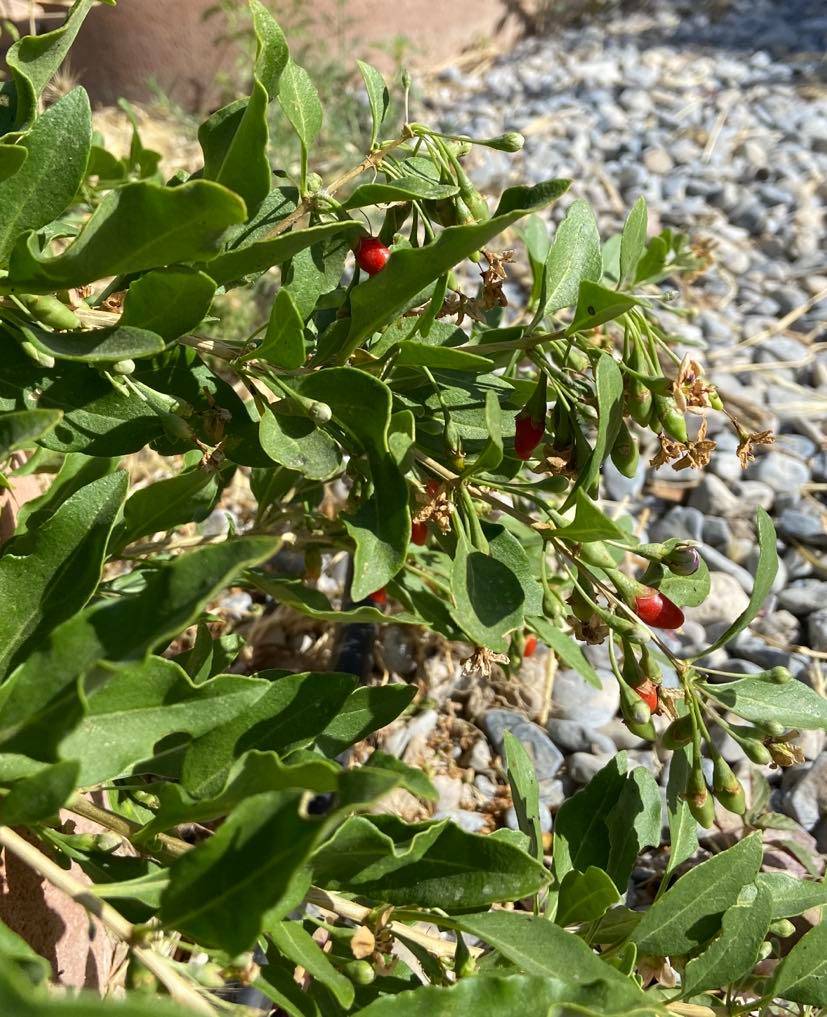 Terri Meehan/Special to the Pahrump Valley Times Goji berries are an edible perennial that thrive in our heat. They also make an attractive landscaping border when pruned.

Every year in my garden, I strive to plant more and more edible perennials. The ability to plant once and have an increased harvest year after year makes perennials worth their weight in gold to me. Spending less time on maintenance allows for more time to devote to other chores on my little farm. The goji berry bush is one of my favorites in this class.

Goji berry, also known as wolfberry or matrimony vine, is a deciduous woody shrub. It can grow up to 12 feet tall and is slightly thorny. It is a member of the solanaceous family and is related to tomatoes. Goji berry bushes bear tiny purple flowers which produce slightly tart red berries throughout the summer.

Goji berries can be grown from seed or planted from a purchased rootstock. Goji berry seedlings are similar in appearance to tomato seedlings. They can take up to four years to produce so purchasing rootstock will give you a head start on a plentiful harvest.

Pick a spot to plant that receives full sun to afternoon shade. Goji berry does not mind our heavy clay soils. If starting from seed, plant indoors at the same time you start tomatoes. For me, this is early February. If planting rootstock, plant in fall or early spring while the rootstock is still dormant.

When transplanting either a seedling or rootstock, dig a hole twice as deep and twice as wide as the pot the goji berry is already in. Sift large rocks and pebbles from the soil as you dig it out. Mix the sifted soil with an equal amount of compost or a high-quality purchased garden soil. Scoop about one-third of the mixed soil back into the planting hole, leaving a depression in the middle for your seedling.

Tip your goji berry on its side and give the pot a gentle roll back and forth while lightly sliding the seedling out. Slightly tease the roots to break up any compaction and place the berry into the hole. Backfill more of the mixed soil into the planting hole while covering the roots but not the stem of the seedling. Use the remaining soil to create a ringed basin of at least 2 to 3 feet in circumference around the goji berry.

Mulch the basin with a light-colored mulch such as leaves, straw or used animal bedding that has been left to sit for a few months to a depth of 2-3 inches. At this point, flood the basin with a gentle stream of water until the basin is full. It should take less than 5 minutes to fill the basin.

Over the next week, continue to flood the basin every other day or daily if the soil dries out quickly. You want to the soil to remain damp but not flooded between watering. After the first week, water the berry on a weekly basis by flooding the basin as you did before. Goji berries do not need much water, even through the hottest part of the summer. As summer approaches increase watering to twice a week. As we move into winter, cut back on watering to once a month.

Once winter arrives, goji berries will drop their leaves, revealing their woody stems. If you choose to prune your goji berry bush, do so in the winter when the plant is dormant. Some gardeners like to prune their goji berry to one main stem creating a top-heavy bush with a similar shape to a tree. This allows light into the bush and makes it easier to harvest the berries. Pruned goji berry bushes will need to be supported with a stake.

Goji berries, like most berries, can be kind of a pain to pick. If you want to enjoy the berries fresh, you will need to move quickly when you see their color changing from green to red because they will dry rapidly on the vine. If they do dry on the vine, they can still be eaten and are like a raisin in texture.

One of the easier ways that I have found to harvest the berries is to take a clean pillowcase and wrap it around a berry-laden branch. I give the branch a good but gentle shake, and the berries fall into the pillowcase. The drawback to this is that sometimes-unripe berries will fall, too. I let the unripe berries sit in a berry clamshell container on the counter, and they usually ripen within a few days.

Goji berries can be dried for storage or frozen for use in the winter. I dry goji berries first by giving them a quick rinse and then laying them in a single layer on a parchment-lined baking sheet covered with a towel. They usually are dry within a few days. Once the berries are dry, I pour them into pint-sized mason jars and tightly seal with a vacuum sealer. I love to add dehydrated goji berries to jalapeño cornbread, soups and stews.

Overall, the upkeep for just a few goji berry plants takes less than a few hours per year. The fact that you only have to plant it once makes this tart little berry an even sweeter deal.