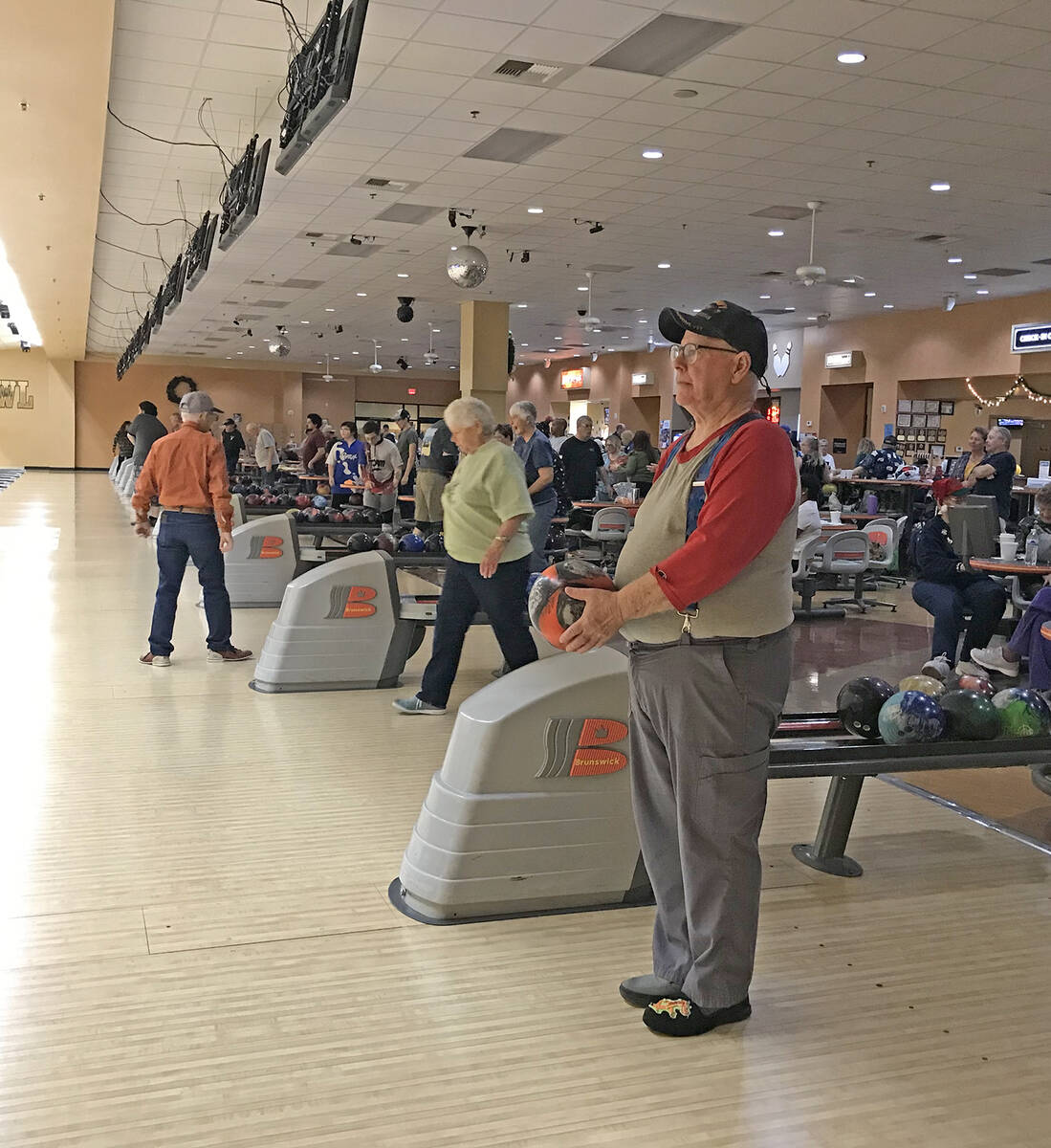 Robin Hebrock/Pahrump Valley Times A bowler pauses to ready himself before launching his ball down the lane during the Wounded Warrior Bowl-A-Thon. 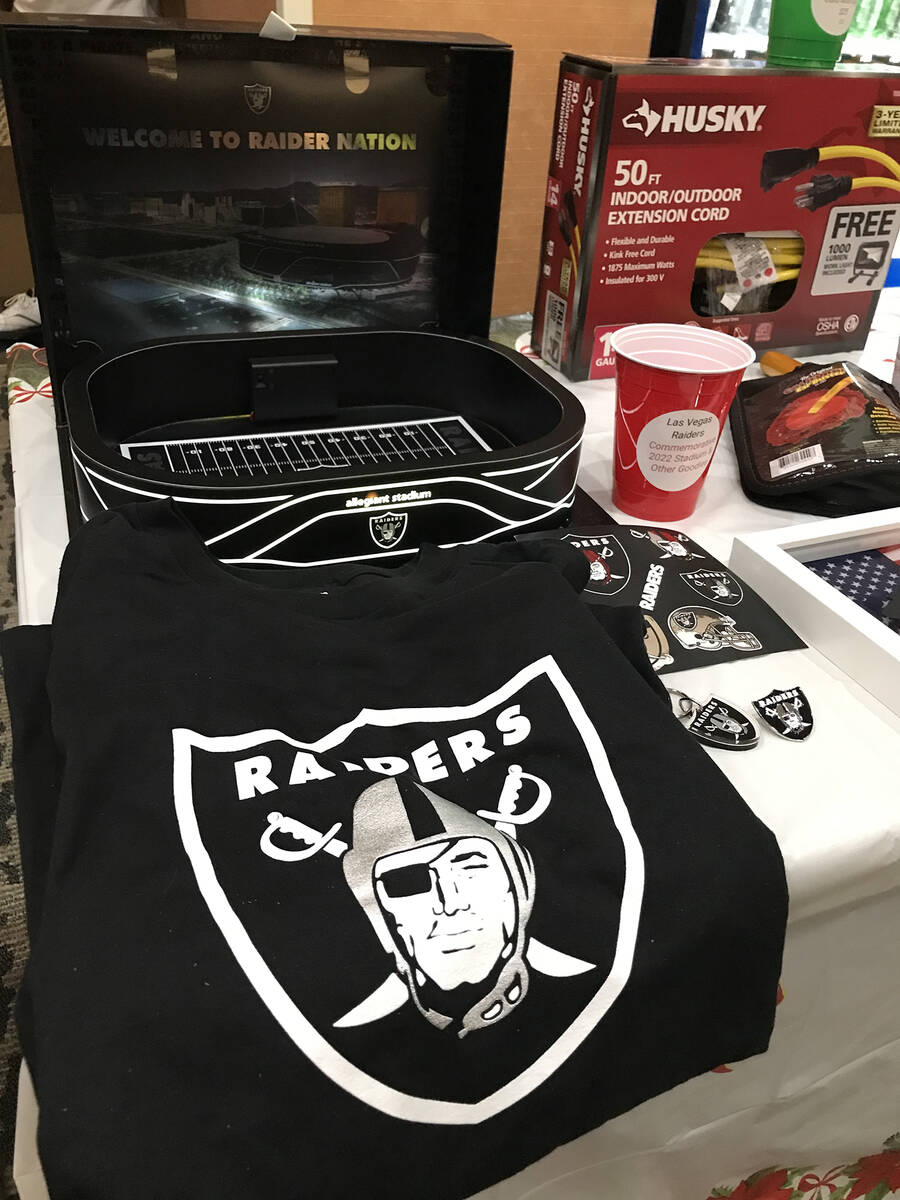 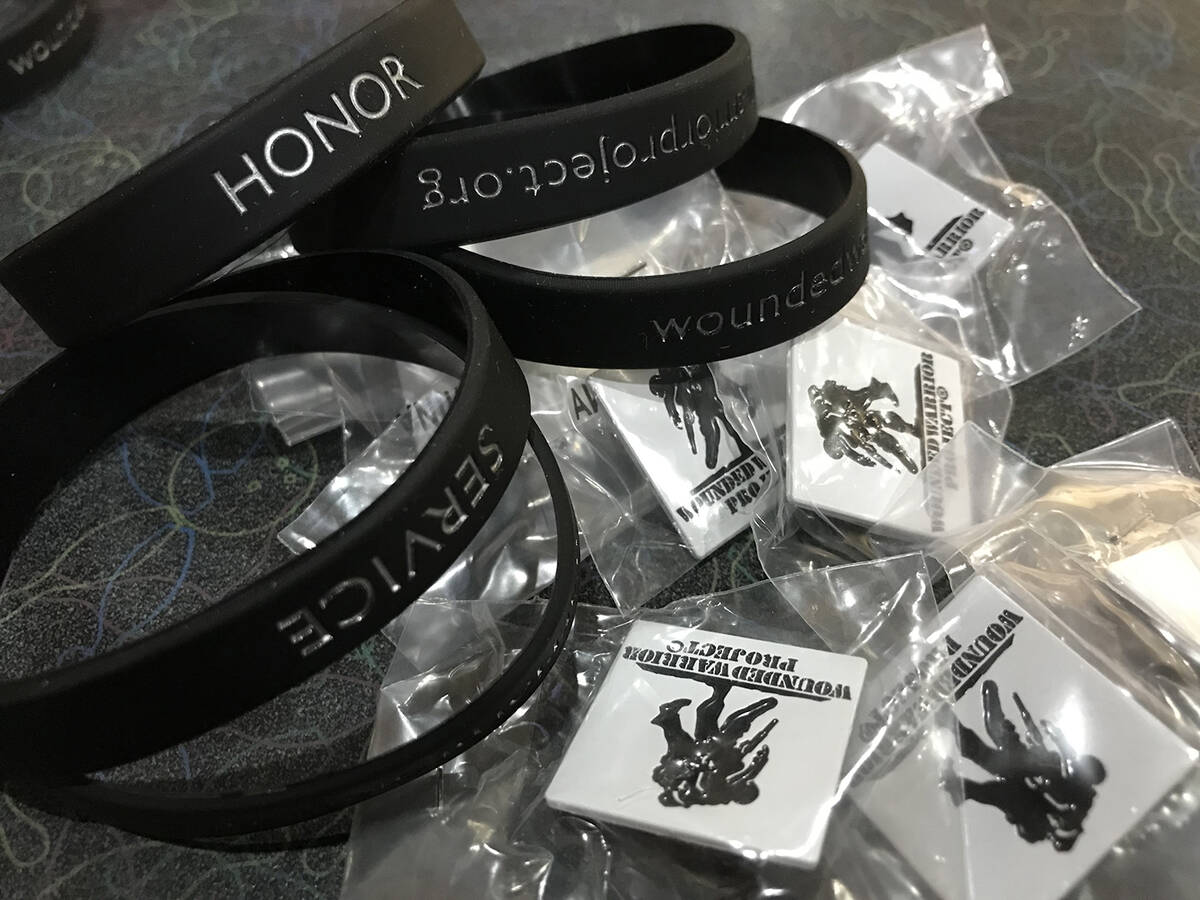 Robin Hebrock/Pahrump Valley Times Schwag such as Wounded Warrior bracelets and lapel pins were handed out during the Bowl-A-Thon hosted to support the nonprofit. 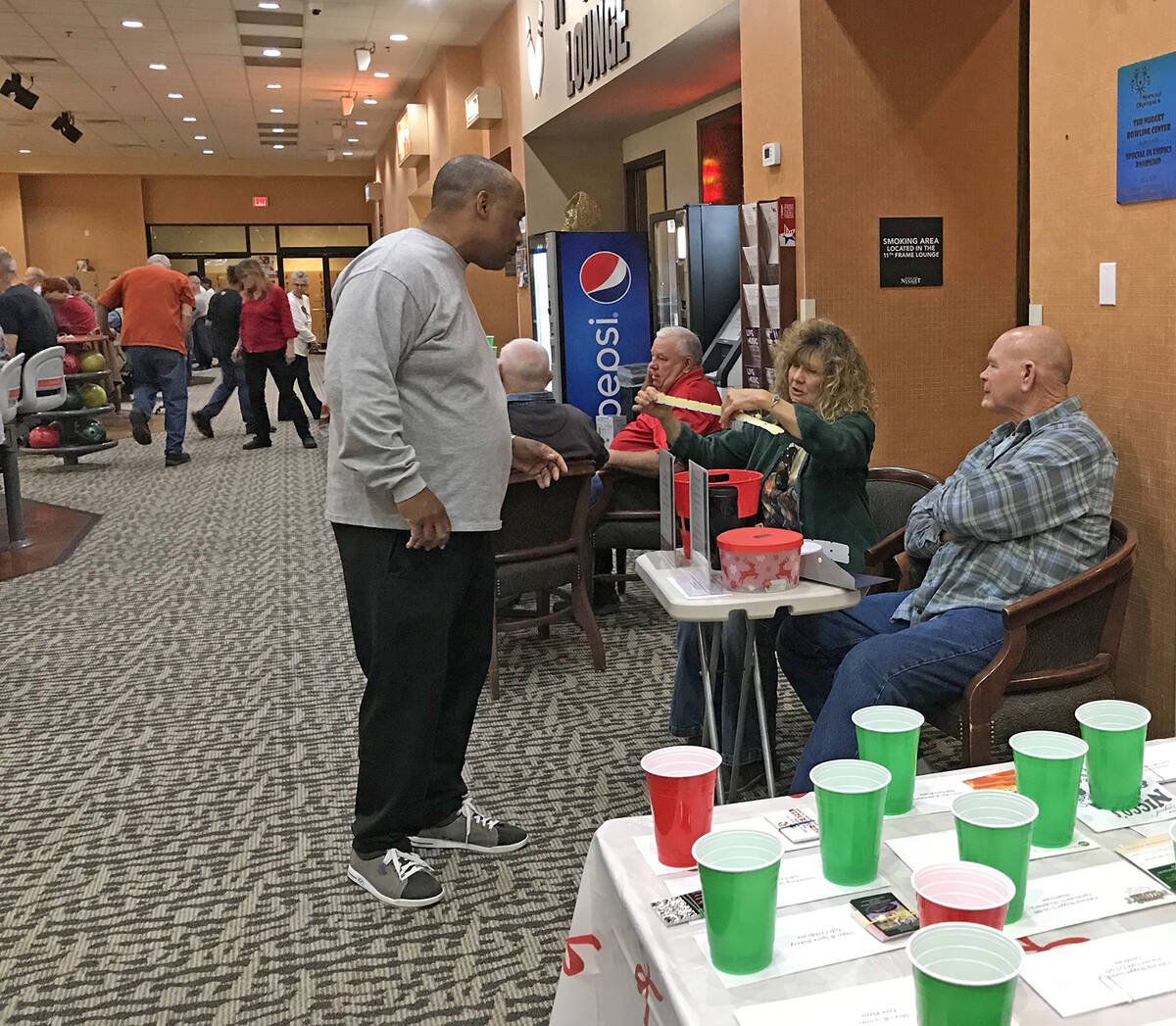 Robin Hebrock/Pahrump Valley Times Terri Johnson is pictured counting out raffle tickets for a patron of the Wounded Warrior Bowl-A-Thon. 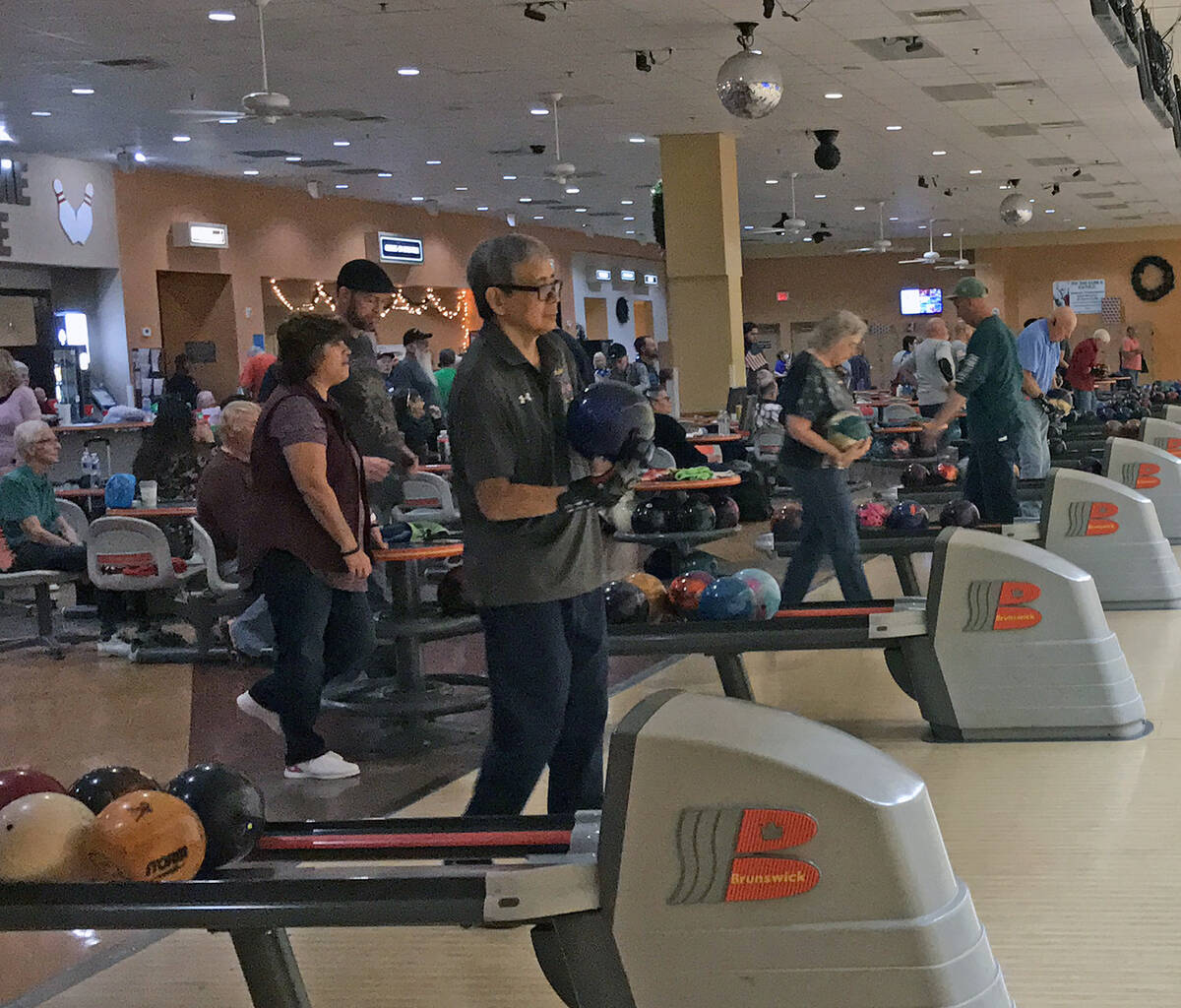 Robin Hebrock/Pahrump Valley Times All of the bowling lanes inside The Nugget Bowl were bustling during the Bowl-A-Thon. 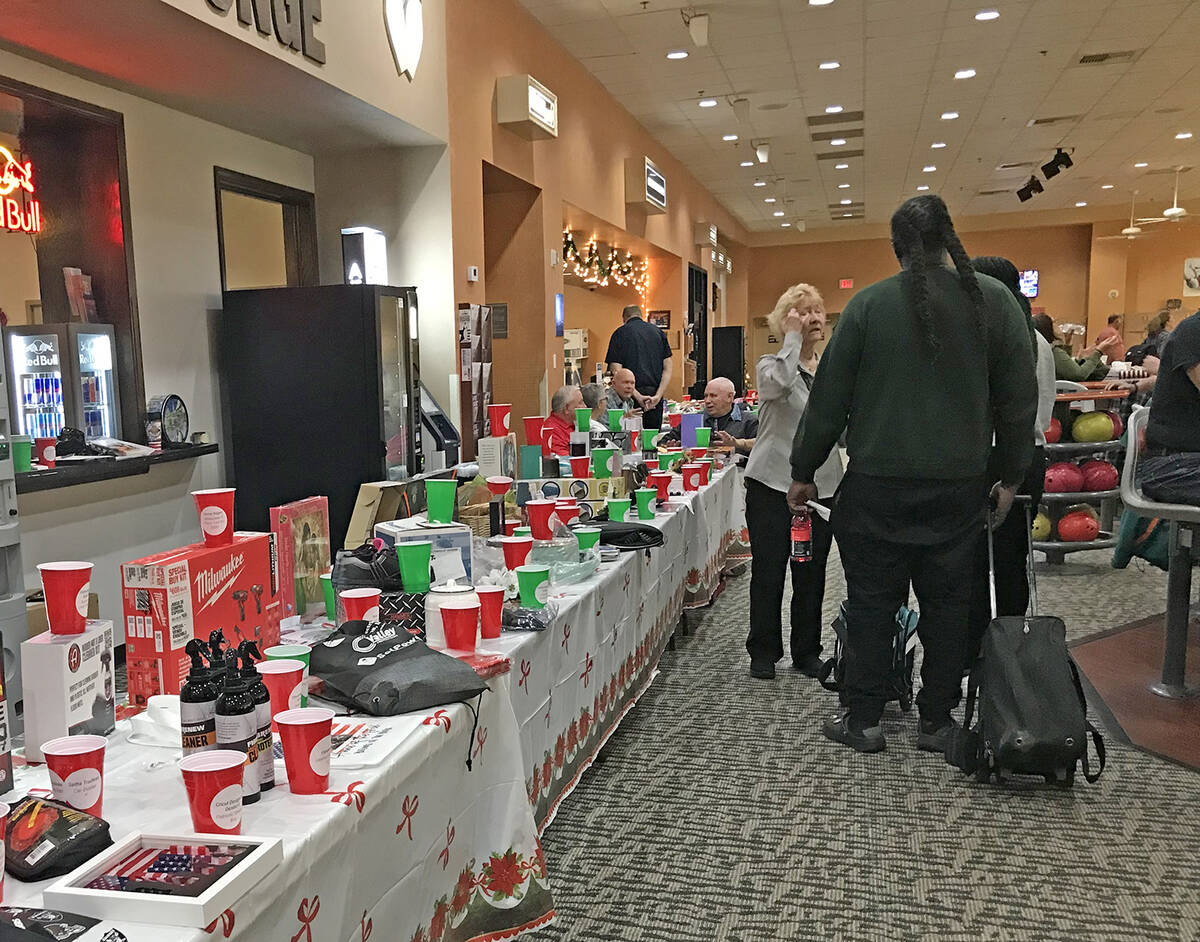 Robin Hebrock/Pahrump Valley Times Several tables were set up to display the incredible array of raffle prizes that had been donated to bolster the Wounded Warriors Bowl-A-Thon. 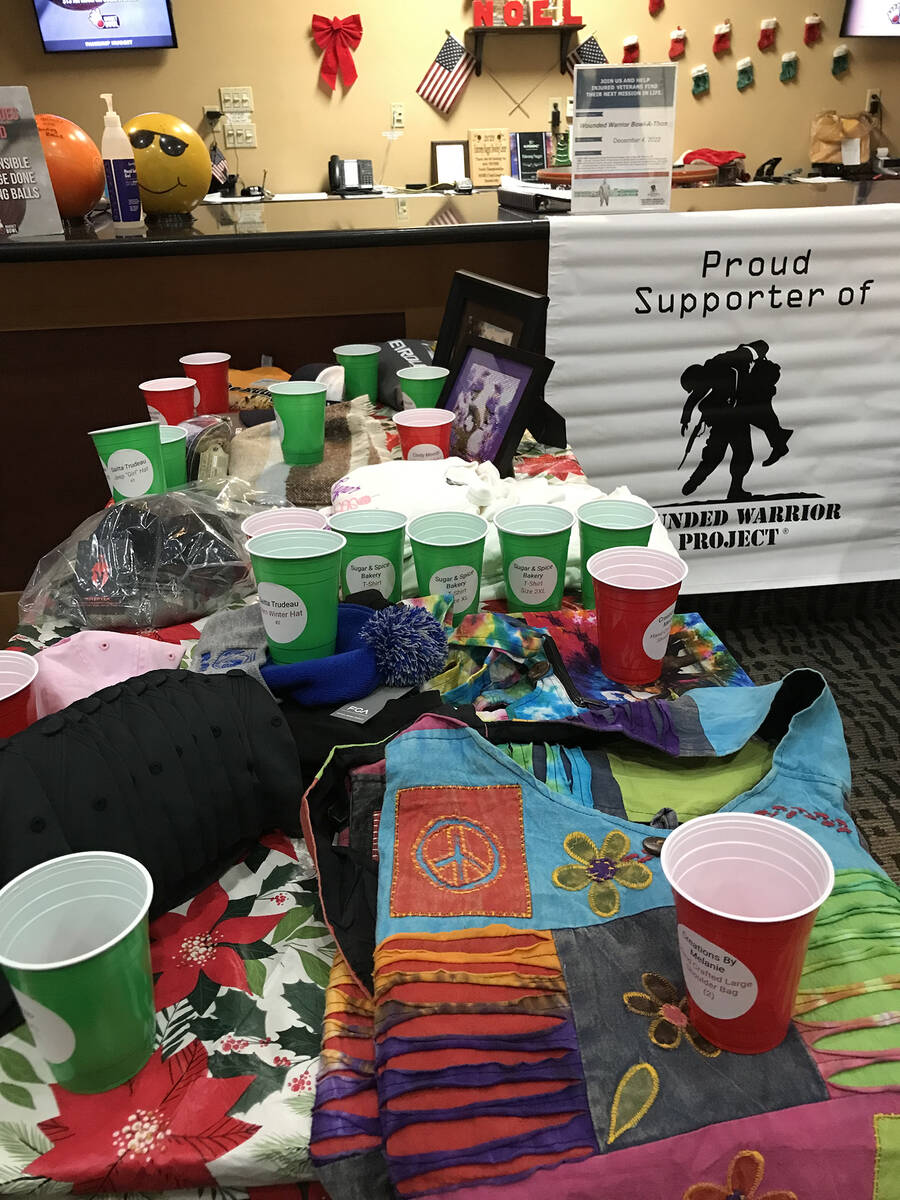 Robin Hebrock/Pahrump Valley Times There were so many raffle prizes at the Wounded Warrior Bowl-A-Thon that organizer Denise Flanagan had to erect additional tables to accommodate them all. 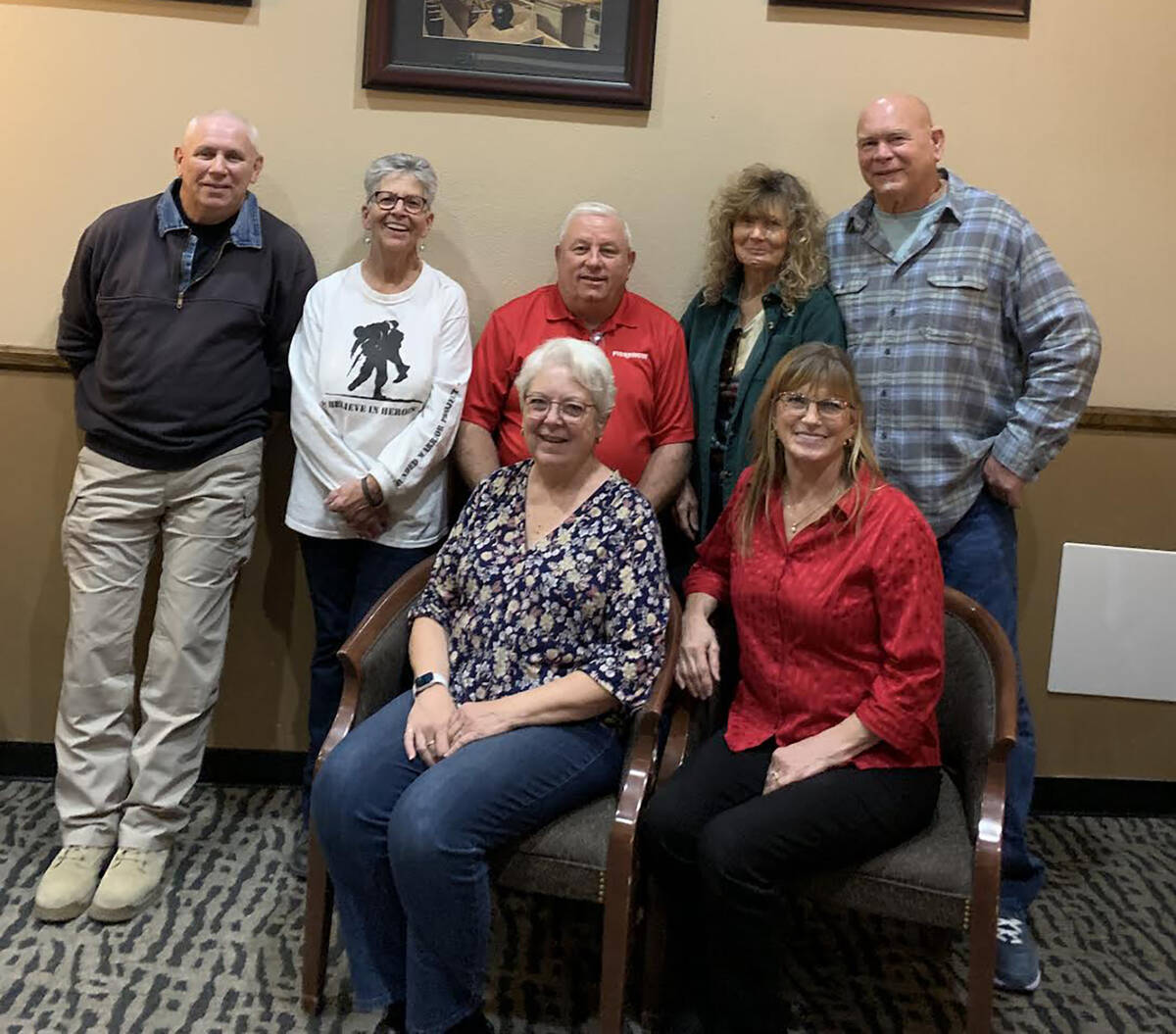 Special to the Pahrump Valley Times In front are Eileen Sivley, left, and Theresa Goldstein, while at back stand, from left to right, Rich and Denise Flanagan, Jeff Sivley and Terri and Wayne Johnson, the crew that made the Wounded Warriors Bowl-A-Thon possible.

The Nugget Bowl inside the Pahrump Nugget Hotel &Casino was packed with patrons on Sunday, Dec. 4 taking part in more than just an afternoon of fun.

Thanks to the work of local veteran Denise Flanagan and her team of supporters, the day was dedicated to raising funds for a cause that is quite close to Flanagan’s heart, the Wounded Warrior Project.

Kicking off at 11 a.m. on Sunday, the Wounded Warrior Bowl-A-Thon included games of 9-pin, no-tap bowling for just $10 as well as a huge array of prizes up for raffle, all of which contributed to bringing in thousands of dollars that will ultimately be used to facilitate programming geared toward helping former military service members heal and move forward in their lives.

“This event was a huge success!” Flanagan raved afterward. “We raised $3,407 as well as $1,000 from my Facebook fundraiser! The support from the people of Pahrump is totally overwhelming. Not just the businesses who contribute for the event, or who donate money, but those who also physically attend. And we have a huge veteran base in our town.”

Flanagan remarked that the raffle prizes ranged from wine baskets and restaurant gift cards to massage certificates and so much more.

“We received so many different types of items to raffle, we had to add three additional tables!” A delighted Flanagan reported. “The biggest raffle item this year was from the Las Vegas Motor Speedway for four tickets to the March 2023 Pennzoil NASCAR Cup race. The value of that? An amazing $980! That raffle alone raised over $400.”

Flanagan selected Wounded Warrior Project as the beneficiary of her efforts because she has seen firsthand the effects of war on military personnel.

“It’s easy to see a physical injury but not so for a hidden one such as post-traumatic stress, anxiety or depression. These are the personnel we need to focus on because they feel no one would understand, again, because we can’t see it,” Flanagan said. “And people continually ask me why I do this. Here is my reason: I was going around to businesses asking for items for the raffle. I came out of a business and a man, on crutches and missing part of his left leg, came up to me and asked me about the sticker on my car.

“It was a Wounded Warrior sticker,” Flanagan continued. “I explained what the organization was about. He lost part of his leg in a roadside bomb in the Middle East and had been trying to receive help from the VA, with no success. I gave him a brochure and my card and told him to contact Wounded Warriors. A month later, I received a call from him. He told me he’d contacted them, they verified his military service and they were going to help him receive his prosthetic leg. And that is why I do what I do!”

The Wounded Warrior Bowl-A-Thon may be the brainchild and pet project of Flanagan but she could not do it all alone and she made certain to shine a spotlight on those who made this year’s event such a success.

“Thanks also to the Las Vegas Raiders, Las Vegas Motor Speedway, Mister Tater’s Tater Shack, Cricut by Denise K, Sheryl Hunter, R&J Johnson, Denise and Rich,” Flanagan continued. “Thank you to Over the Hump Saver for their advertising of my event and to Robin Hebrock from the Pahrump Valley Times for her continued support of my mission. And to my crew, which included myself, Rich Flanagan, Jeff and Eileen Sivley, Terri and Wayne Johnson and Theresa Goldstein, as well as to the Nugget Bowl crew, Mike Sherard, Randy Cardiff, Lorie Hartwell, Daley Blysdeth and Kalani Cambra, who worked for months signing people up and supported us on the day of the event. This was my fifth event and with all of them calculated together, we’ve raised around $12,000. Not too shabby!”