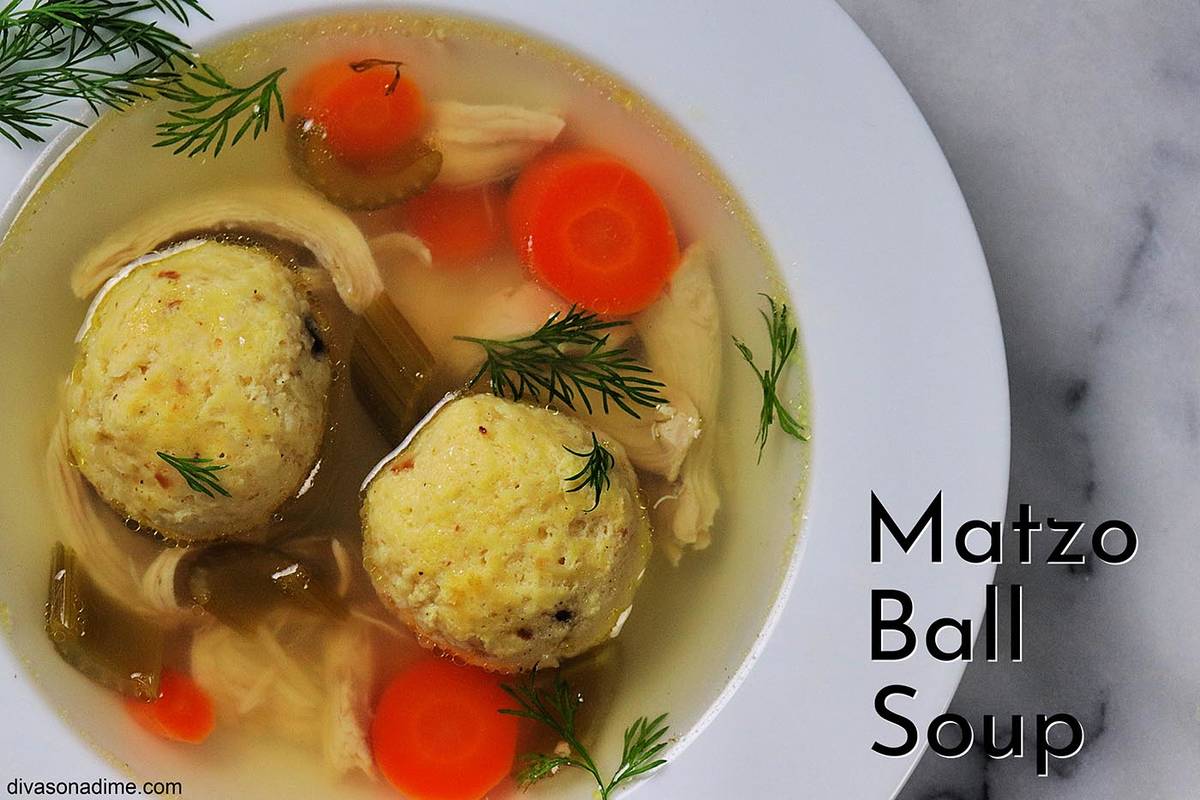 Patti Diamond/Special to the Pahrump Valley Times Matzo ball soup is a traditional offering during Passover, which begins this Saturday. Passover commemorates the Israelites’ Exodus from Egypt, and their transition from slavery to freedom.

Matzo ball soup is a traditional offering during Passover, which begins this Saturday. Passover commemorates the Israelites’ Exodus from Egypt, and their transition from slavery to freedom. One of the dietary practices observed during Passover is the absence of foods with leavening. That’s where the matzo comes in, as it’s an unleavened cracker.

This recipe calls for schmaltz, which is rendered poultry fat and it’s crazy delicious. Schmaltz adds richness and tremendous flavor to the matzo balls. Should you choose not to use schmaltz, you can substitute olive oil, vegetable oil, or coconut oil.

First, we make a rich broth, as we render a little chicken fat (schmaltz!) for the matzo balls. Then we prepare and cook the matzo balls in the soup.

3 chicken breasts – must be bone in, skin on

For the Matzo Balls:

In a stock pot with a lid, begin heating 5 quarts of water. Remove the skin and any visible fat from the chicken breasts and reserve. Place chicken breasts in the pot. Reserve 4 ribs of celery and roughly chop the rest. Reserve 3 carrots and roughly chop the rest. Smash the garlic cloves. Cut the onion into quarters, reserving about a tablespoon for the schmaltz. Put the chopped veggies in the pot. Once the water boils, lower the heat to maintain a gentle simmer and set a timer for 30 minutes. From this point on, don’t let the soup come to a rolling boil or the broth may become cloudy.

Meanwhile, place the chicken skin, 2 tablespoons of water and about 1 tablespoon minced onion in a small pan set on very low heat to render the fat.

At 30 minutes, remove the chicken breasts and let cool enough to touch, separate the breast meat and put in the fridge, then put the bones back in the pot. At this point you can walk away for an hour while the broth simmers and the fat renders.

After an hour, remove the fat from the heat, let cool and measure the amount rendered. We’re hoping for ¼ cup. If it’s less than that add your oil of choice (olive, vegetable, coconut) to make ¼ cup.

In a mixing bowl, whisk the matzo meal, salt, baking powder, onion powder, and garlic powder. In another bowl whisk together the eggs, broth (cooled if from the pot), and schmaltz. Add that to the matzo mixture, stirring until combined. Cover the matzo mixture with plastic wrap and refrigerate for 20 minutes to absorb the moisture until quite firm.

Meanwhile, carefully remove and discard the veggies and bones from the broth. Strain the broth through a mesh strainer to remove any rogue bits. Place the broth back in the pot and heat to a simmer. Slice the reserved carrot and celery, shred the chicken breast, and add them to the broth. Add salt and a few sprigs of dill.

Retrieve the matzo mixture and form it into about 24 walnut sized balls. Drop the balls into the simmering soup and cover for 30 minutes without removing the lid. Seriously, don’t peek. They need the steam. Make sure the soup is gently simmering the entire time. The balls will double in size as they cook.

To serve, place two matzo balls in a bowl and ladle soup over the top. Garnish with fresh dill.

To store leftover soup, remove the matzo balls and store separately or they get mushy and make the broth cloudy.

Every family has their own way of making chicken soup, this just happens to be my family’s favorite. Now, I don’t pretend that this recipe would fool the folks at Katz’s Delicatessen, but it’s really delicious.