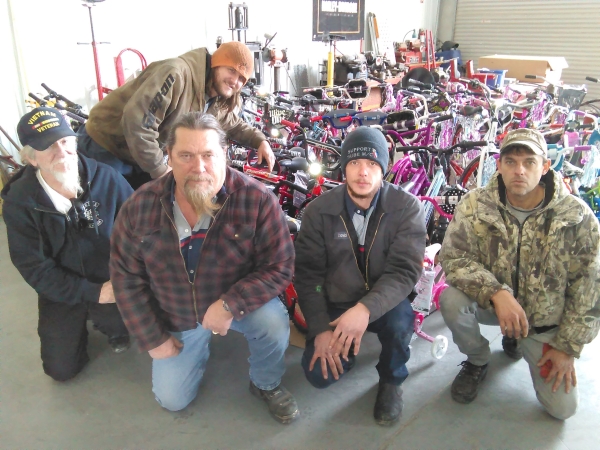 Residents who see upward of 100 motorcycles roaring down the roadways of Pahrump need not worry about trouble this weekend.

Members of Pahrump’s Tribe Motorcycle Club will be on the streets in the name of goodwill, generosity and Christmas spirit.

The spectacle is part of the annual Oasis Outreach Christmas Toy Run.

Ralph “Red” Pillman, international president of the motorcycle club said he and fellow members will deliver donated toys to dozens of families once again this year.

“The families are selected through the different community outreach organizations who get ahold of us,” he said. “It’s amazing to see the kids’ eyes light up when we arrive. We have the first run on Dec. 13, for 26 families and again on the 20th for 26 families. Last year we went three days after Christmas to deliver the toys and it was tremendous.”

Enck’s Auto at 1820 West Mesquite is one of several locations in town where an unwrapped toy can be dropped off.

“Walmart always comes through for the Tribe Motorcycle Club,” he said. “They gave us a discount. A lot of other people stepped up for this. We have more than 50 bikes right now and we are shooting for about 65. Red said he would like to give every child a bike if he could. That’s probably not going to happen, but a lot of kids will be getting one.”

Along with the toys, Enck said the families will also enjoy a holiday dinner, with all the fixings.

“Walmart also discounted turkeys, potatoes and other things that we need,” he said. “We’ve got a hundred turkeys we will be picking up on Saturday for the run and about a thousand pounds of potatoes, along with the other stuff for their meal so they get a meal with the toys. I think this is 20 years that we have been doing this.”

Leading a caravan of 100 motorcycles, cars and trucks is never an easy task in any town.

Last year the Tribe had 99 motorcycles and roughly 30 other vehicles carrying food, toys and bikes.

Pillman said this week he’s prepared a plan to arrive at the families’ homes safely without having to make left turns.

“We prefer to make all right turns because we want to keep everybody together where there is a safe environment,” he said. “When you have a big train like that, you have to keep it organized.”

Organization and brotherhood are some of the traits Tribe Motorcycle Club members adhere to.

Enck said that virtue was witnessed while he and other Tribe members made a run to Mexico recently and met another motorcycle club from Arizona.

“We got to be friends with them while we were there,” he said. “The guy got ahold of me and told us he can’t make the run, but he would like to donate so he sent us a $100 cashier’s check and that’s pretty cool because people are helping out even though they don’t even live in this area.”

“One lady who works at Irene’s as a bartender has a daughter who wanted to give,” he said. “Her mom was showing her what we are doing and this year, they just filled the box in the office with toys.”

As an added treat for the families, Enck said along with the dinners and toys, the families will be treated to the gift of song, as members will also perform Christmas carols.

“We try to sing as best as we can but nobody seems to mind because we’re giving the kids gifts,” he said with a laugh.

“They provide food every day except for Saturdays,” he said. “On Saturdays I take care of the needs of the people who come in for church. The other six days, through Smith’s we glean food and things like that. We also get commodities from Las Vegas and I also have people out of Las Vegas who help us out.”