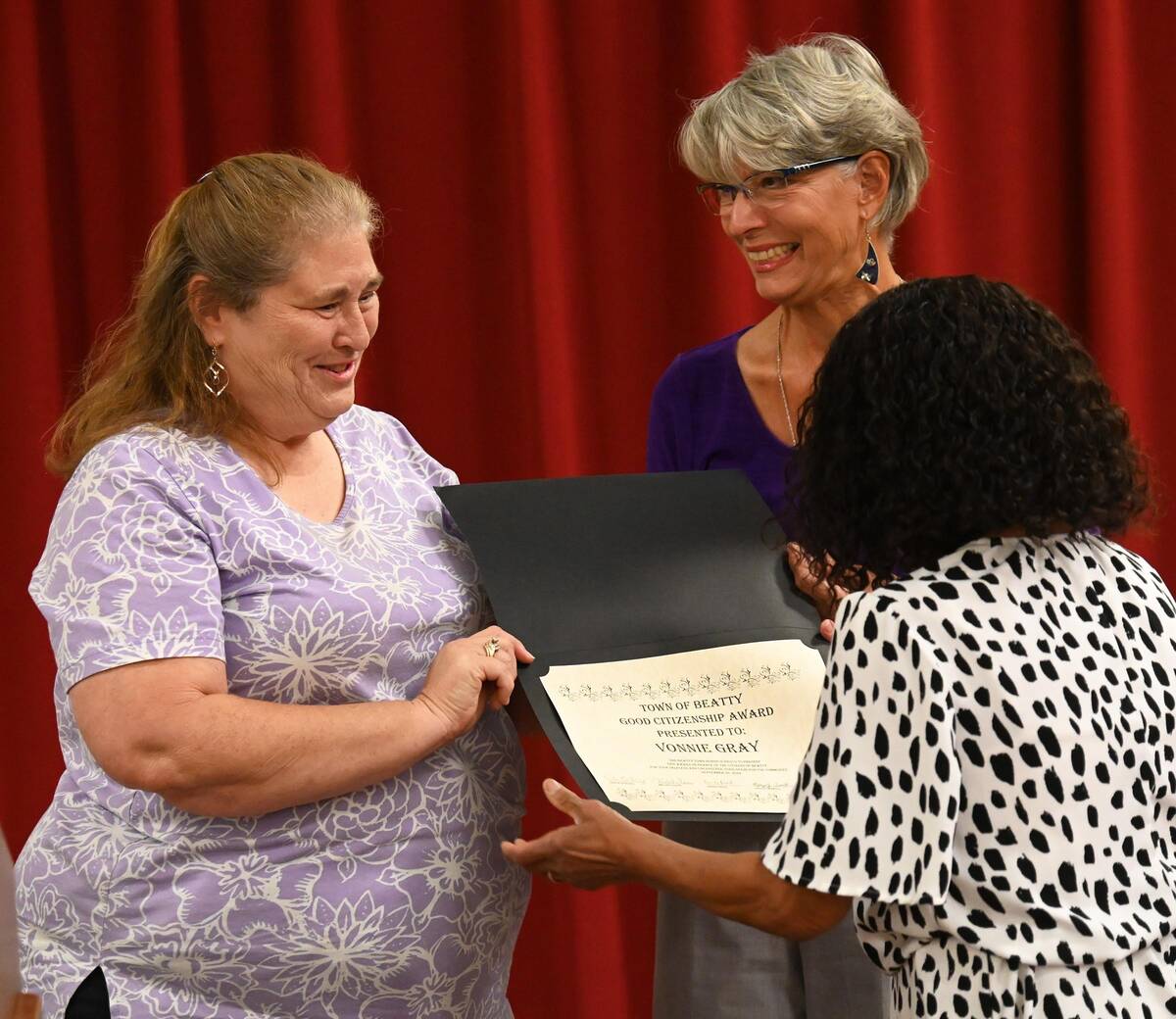 Richard Stephens/Special to the Pahrump Valley Times Vonnie Gray (left) receives the Beatty Good Citizenship award from board chair Erika Gerling (back to camera) as Patti Butler, who helped with the presentation, looks on. 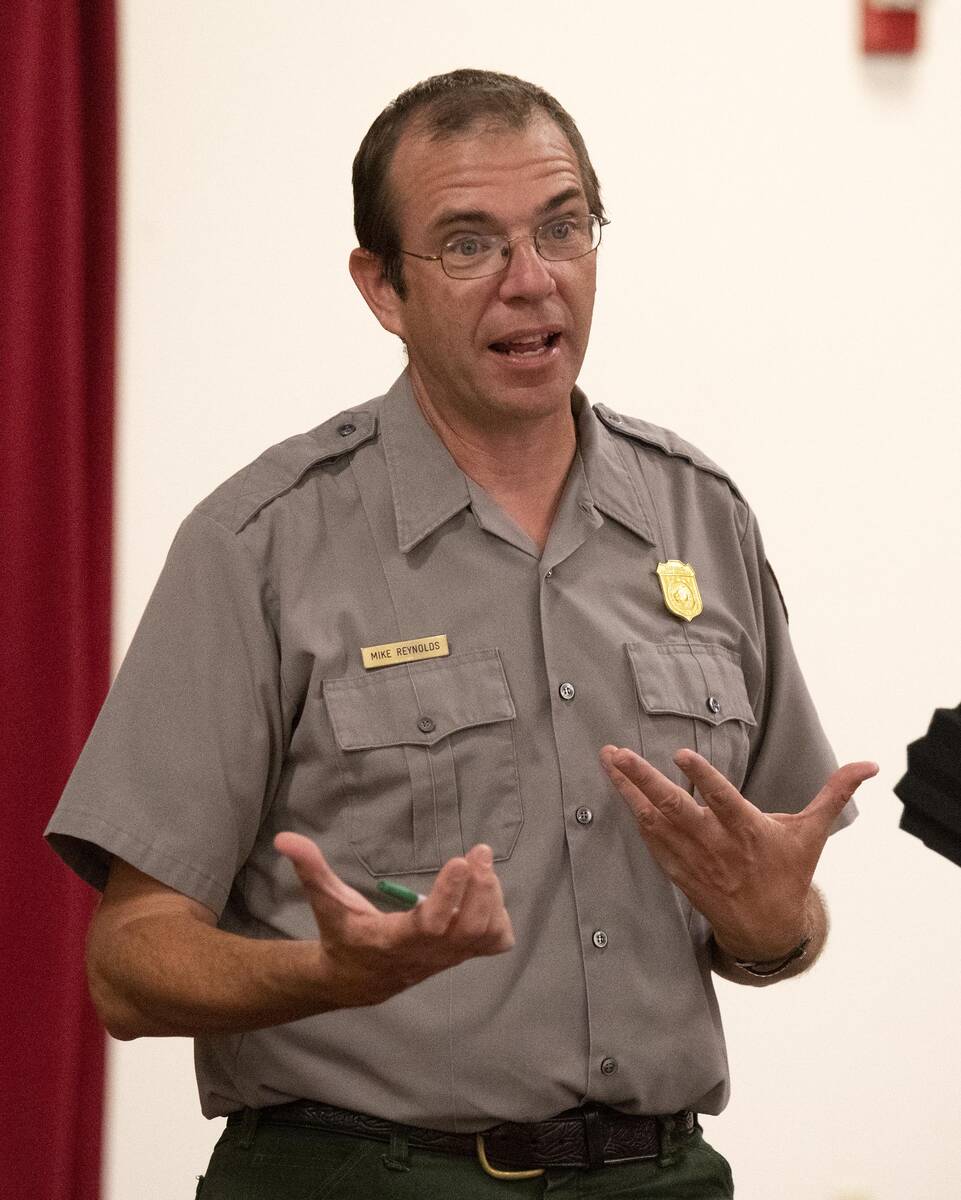 The Beatty Town Board presented its rare Good Citizenship award to longtime Beatty resident Vonnie Gray at its Sept. 26 meeting.

Gray taught in Beatty schools for 20 years, and has been engaged in a number of community organizations.

Along with Claudia Reidhead and Mary Revert, Gray was instrumental in the establishment of the Beatty Museum and Historical Society and served on the museum’s board of directors.

She also served as an officer in the Beatty Senior Center and helped with the forming of the nonprofit Beatty Seniors, Inc. which now operates the center. At the award presentation, Marty Campbell said that without her the organization “wouldn’t be up and running,” noting that she did the paperwork involved in forming the nonprofit.

Gray was active in Beatty’s Hilltop Baptist Church, where she served in various capacities, including organizing summer Bible camps for youth, and providing musical accompaniment. She served as an interim pastor for a time and set up commodities distribution and a community food pantry.

Gray and her husband are relocating to Arizona, but she said that she feels good that others have stepped up to take on the work she was doing. She encouraged others to serve the community, saying, “If you’re not serving, you’re not living.”

Also at the meeting, Death Valley National Park Superintendent Mike Reynolds and Management Analyst Abby Wines gave the board a presentation on flood damage in the park and on the status of repair efforts.

The superintendent said that the park has a special relationship with Beatty and appreciates how much the town cares about the park. He expressed gratitude for the back-up assistance the park receives from Beatty EMS services.

Wines talked about the damage done by flooding to many roads in the park, not just from the August 5 event, but from floods that kept happening during the monsoon season this year.

The Beatty Cutoff Road is scheduled for earliest repair possible, but the contractor will be starting work two weeks later than originally anticipated, which pushes the possible reopening of that road from mid-October to the end of the month.

Wines also gave an update on the status of Scotty’s Castle, the restoration and reopening of which has taken much longer that anticipated and was further set back by a fire in the former visitors center. She said that they recently were able to contract the HVAC work on the Castle, and that “if everything goes like clockwork, which it seldom does,” it could reopen by the end of next year. The project includes some upgrades of infrastructure and new flood control measures.

The board approved sending a letter to “Beatty’s elected and non-elected officials” asking them to recognize and support the park’s repair and restoration efforts. Reynolds said he was happy to see this because such a letter, showing the importance of park tourism to the local economy, could help in securing funding from Congress.

The board approved the waiving of fees and deposits for use of the community center and town equipment for Beatty Days.

They also approved the expenditure of $5,057 for new multi-channel pagers for the Beatty Volunteer Fire Department, with the money coming from the Public Safety Tax fund. These are the pagers that are being adopted county-wide.

The board set Oct. 24 at 5 p.m. as the deadline for letters of interest for the advisory board seats currently held by Kelly Carroll, Perry Forsyth, and Melody Koivu. If more than three letters of interest are received, an informal election is scheduled for Nov. 14 from 5:30 to 6:50 p.m.

Following instruction from the county manager, the board rescinded two agenda items from previous meetings involving presentations by sheriff candidates Joe McGill and Sharon Wehrly. They now know that such presentations cannot be part of their agendas, and that it is up to independent community groups or individuals to organize such things as candidate nights.