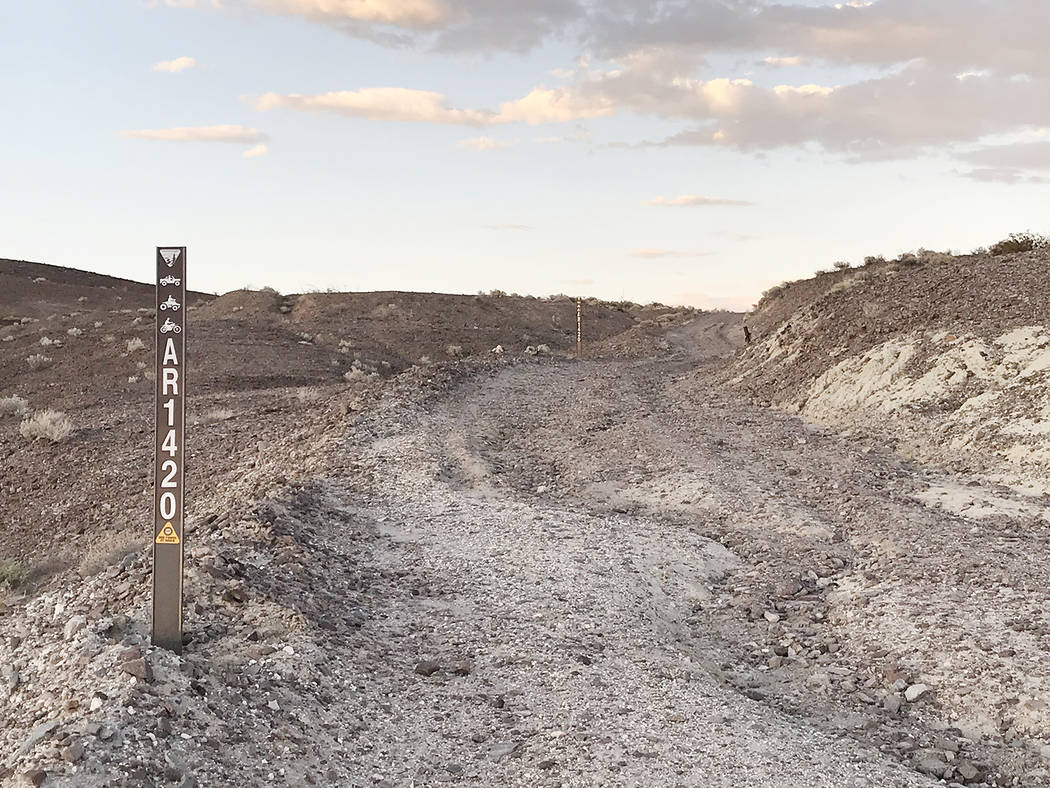 Robin Flinchum/Special to the Pahrump Valley Times This photo taken in the Tecopa area shows one of the markers. A town hall meeting with regional BLM field representatives was held in Tecopa recently. 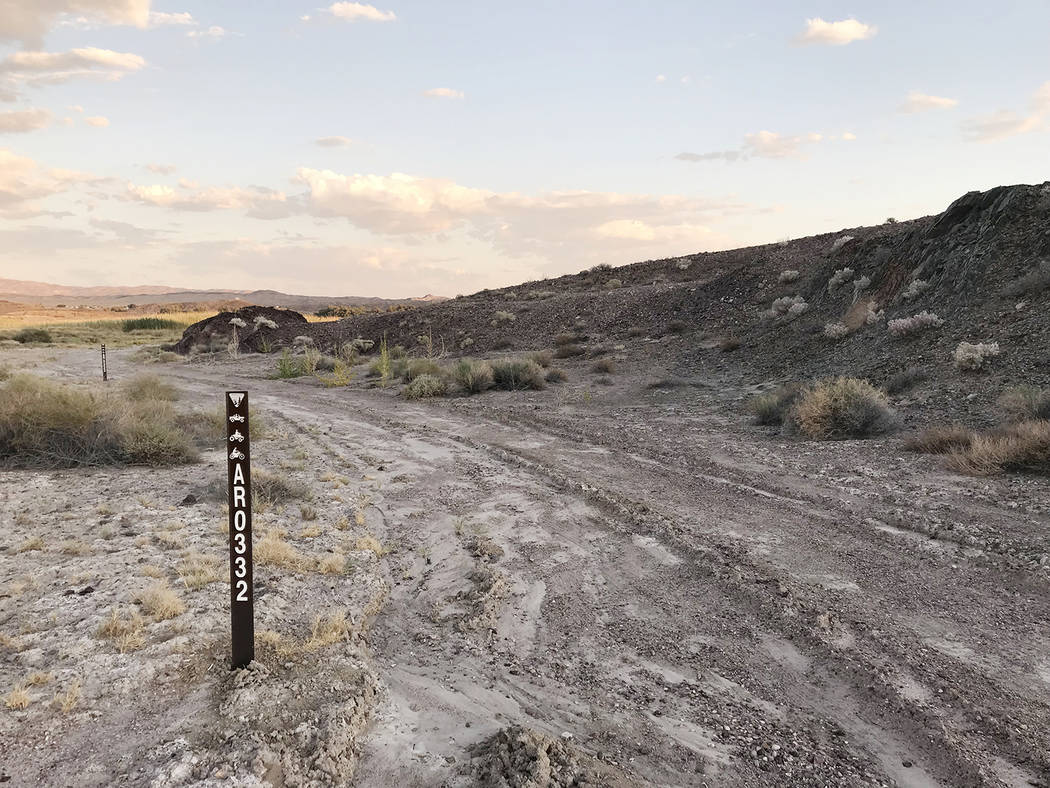 Robin Flinchum/Special to the Pahrump Valley Times A look at markers in question as shown in one Tecopa location. While the signage is new, said Katrina Symons, BLM Barstow Office field manager, the routes are not. 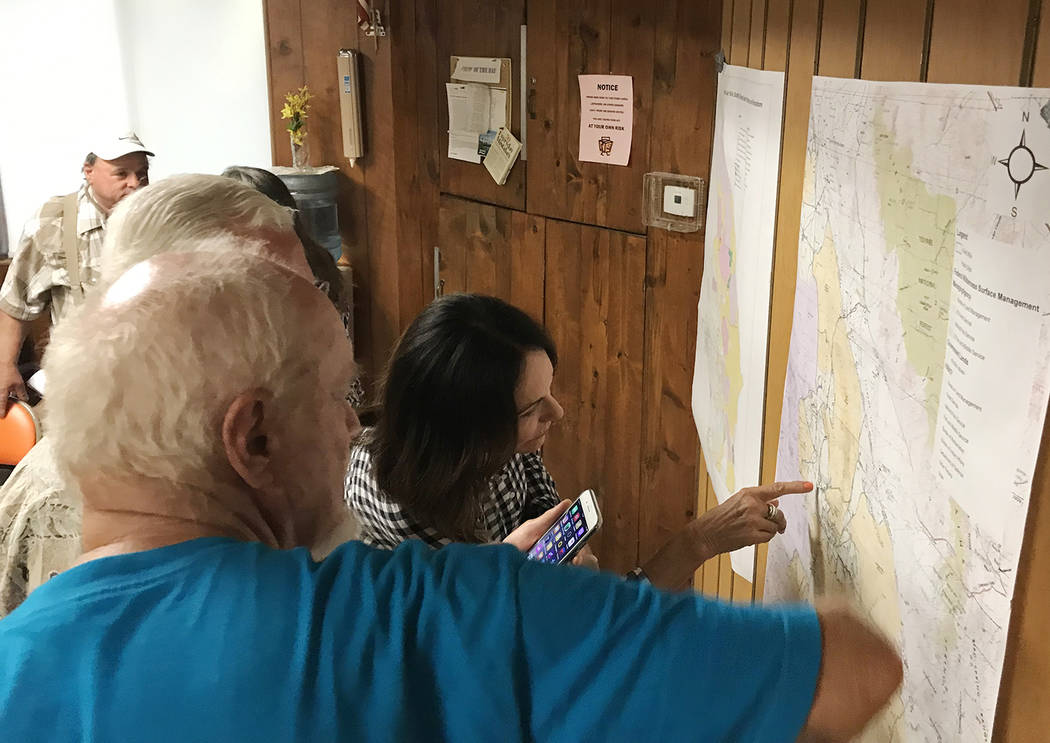 Robin Flinchum/Special to the Pahrump Valley Times Meeting attendees in Tecopa examine an off-highway vehicle route map provided by the BLM at the town hall meeting. 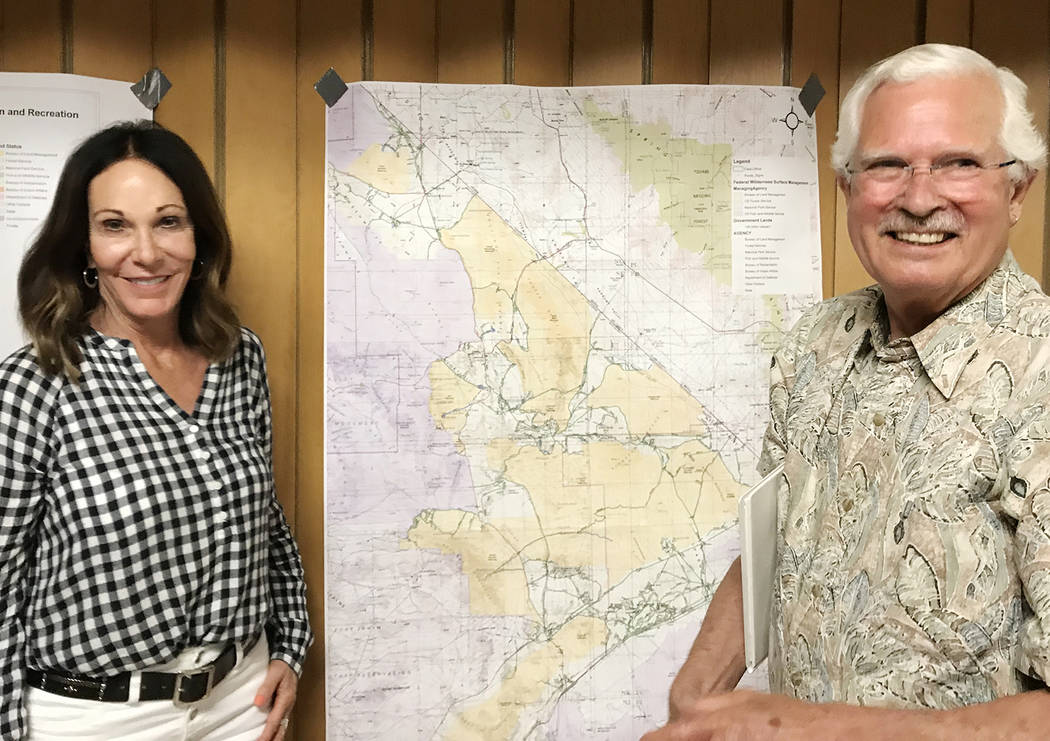 Robin Flinchum/Special to the Pahrump Valley Times Susan Sorrells of Shoshone Development and Jack Prichett of the Old Spanish Trail Association by an off-highway vehicle map at the meeting. 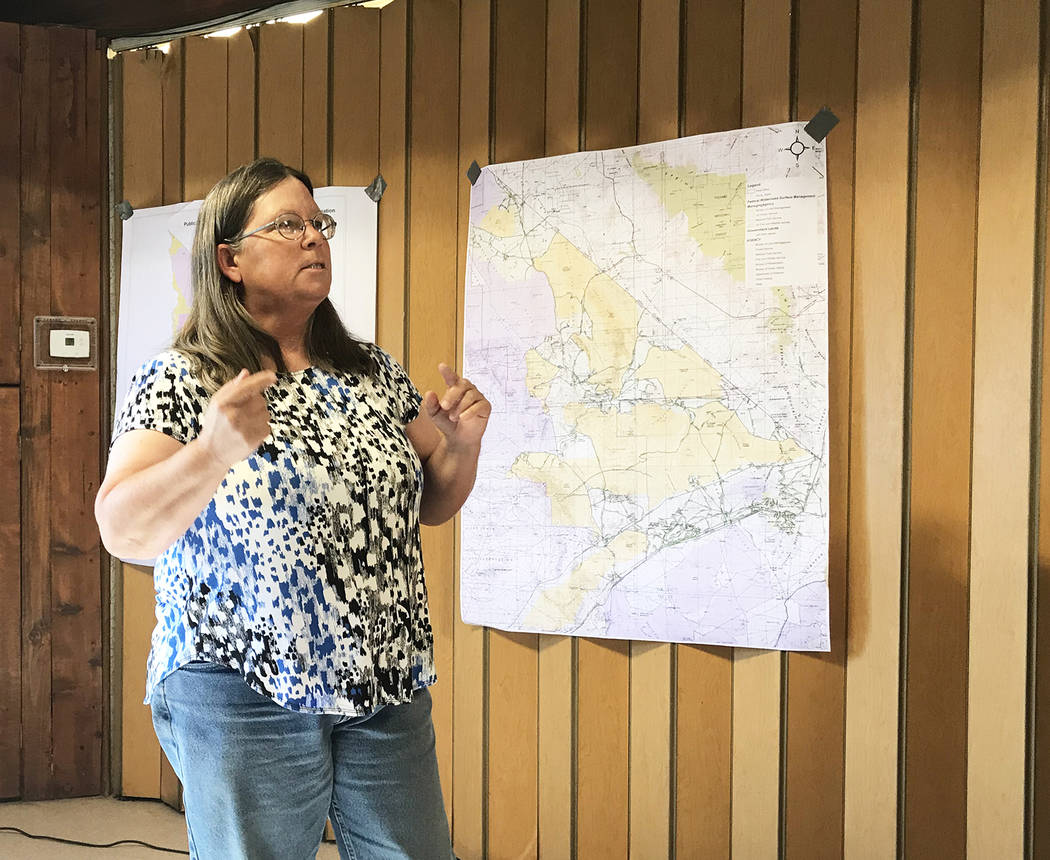 Robin Flinchum/Special to the Pahrump Valley Times BLM Field Agent Katrina Symons answers questions at the meeting. While the signage is new, she said, the routes are not.

Impassioned residents of Tecopa and Shoshone turned out for a town hall meeting with their regional BLM field representatives in Tecopa recently to ask about the sudden appearance of markers designating off-highway vehicle routes in the area.

Representatives from the Inyo County Sheriff’s Office, California Highway Patrol and the California Department of Transportation (Caltrans) sought clarification of their responsibilities regarding the new signage.

Representatives from the Center for Biological Diversity, the Shoshone Development Company and the Old Spanish Trail Association sought answers about how a projected increase in off-highway vehicle use attracted by the signs would affect local areas of environmental concern. All of these agencies said they had no prior notice of the project.

Well over a hundred narrow brown markers, called paddles, designating the names of and what kind of vehicles are allowed on each trail, were placed in the area by the U.S. Bureau of Land Management over the past month.

While the signage is new, said Katrina Symons, BLM Barstow Office field manager, the routes are not. “These are long-established trails,” she said.

In 2006, Symons explained, the Northern and Eastern Mojave management plan, referred to as NEMO, designated these already existing trails as off-highway vehicle approved. The signage that is being put into place now, she said, was mandated 13 years ago.

But for local residents, who say they have seen a worrisome increase in off-road vehicle traffic that has already damaged fragile areas of critical environmental concern, the new signage acts as an announcement or invitation for more of the same. “It’s like the Wild West out here,” local naturalist Molly Hansen said.

Childers said the BLM expected the signage to help deter off-route trespassing by clarifying what routes were available for use. He added that he had originally planned to appear before the Board of Supervisors meeting in Tecopa in June to prepare the local community for the upcoming signage project. “But I completely forgot to put it on my calendar,” he said. “My bad.”

Graeff, of the sheriff’s office, expressed concerns about the conflicting mandates in enforcing what kinds of vehicles could travel on which roads in the area, as well as the frequent absences of the BLM ranger assigned to the area. The new signage, he said, overrides off-road rules he has been enforcing for years.

Supervisor Kingsley, who facilitated the town hall meeting, said he plans to work with the BLM on an agreement called a Form 299 that will help clarify the county’s jurisdiction on roads they maintain within BLM lands.

This should also aid law enforcement officers in determining where and when to enforce off-road regulations.

Both agents Symons and Childers were insistent that the signage was permanent and that only an act of Congress could change it in any substantial way. However, Symons said a ‘miniature travel plan’ could be implemented if needed in some areas of concern. That would likely not take place until at the earliest some time next year.

Resident Billy Eichenbaum, who said he has walked some of the newly signed trails, said one of them “goes right up to vole habitat. You’re inviting disaster, this can’t wait for due process.” Another leads up to the Amargosa River, Eichenbaum said, which is a “Wild and Scenic” protected river, “and the BLM is not there to protect it.”

“We have a road in vole habitat,” said Patrick Donnelly, director of the Center for Biological Diversity. “A protected species trumps your travel plan. ‘We’ll deal with it 10 years from now’ is not acceptable.”

Jack Prichett, of the Old Spanish Trail Association, said the trails could invite encroachment upon fragile areas of the nearly 200-year-old historic mule trail. His organization has been walking, researching and documenting the trail since 2008, he said, “it’s an artifact that can never be recreated.”

Symons said the BLM was willing to meet with the trail association to discuss the issue further.

Other placement issues would be addressed, she said, if concerned parties contacted her or Agent Childers at the Barstow Field Office, 760-252-6000.

After the meeting, some residents did point out immediate placement errors that Childers said he was authorized to correct, such as paddles inadvertently being stationed on private property.

Childers said the BLM hoped to erect kiosks with area off-highway route maps in several locations at some time in the future. For current information on the existing trails and their designations, Symons said the map app by the California Trail Users Coalition, found online, was an accurate resource.

There will be updates to the plan made once the placement of the paddles is complete and “ground-truthing” has been done, Childers said.

At that time the BLM will invite further public comment, probably at a similar meeting in Tecopa. The earliest that might happen, Childers said, is in the beginning of 2020.