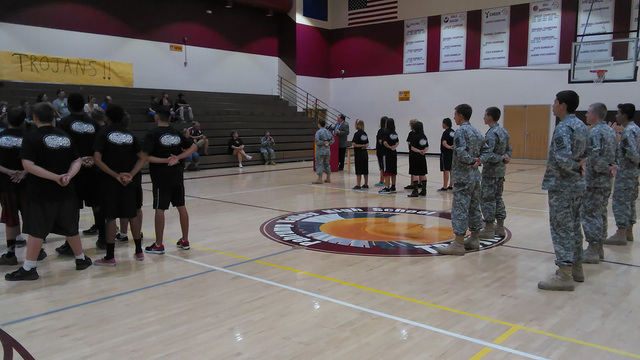 Seventeen teenagers in black shirts and short prepare to graduate on July 21 from the county's Juvenile Probation boot camp, which is designed for teens who have gone through the juvenile court or probation system for various behavioral issues. Selwyn Harris/Pahrump Valley Times

The boot camp is designed for teens who have gone through the juvenile court or probation system for various behavioral issues.

Following Thursdays ceremony, Metscher said not all who enter the seven-week program will complete it.

We had 22 kids who actually started the program, but five of them dropped off, he said. A few of them got out due to medical reasons, while a couple more dropped off because they couldnt handle the physical regimen. At least one of kids had a little bit of an attitude.

The program, in existence for nearly 10 years, came from a similar program in Clark County, the Nevada National Guard Counter Group Task Force.

Metscher said the program was absent in Pahrump last year due to funding problems.

We didnt have it in 2015 because there were some budget issues and we werent sure what was going to happen, but its been going on pretty strong for five of the past six years.

Metscher also said since its inception, the program has helped to turn the lives of many teenagers around, if they see it through to completion.

I think the program is very effective and a great opportunity for the kids to learn something positive combined with structural discipline and participating in teamwork, he said. In order to determine the success rate, we would have to go back and compare rosters and do an arrest check on any new offenses and recidivism.

Throughout the duration, teens are required to attend three days a week, beginning at 7 a.m., with an hour-long physical training regimen, followed by drilling and marching inside the gymnasium.

Once the physical aspect is done, the group then begins classroom assignments.

It can be drug and alcohol prevention or behavior modification, he said. Its all about making good choices and honing their life skills.

Members of Pahrump Valley Highs JROTC program oversee the program, under the leadership of Lt. Col. Patrick Nary.

The JROTC program was a huge help because they use some of their curriculum for that, Metscher said. We sometimes have special guests in the afternoon. We also did a six-week yoga class here and had some detectives from the sheriffs office speak to the kids.

He stressed the importance of staying out of trouble while speaking to the teens.

I dont want to see any of these kids come before me later on and Tom will remind me if they were in this program, Lane said. I will take that into consideration come sentencing time.

Lane said if a teen does appear before him at a court hearing, his concern is mainly about getting them the help they need, if possible.

You see their families in front of you in court, and you see their problems, he said. You just want to help them so badly and figure out a way to get them out of the problems they are encountering. You know they have great potential but its a matter of just getting them to use it and finding those magic words that will hopefully get through to them.

Metscher, meanwhile, said if a parent has a teen who appears to be going down the wrong path in life, they can actually get their kids enrolled in this program, before they get in trouble with the law.

We would rather get them in the program before there is a court-ordered sanction, he said. We try to be very proactive with any kid. We can set up meetings and get resources coordinated ahead of time before they get arrested or wind up in court and that is always a better alternative than possibly getting a juvenile record or some other unfortunate consequence. We are as proactive as possible in that department.

For additional information on the program call Nye County Juvenile Probation at 775 751-7007.