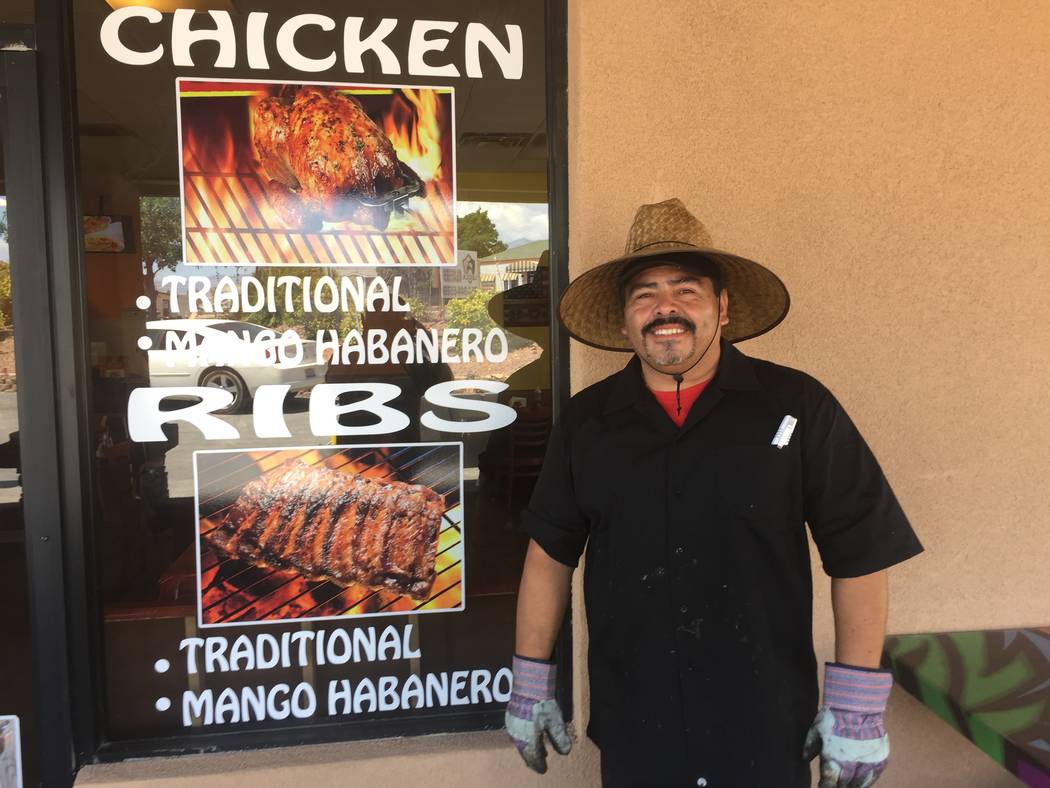 Jeffrey Meehan/Pahrump Valley Times Gonzalo Contreras, owner of the El Pollo Ranchero Mexican grill, stands for a photo on July 29, 2017. The new restaurant, at 1330 S. Highway 160, suite 1, officially opened on Aug. 1, with a soft opening at the end of July. 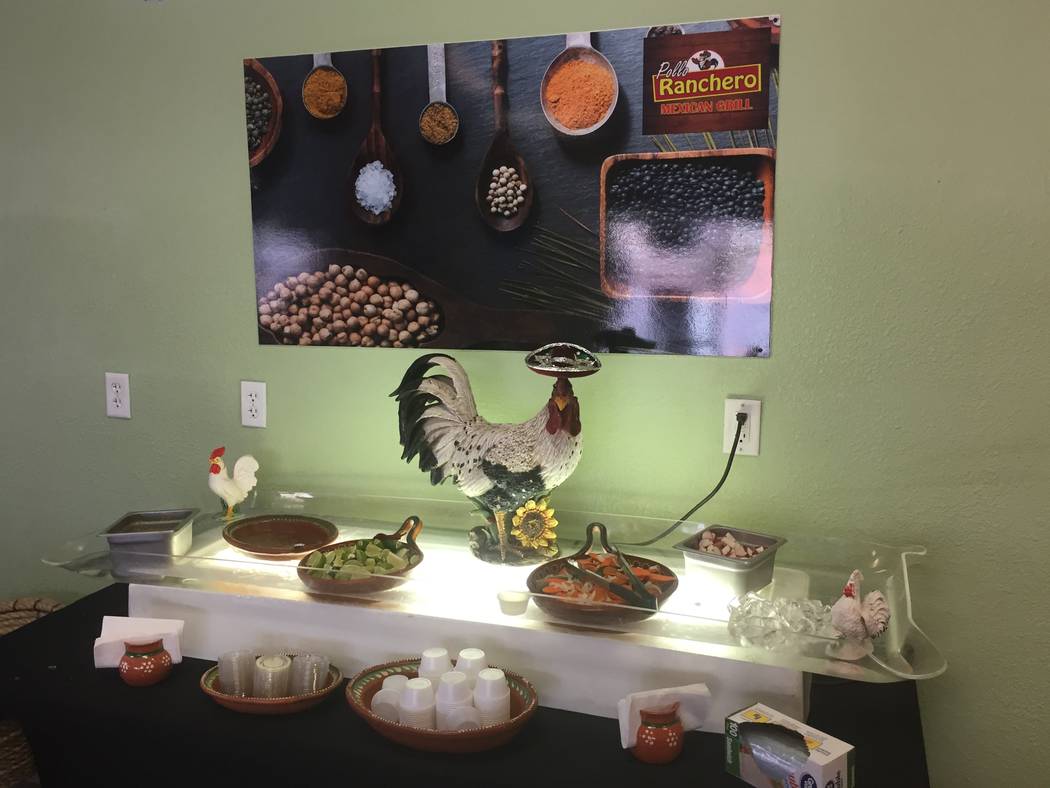 Jeffrey Meehan/Pahrump Valley Times The condiments bar at the newly opened El Pollo Ranchero restaurant at 1330 S. Highway 160, suite 1. The restaurant has a variety of hot sauces, with its mainstay being a traditional Mexican flavoring of mango habanero, for both the grilled chicken and ribs. 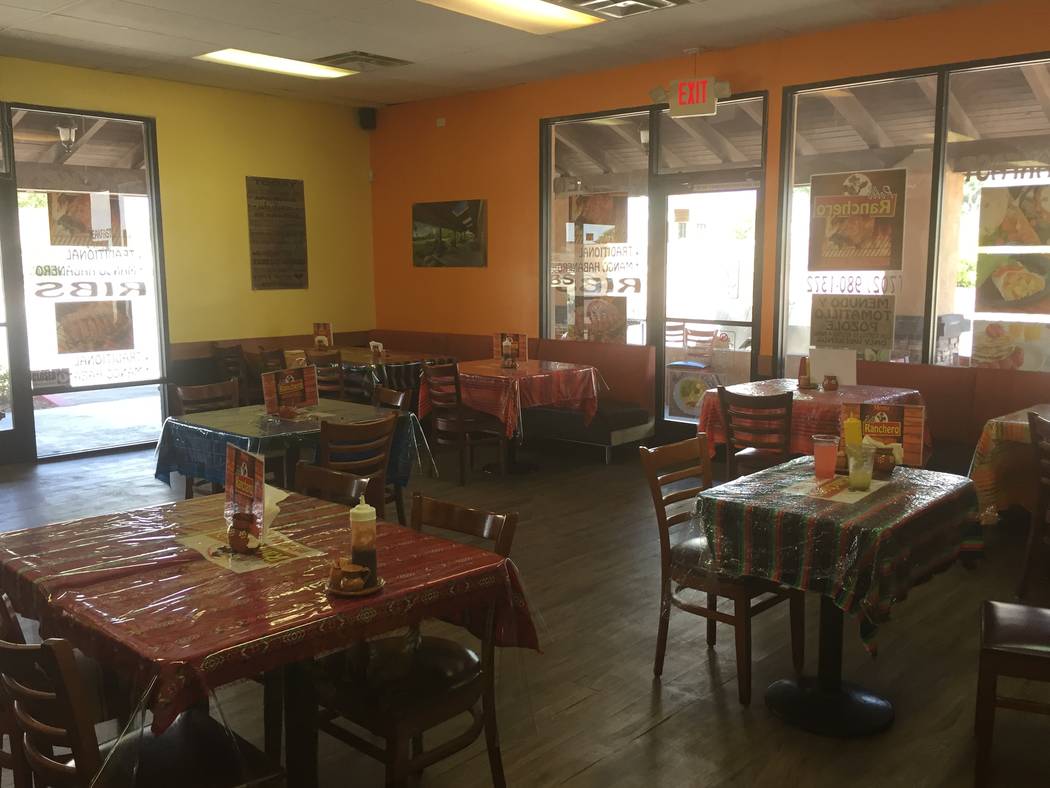 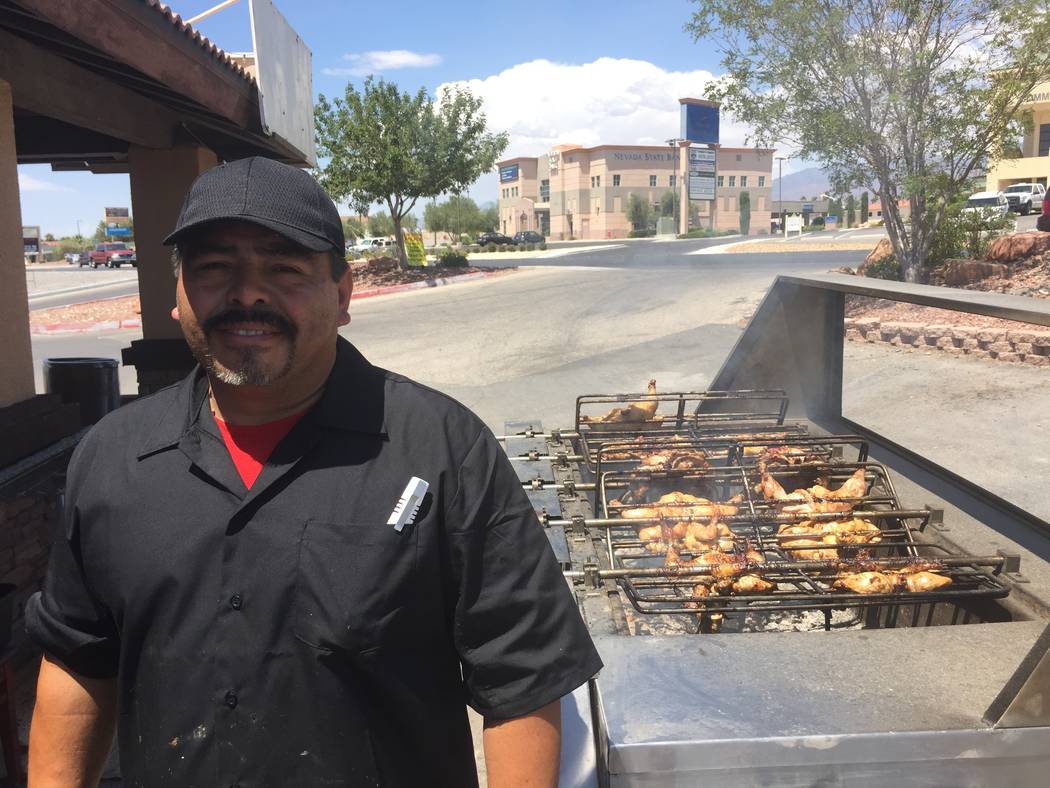 Jeffrey Meehan/Pahrump Valley Times Gonzalo Contreras, owner of the newly opened El Pollo Ranchero, stands in front of his grill filled with ribs and chicken on July 29, 2017. Motorists and people passing by can smell the new barbecue-style cooking along Highway 160.

The owner of a new Mexican grill was expecting to get things set up during a soft opening and prepare for an official opening day in early August.

But opening the doors led to a nonstop flow of customers coming in to check it out.

“We are just constantly going,” said Gonzalo Contreras, owner of El Pollo Ranchero, standing behind several rows of ribs and chicken he was tending to on his grill on July 29.

Motorists and people walking by can probably spot the plumes of smoke as they pass the restaurant that sits along the highway.

The restaurant is setting up a small menu—mostly ribs and chicken—with other items such as pozole and menudo being added over time.

“Pollo Ranchero is going to be about chicken and ribs, and that’s going to be the soul of it,” Contreras said.

Contreras said one of his best sellers is a traditional Mexican mango habanero flavoring—for both the chicken and ribs.

Contreras and his wife came up with the idea, he said.

Initially, he considered doing more of a corner stand.

“I started thinking about it,” Contreras said. “it’s going to be more difficult and more work.”

Some of the challenges that Contreras considered were wind, dust, setting up earlier and the ambiance—all leading up to renting the space that once housed Joshelle’s Teriyaki House.

Other ideas were also were scratched in the beginning stages of the business.

“We originally wanted to serve breakfast, but then we quickly found out that it was just going to be overwhelming,” he said.

This is Contreras’ first business in Pahrump. His family owned a restaurant in the San Francisco Bay area in the late ‘70s, though that later closed when his family moved to Modesto.

When Contreras entered high school, he went back into the business—starting out as a dishwasher at a Sizzler restaurant in Modesto. He moved up the ranks, moving to prep cook and eventually head cook.

He spent the next several years working as a cook for various restaurants such as Red Lobster and Black Angus Steakhouse.

Contreras has lived in several areas in the West, including California, Arizona and Las Vegas, where he moved in 2010. He came to Pahrump about two years ago.

Contreras doesn’t have everything in place yet. He still has a job in Las Vegas — though he is on leave until mid-August.

“I only intend to go back to work for a little while,” he said. “If this looks like it’s shaping up, I’ll give my two-week notice.”

Until then, Contreras is planning to train someone, likely a family member, to help keep the grill running.

“I’m probably going to have a family member do it because they need to know the importance of this,” Contreras said. “If this doesn’t go right, nothing else goes right.”

The restaurant is mostly staffed with family members, except for a couple of people he hired.

The restaurant will be open seven days—from 10 a.m. to 8 p.m., except for Sunday, when the location closes at 3 p.m.