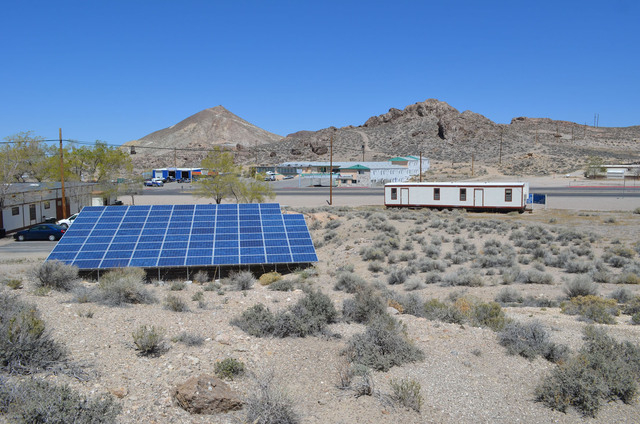 The proposed photo voltaic solar project planned on 745 acres of private land west of Powerline Road in Amargosa Valley could be generating 110 megawatts instead of 65 megawatts as first proposed.

Nye County Commissioners last week scheduled a public hearing for May 6 on an amended ordinance for the increased capacity. The county commission Dec. 3 approved a development agreement with Sunshine Valley Solar LLC, a subsidiary of FirstSolar Development Inc., for the project. The 25-year agreement provides for a one-time $10,000 payment for the Amargosa Valley Clinic during construction and reimbursement of sheriff’s department overtime, if any is required.

Plans have been favorably received by the Amargosa Valley Town Board due to less visual impact from the low-profile photovoltaic system. The PV plant will use a fixed-tilt rotating system and/or a single-axis horizontal tracker system that will be at most 13 feet above the ground.

Nye County Planning Director Bobby Lewis said the additional capacity won’t add to the size of the footprint for the project. The company plans to increase the number of solar panels within the 745 acres, and the panels will transmit more power load, he said. One megawatt is enough to power 600 homes, a 110-megawatt facility would power 66,000 homes.

FirstSolar had proposed to the county a 65-megawatt capacity but revised the capacity upwards to 110 megawatts when they found out the Valley Electric Association transmission line could carry a greater load, he said. Power would be transmitted with a new, half-mile, transmission line to the VEA substation at Anvil and Powerline Roads.

“They’re just matching up what the existing transmission line could load or carry from that plant,” Lewis said.

FirstSolar spokesman Melanie Falls said since they started permitting the project in September, they started doing some economic analysis and found they could increase the power output.

The company bumped up the groundbreaking from the first quarter of 2016 to the last quarter of 2015, because it will take longer to build with the increased capacity, Falls said. The county development agreement called for an average number of 310 construction jobs, she said.Once operational it will require five employees.

FirstSolar talked earlier about the lack of bureaucratic hurdles building a project on private property. A larger plant would require a Utility Environmental Protection Act permit.

“It’s a routine environmental permit. We don’t anticipate any issues. We already did our cultural and biological surveys. We actually received a technical letter from U.S. Fish and Wildlife that indicated tortoise impacts would be minimal. We do not have to get a permit,” she said.

FirstSolar is the largest photovoltaic manufacturer in the world and projects installed generating seven gigawatts of power capacity. In Nevada, FirstSolar built the 50-megawatt Silver State North project and has plans for Silver State South with 250 megawatts, near Primm. They also built Copper Mountain, a 48-megawatt project near Eldorado Valley and Copper Mountain II is under construction, which will generate 150 megawatts.

In a related matter, county commissioners last week approved the abandonment of Smith Lane for one mile west of Powerline Road. A 20-foot wide VEA utility easement and a 40-foot wide At&T easement was preserved. Property owners asked for the road abandonment to reduce existing traffic and limit potential interference with the solar project, according to a report by Nye County Planning Technician Kelly Harris.

“I want to make sure it’s understood by the commission that that is a controlled access area and that just because an easement exists that won’t put us right back where we are now, the public can go there and endanger the project,” property owner, attorney Michael DeLee said.