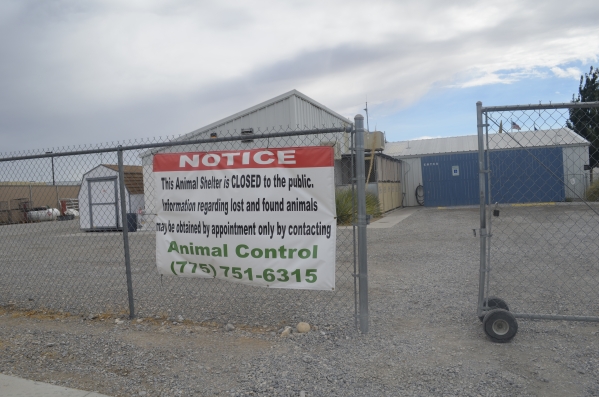 The Nye County Animal Shelter has two months left to come up with short-term funds before the county cash dries up, officials said last week.

Members of the Nye County Animal Advisory Committee last week decided to look into towns sharing the cost of animals and reviewing Title 6 of Nye County code to convert some infractions from citations and impoundment to civil penalties and fines as short-term solutions. The possibility of countywide sales tax and parcel assessment fees as long-term solutions to remedy the situation were the two solutions discussed.

“We are looking at everything and we have an idea I believe of where we want to go long term and we have a couple of different options that we will put forward to the commissioners,” Animal Advisory Board Chairman Scott Shoemaker said.

Commissioner Frank Carbone said the number for the next two months is $7,588 for September and October to man the shelter that has been closed to the public for the last several months but is still receiving animals that animal control officers are bringing in.

“If in fact, we don’t have any more funds to support after that $7,000 is gone, (the shelter) closes completely,” he said.

“I have to tell you, you don’t have two months left of money, actually, it’s almost less than two months now,” Commissioner Frank Carbone said. “I have no place else, we have scavenged as much money as we can from every little hole.”

Nye County Animal Shelter is one of the entities that were affected by the county’s dim financial situation. Among other items are animal control, museums in Pahrump and Tonopah, emergency services, administration and veterans’ services. If eliminated, the items could save the county over $1.5 million.

“I think if they raise the sales tax, they need to raise it to kind of get out of the whole budget thing and not just the animal shelter,” Nye County Emergency Management Director Vance Payne said. “We are all animal people here, but there’s a whole lot of other people that need help too that are given cutback because of the budgetary concerns. The seniors, the veterans, the museum — everything is getting cut back.”

While an estimated cost of running a shelter is approximately $285,000, the shelter is currently missing out on $60,000 to 70,000 in adoption fees. Members of Nye County Animal Advisory Committee also proposed reviving adoption fees and getting money from licenses.

By amending the Title 6 of Nye County code, officials said they hope to streamline the money straight to the shelter.

“Everything under Title 6 is a misdemeanor, that’s written in the first line,” Christian Sanders said. “If we could loosen that to where it’s tickets instead of citations.”

To get two of the long-term solutions on the ballot, the Nye County Animal Advisory Committee has to make a recommendation to the Nye County Commission.

“If we don’t have a solid at least five-year financial plan to put in a jacket as soon as we turn the key, I just assume seeing this whole thing die, because all you are doing is throwing good money on bad,” Payne said. “We have to have a sustainable community plan.”