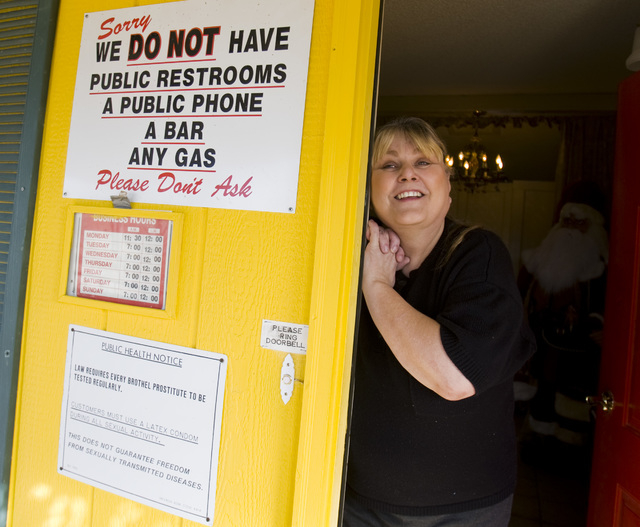 BEATTY — Shady Lady Ranch brothel owner Bobbi Davis announced she will be the latest brothel owner to close down on Highway 95. Her establishment closes at midnight Dec. 14.

In 2004, Esmeralda County’s only brothel, the Cottontail Ranch closed.

Davis said she is turning 61 and wants to move back to her native Texas to care for her ailing parents.

“I have one girl, she’s going to work with me until the end and then she’s gone,” Davis said. “I opened in 1992. My husband and I put it together. He passed away two years ago. My heart just wasn’t in it.”

“The state needs to start treating us like casinos,” Davis said.

“When I came here I thought, ‘wow a state that really allows you to do this,’” she said. “But it’s not the same. They treat you like the worst stepchild.”

Davis said she has a couple of people interested in the property but it’s difficult under Nye County brothel regulation to reopen a brothel.

Davis said she became disillusioned when former brothel owner Joe Richards was able to keep his brothel license. Richards was fined $50,000 and his license put on probationary status in October 2010 by the Nye County Licensing and Liquor Board following his guilty plea in federal court in March 2009 to one count of wire fraud and honest services fraud. He was wiretapped offering a $5,000 bribe to former Nye County Commissioner Candice Trummell.

“They gave him his license and he had two prior convictions,” Davis said. “It’s kind of like the old good ole’ boy system still exists.”

Davis was part of a lawsuit with the American Civil Liberties Union asking to repeal a prohibition on brothel advertising. U.S. District Judge James Mahan ruled the state statute prohibiting brothel advertising was overly broad and unconstitutional, but the 9th Circuit Court of Appeals in March 2010 reversed the lower court ruling and upheld the ban.

In January 2010, Davis attracted widespread publicity to the Shady Lady Ranch when she began offering male prostitutes, who worked in a “rooster cottage” in the back of the regular brothel. Media outlets ranging from the Los Angeles Times to ABC News to the Huffington Post wrote about it. The New York Post sent a reporter who wrote a story about her night with a “prostidude.” But that experiment was short-lived.

When gas prices rose above $4 per gallon in 2008, she gave out $50 gas cards to patrons who spent $300 at her brothel as an incentive to get patrons from Las Vegas.

Like other brothel owners, Davis complained about the state and local authorities not cracking down on the proliferation of illegal prostitution in Las Vegas. The prostitutes arrested there get off with a slap on the hand, she said.

“There’s all these illegal things going on and they keep letting these massage parlors going on. Every once in a while they’ll bust a few. When I first came here if a girl got picked up for prostitution in Vegas they’d tell her for six months you can’t work,” she said. “Now it’s sad to say they don’t get anything, it’s like a revolving door.”

“If any business stagnates it dies,” she said, adding the nearby community of Beatty is also dying.

Davis said she’d sell it to Dennis Hof, who owns the famous Moonlite Bunny Ranch near Carson City if he was interested, though she said Nye County may have concerns he was developing a monopoly. Hof bought Richards’ two brothels in Nye County: the Cherry Patch 1 in Crystal and the Cherry Patch 2 in Lathrop Wells, which he renamed Dennis Hof’s Love Ranch South and the Alien Cathouse respectively.

The rural brothels are struggling, Davis said, with the possible exception of Elko, where there’s a mining boom.

With the closure of the Shady Lady Ranch, the next brothel going north on Highway 95 after the Alien Cathouse in Lathrop Wells is the Wildcat Ranch in Mina, in Mineral County.

George Flint, with the Nevada Brothel Association, said the recession has hit brothels hard, and illegal prostitution where johns can buy hookers for half the price, but without the security of knowing it’s legal and disease-free.

Where Winnemucca used to have five brothels, now there’s only one, he said, adding a brothel in Lovelock is closed.