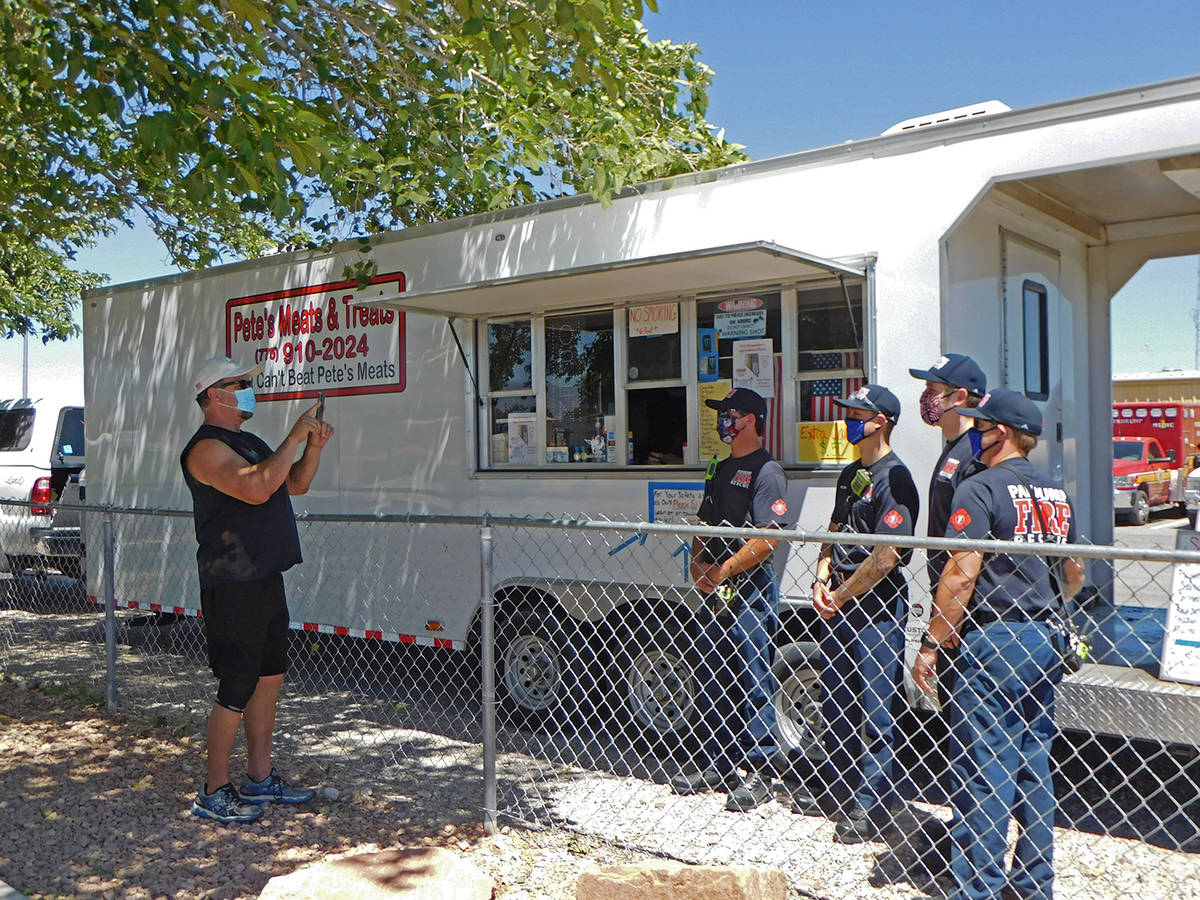 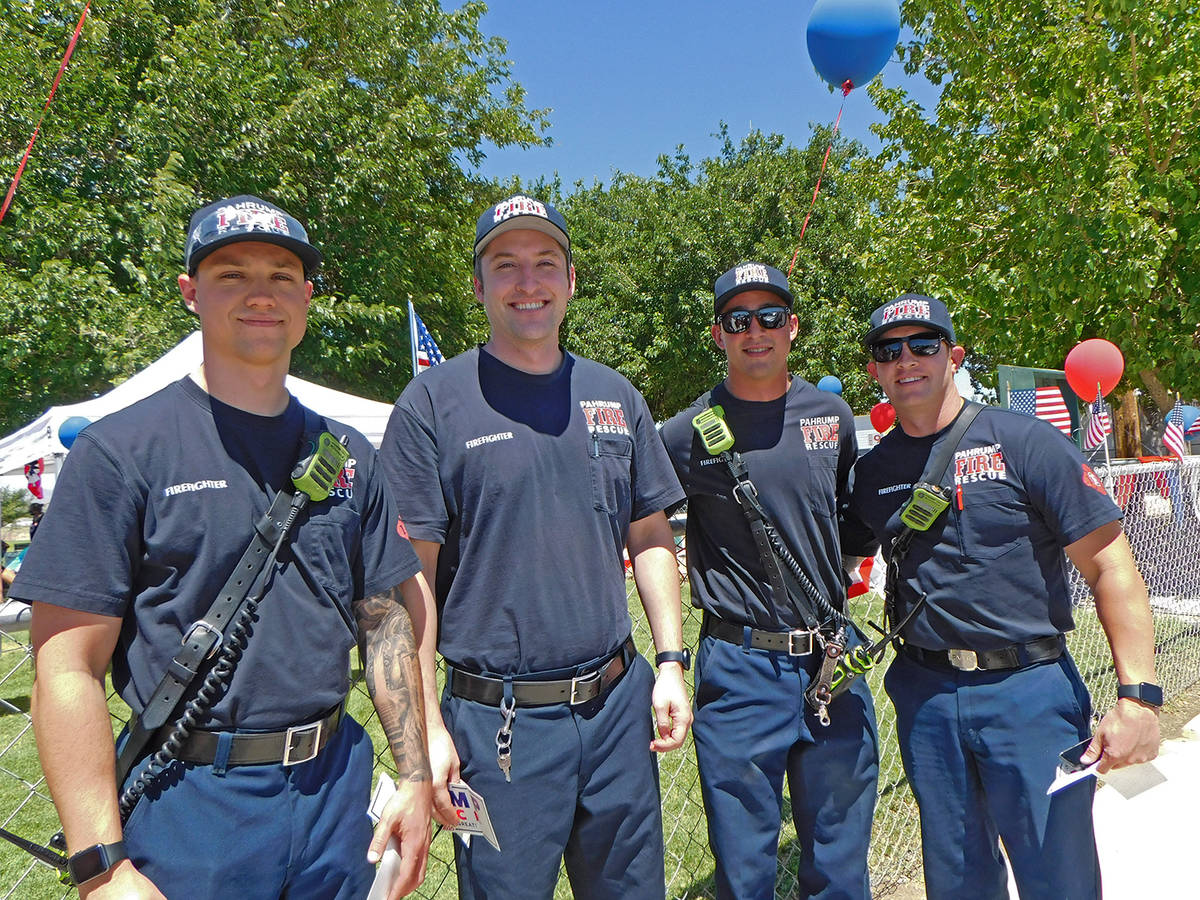 Robin Hebrock/Pahrump Valley Times First Responders were given a warm welcome at the picnic held in their honor and were in high demand for photo opportunities. 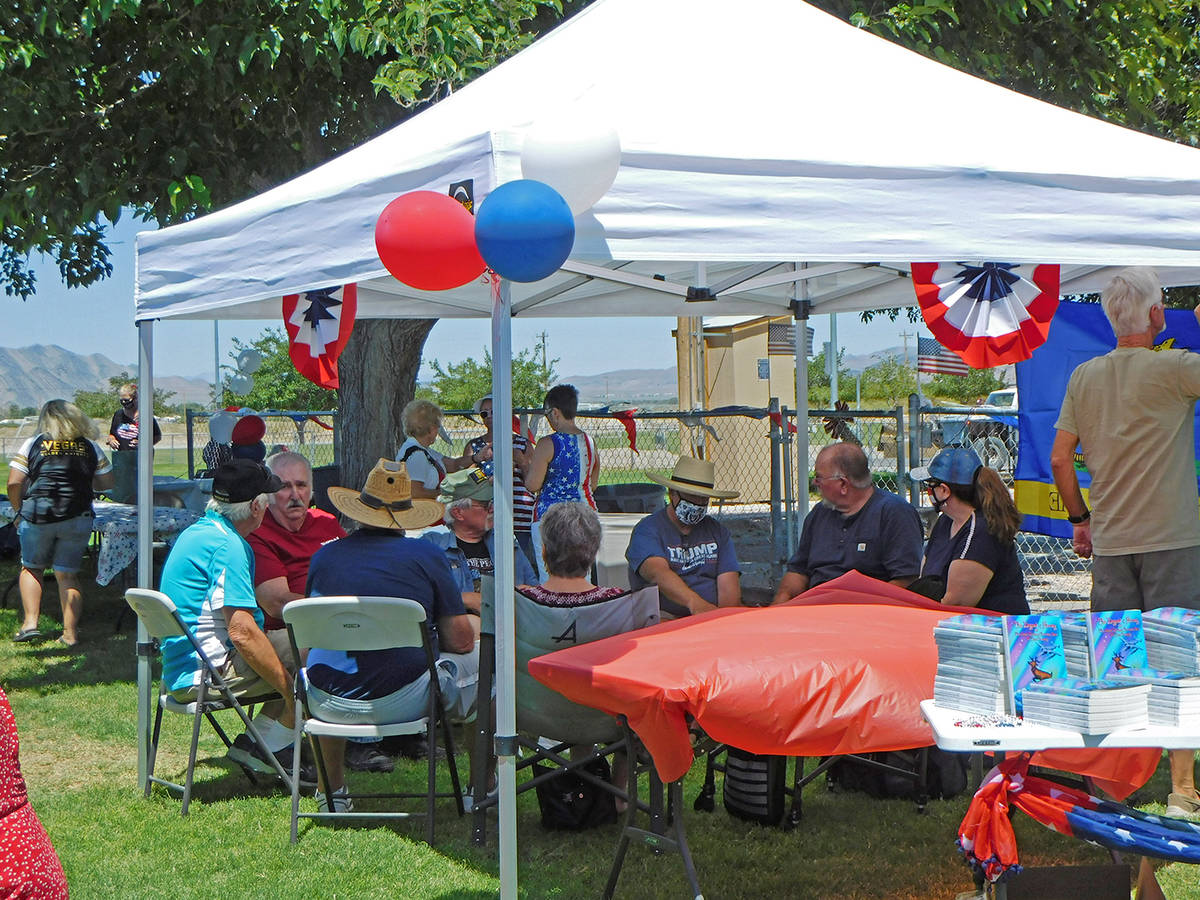 Robin Hebrock/Pahrump Valley Times The shady, grassy area just behind the Pahrump Community Pool was transformed into a patriotic and festive scene where residents gathered to celebrate and honor the town and county's first responders. 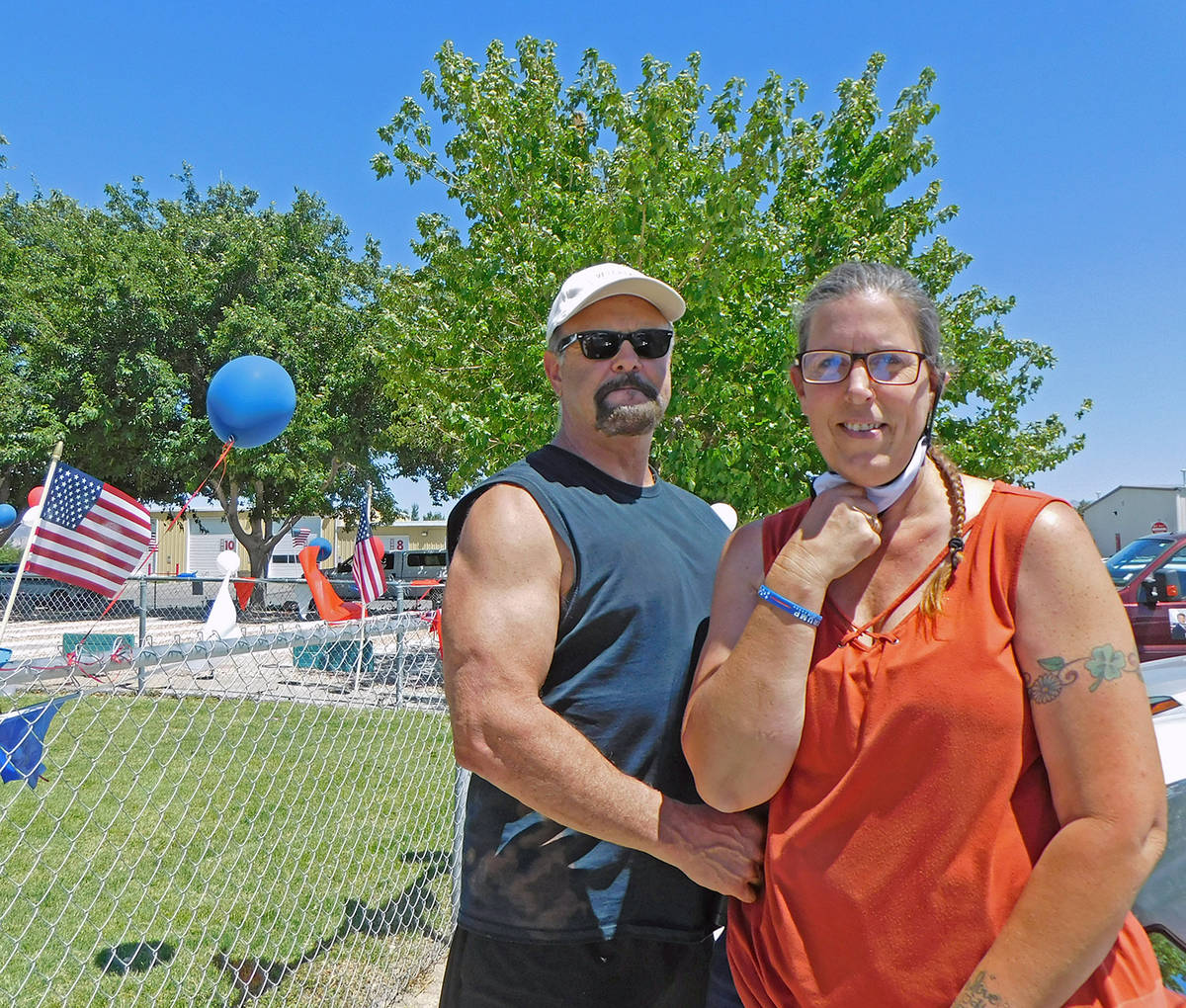 Robin Hebrock/Pahrump Valley Times David and Stacie Hiebert came up with the idea of hosting a First Responders Appreciation Picnic and the community responded with enthusiasm, offering their time as well as financial donations to help make the event a big success. 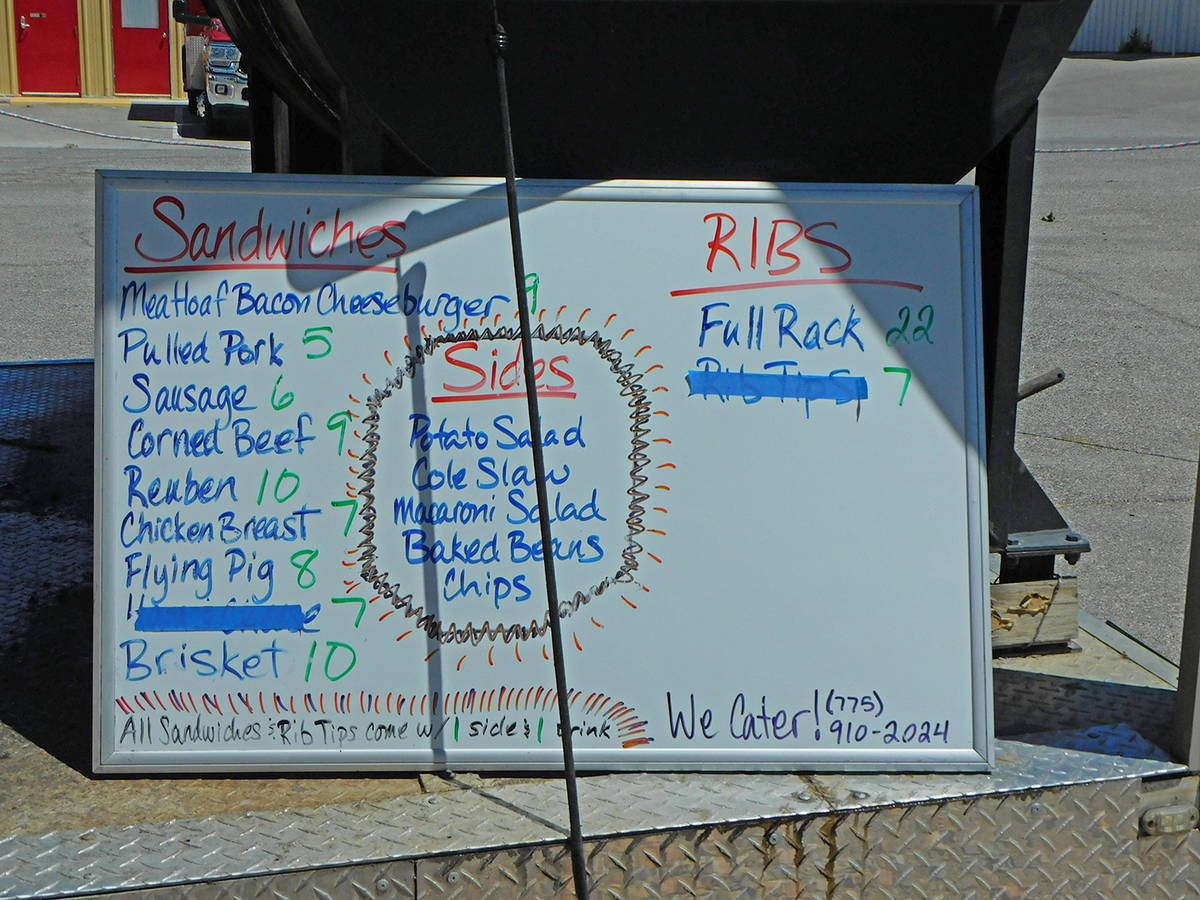 Robin Hebrock/Pahrump Valley Times Pete's Meats and Treats had a special menu ready for the First Responders Appreciation Picnic, where deputies, fire fighters, paramedics and other first responders were able to chow down for free. 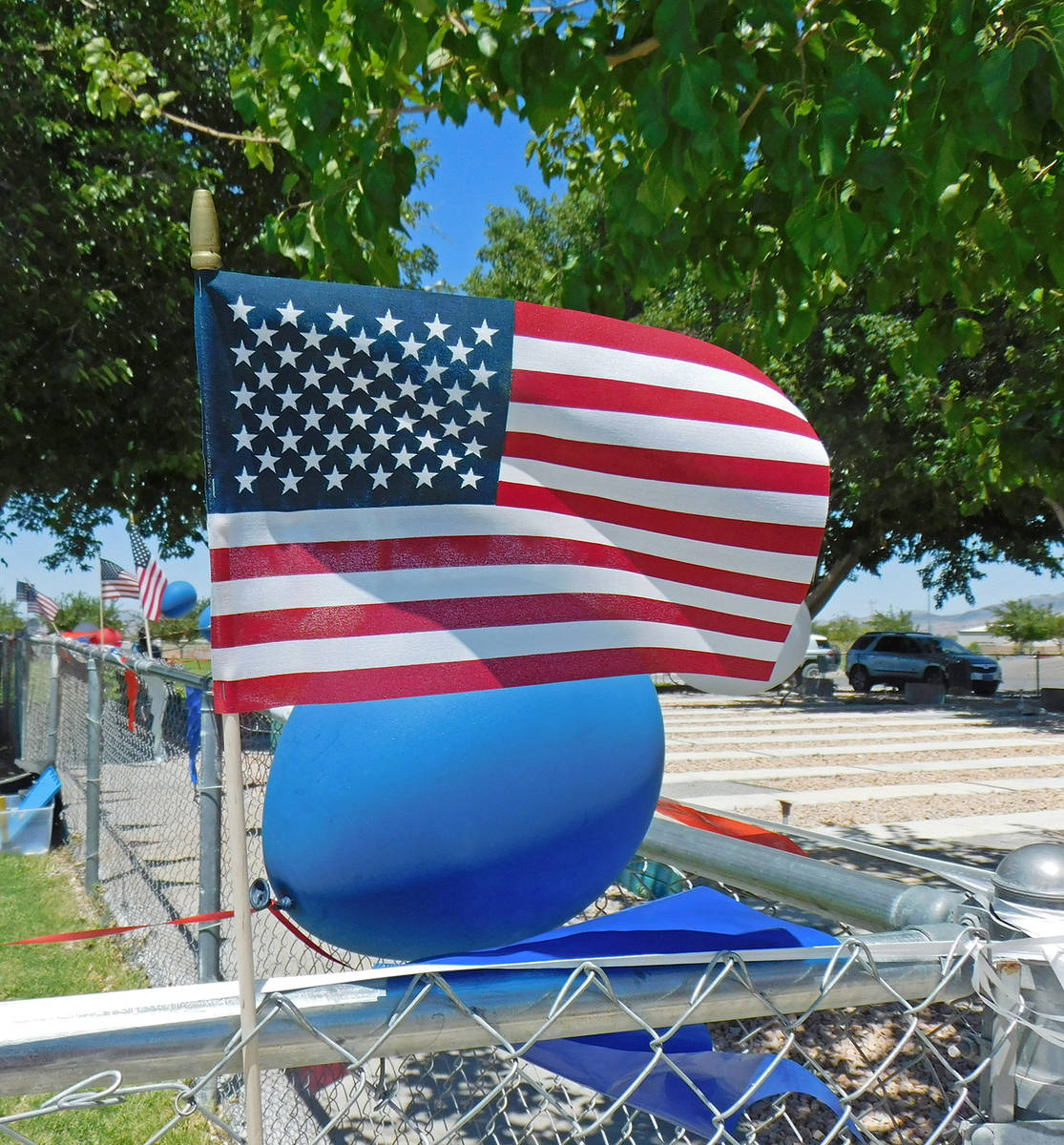 Robin Hebrock/Pahrump Valley Times The venue of the First Responders Appreciation Picnic was festooned with American flags and balloons. 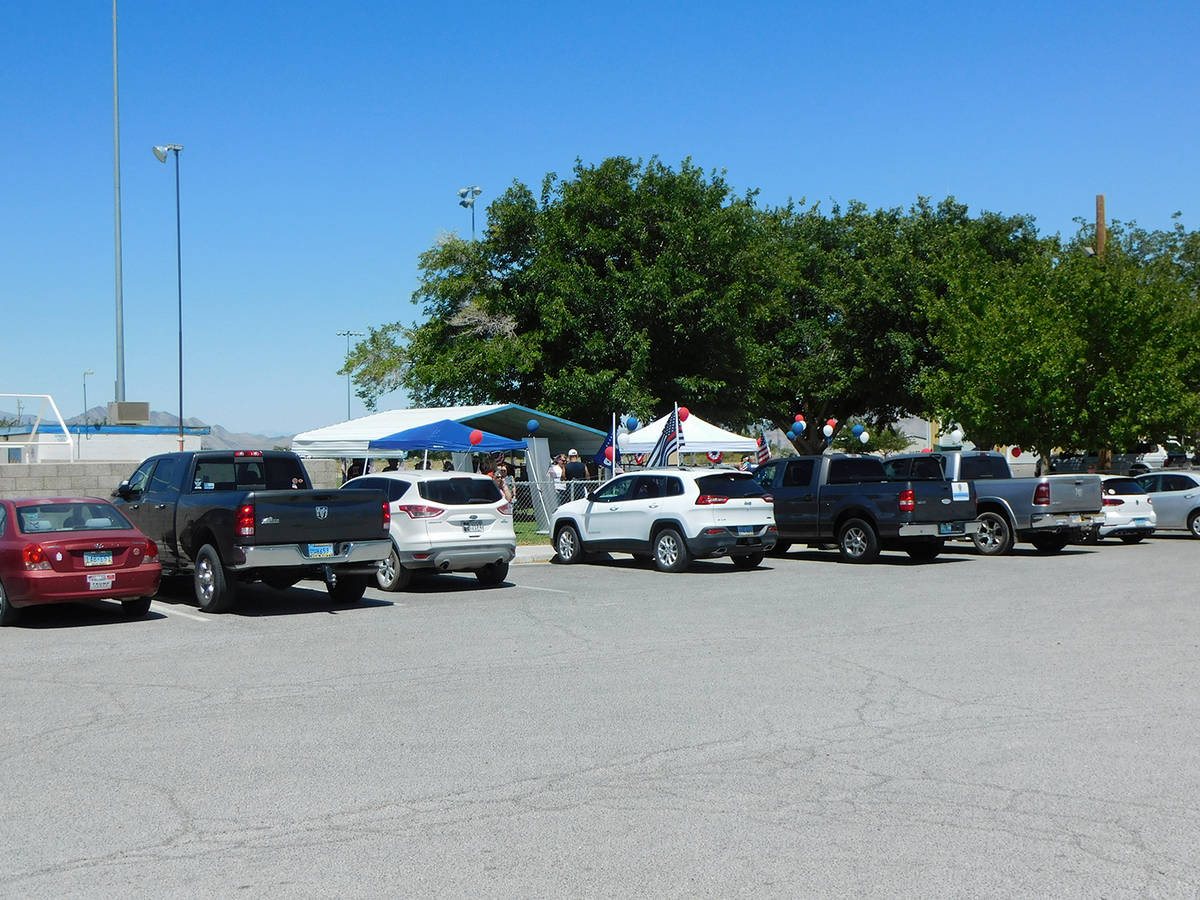 Robin Hebrock/Pahrump Valley Times A sight that is quite rare in the days of COVID-19, the parking lot at Petrack Park was filled with vehicles as residents and first responders turned out for the First Responders Appreciation Picnic.

With red, white and blue decorations gracing tables, American flags and banners lining the fence and snapping in the breeze, balloons floating in the air and big smiles at the ready, area residents came together last week to honor the men and women who take on the duties of first responders for not just Pahrump but the entire county of Nye.

The inspiration of local residents David and Stacie Hiebert, the First Responders Appreciation Picnic took place just before the Independence Day holiday on Friday, July 3 at Petrack Park and Pete’s Meats and Treats was on hand to provide a hot, delicious barbecue feast, all free of charge to first responders.

The event was an effort to show first responders of all kinds, from law enforcement to fire crews to dispatchers, that despite the anger and malice shown by many in the public lately, here in Pahrump residents are extremely grateful for the hard and oftentimes dangerous work first responders do in their mission of keeping the towns they serve safe and secure.

“The park filled up quickly on Friday morning,” Stacie told the Pahrump Valley Times following the picnic, noting that she was pleasantly surprised with the fact that so many people were willing to show up early and put in their time and effort, making the scene a patriotic and festive one and providing a welcoming crew for when the first responders began to arrive. With that strong turnout, however, came the need to ensure proper distancing and other measures required by the COVID-19 pandemic and Stacie said the volunteers strove to follow those requirements, too.

“Volunteers came early and helped set up decorations while maintaining the health and safety guidelines in order to keep everyone safe and healthy,” Stacie detailed. “The community came together to show their appreciation to our firefighters, paramedics, search and rescue, sheriff’s office, detention officers and dispatchers. There was a great flow of community members and first responders over the course of the three-hour event.”

She estimated total attendance throughout the picnic to be roughly 150 community members and 75-80 first responders. Attendees came and went from the picnic area set up just behind the Pahrump Community Pool, in the shade of the mature trees. Stacie added that the event did not exceed the governor’s health and safety guidelines, as it was imperative to ensure the safety of the first responders as well as other citizens out for the event.

“The community of Pahrump really stepped up to show their love and appreciation for our first responders!” Stacie enthused.

Though the Hieberts were the ones who originally decided to hold a picnic to recognize and honor the first responders, once the community got wind of the event, many others offered their support in both time and financial donations.

Stacie reported that she and David started out with the intention of funding the free meals themselves but the idea caught on quickly and many stepped up to donate funding, so much so that after all expenses have been paid, there will be money left over. The remaining funds will not be left without a purpose, however, and will now be donated to Southern Nye County Search and Rescue, a volunteer arm of the Nye County Sheriff’s Office that relies heavily on donations to continue its operations.

“When David and I planned the event we were not looking for donations, we just wanted to do something to show that we know their struggles and no matter what they may see in the media, the community supports them and appreciates the job they do,” Stacie detailed. “However when the Pahrump Valley Times ran the First Responders Picnic article, the word spread through the community and our phone was continuously ringing with members of the community wanting to know how they could help.”

Stacie said about $3,500 was raised and once all of the costs have been covered, she and David will be very proud and delighted to present the rest of it to the search and rescue crew.

Of course, there are many people who helped make the event possible and Stacie took the time to make sure everyone knew how grateful she was for the support and assistance.

“First, I’d like to thank my husband David for the great idea, which I ran with. A huge thank you to Pete’s Meats and Treats for coming out and professionally catering the event, feeding not only the first responders but the community as well,” Stacie stated. “Thank you to our community, who stepped up and either donated money or their time to make this a great success.

“Our biggest thank you is to our first responders!” Stacie continued. “Thank you to Sheriff Sharon Wehrly and Fire Chief Scott Lewis for helping spread the word throughout their departments and letting their staff members come out and enjoy lunch with the grateful community. I wanted to also thank Sergeant Augustine for coming back and picking up 20 meals for the first responders who were in positions that required them to stay at their post, such as the detention officers and dispatchers.”

Stacie also offered a shout-out of thanks to Nye County Commissioner Leo Blundo and Frank Carbone, who will join the county commission once again in 2021, for their assistance in securing the park for the event after she and David encountered numerous roadblocks when trying to do so on their own.

In conclusion, Stacie left the first responders with a special message, telling them, “We want to thank our first responders, we hope they know how much we as a community appreciate and support them. The job they do is not an easy one and they need to know how much they are appreciated. We need to let them know often that they are appreciated, not just when something bad happens and they are all thrown in the same pot. Most people only think of them when they hear the sirens or they themselves need to call for help and that needs to change. These men and women go to bat for us every day and it’s about time we go to bat for them. David and I will be doing these types of events often to show our continued support for our first responders.”