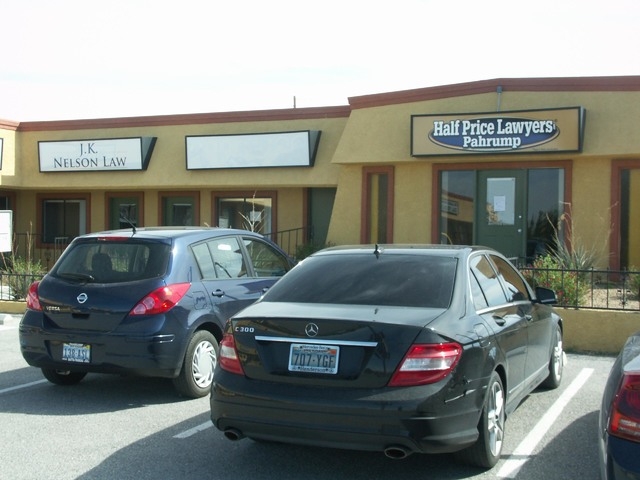 An area law firm that closed its doors and ceased operations late last month has left many clients scratching their heads in disbelief.

Half Price Lawyers at 41 N. Highway 160 opened last May with much fanfare. Local attorney Jonathan Nelson provided legal counsel for the firm.

He said he and other office staff had a feeling something was not right and recently saw the handwriting on the wall less than a year after the firm began taking clients.

“We were doing pretty well at the beginning but the financial issues were in the Las Vegas office,” he said. “The next thing I knew in late February of this year, Glen Truitt informed the staff in Las Vegas that they were going to be shutting the doors and we all found out the following day.”

Nelson was referring to Glen Truitt, who started the first Half Price Lawyers office in Las Vegas more than six years ago.

Pahrump was the second southern Nevada location. The firm handles everything from personal injury cases and bankruptcy, to criminal and family issues.

“Glen had acquired a firm that had the license for Half Price Lawyers about a year and a half ago,” he said. “He and I connected last spring and we opened the doors here in late May and we were doing pretty well.”

The Pahrump office according to Nelson, had more than 100 client-active cases before the firm closed.

Nelson said he wants to assure all of the clients who retained services, will not be left out in the cold.

“Because I felt that there may be something up, I was able to move quickly and open an office next door,” he said. “At this point in time, my biggest concern is making sure all of the clients that I retained under the Half Price Lawyer name in Pahrump are taken care of. I have been making some appearances and wrapping things up because the last thing I want is my community and business partners to be left out in the cold.”

Along with Nelson in his new office a 41 N. Highway 160, are individuals who are familiar with the cases Half Price Lawyers were overseeing.

“It was really important to me, not to miss a beat,” he said. “I brought the paralegal from Half Price Lawyers to my office and we both have a good understanding of all the caseloads. Our goal right now is to finish them up without missing a beat.”

Nelson said Las Vegas employees of the legal firm were not aware the office was closing, while noting that Truitt was experiencing financial problems leading up to the closure.

Truitt also has another law firm, Truitt and Associates, which did not file for bankruptcy.

“It’s now public record, but Glen did file for personal bankruptcy about two weeks ago,” he said. “He’s a great business guy, but he just made a bad deal when he bought the Half Price Lawyers firm. I wish him the best and he’s been working with me, but again, my commitment is to Pahrump and that’s why I opened up shop right next door.”

He’s sent out letters to all of the Half Price Lawyers clients informing them about the change.

He said their first question is always the same.

“Are you going to going to appear for my case?” he said. “The answer has repeatedly been ‘yes’ and we are going to take good care of them. Since the Half Price office closed, the worst thing that has occurred, was about a week-long gap where the phone lines were down. I don’t want anyone out there who retained services to be overlooked.”

Truitt could not be reached for comment by press time on Tuesday.

On the Half Price Lawyers website, a message was posted concerning the split.

“HPL has ended the agreement with Attorney Glenn Truitt,” the message stated. “This means he is no longer authorized to call his law firm “Half Price Lawyers” and is not allowed to use the HPL assets any further.”

An additional message regarding the future of Half Price Lawyers was also posted.

“As soon is reasonably practicable to do so, the owners of Half Price Lawyers, LLC, the intellectual property licensors of the Half Price Lawyers trademark and associated assets, will seek to re-license the assets to a new local law firm,” the message read. “We seek inquiries from licensed Nevada attorneys and law firms who share our vision of creating quality access to the legal system at affordable prices for everyone. Interested attorneys should inquire by email to licensing@halfpricelawyers.com.”