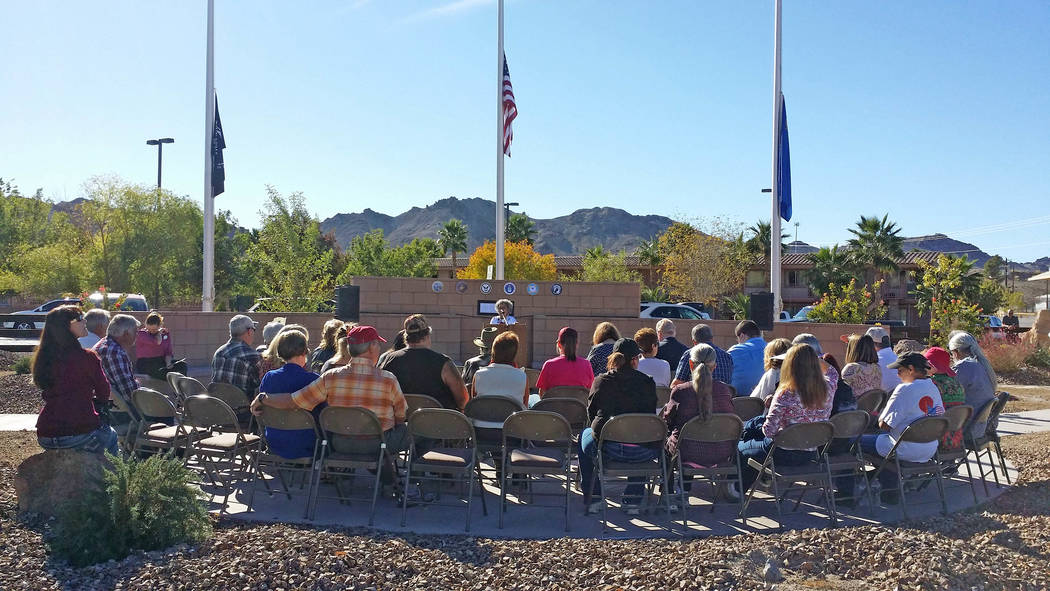 The crowd listens to remarks from Beatty Town Advisory Board member Erika Gerling at the dedication of the Robert A. and Florence Revert Park in Beatty. Carrie Radomski / Special to the Pahrump Valley Times 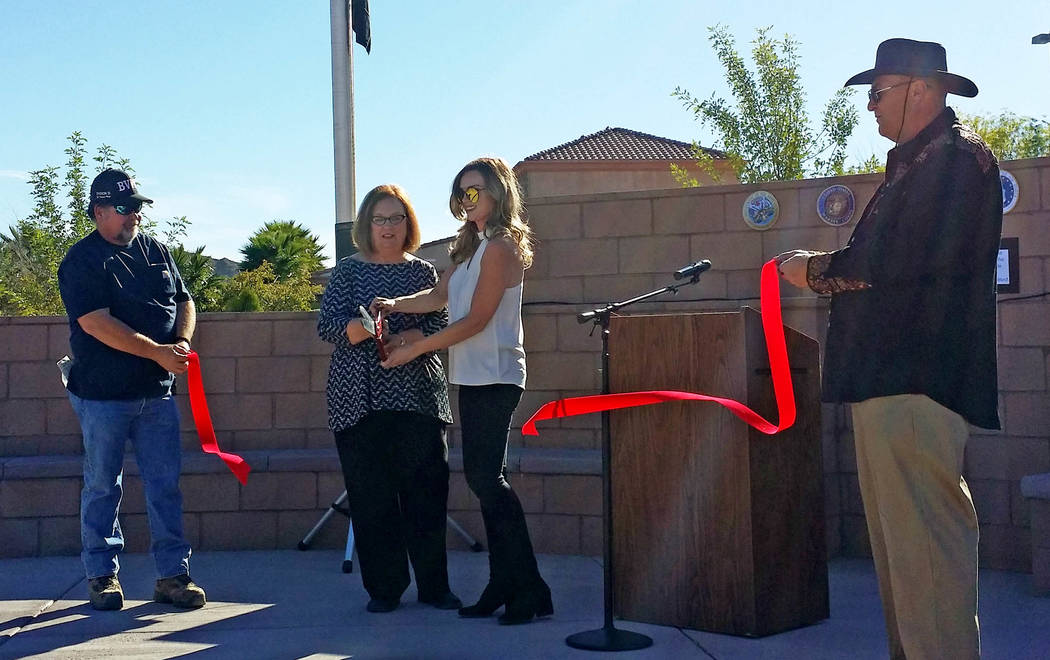 Elaine Richardson cuts the ribbon at the dedication of the Robert A. and Florence Revert Park in Beatty. The ends of the ribbon are being held by Beatty Town Advisory Board members Kelly Carroll (left) and Randy Reed (right). Carrie Radomski / Special to the Pahrump Valley Times

BEATTY—The dedication of the Robert A. and Florence Revert Park in Beatty marked the culmination of many years of dreaming, planning, and construction.

On Veterans Day, approximately 100 people gathered at the park, sometimes referred to as the Beatty Town Square, for the event.

The idea of creating the park sprang from the desire of Beatty residents to have something to replace the town Christmas tree, which was cut down back in 1985. From this developed the idea of having not just a Christmas tree, but something that would also be an attractive welcoming spot for visitors to Beatty.

Planning on the park began in 2005, and landscape architectural designs were commissioned. The land was acquired in 2009.

Revert family member Elaine Richardson and her husband Brad donated a portion of the land, and the rest was purchased by the town. Utilities were installed and the Christmas tree, the town clock, and a donation plaque were installed. Much work remained to be done.

The Beatty Town Advisory Board held numerous meetings gathering community input on the design. A Nevada State Parks grant was eventually secured to help with the cost.

One of the features of the new park is a veterans’ memorial wall. The plaque on the wall reads, “This Beatty memorial wall is dedicated to all veterans, past, present and future, who have and will give the ultimate sacrifice while serving our country. For this, the town of Beatty and its citizens are forever indebted.”

A kiosk in the park features photos and the following short biographical sketch of Robert A. and Florence Revert:

“Bob (Robert) Revert, a member of one of Nevada’s oldest families, was a World War II veteran, a Nye County deputy sheriff (later captain at the Nevada Test Site), businessman, politician, and mining buff. He served in the Nevada State Assembly from 1952-1963, and as speaker pro temp during his last session.

“He was chairman of Roads and Transportation and instrumental in getting the road paved between Pahrump and Las Vegas, as well as protecting the Big Dunes in Amargosa. He worked to allow small counties to get more money from gambling revenues and brought the actual exchange to Beatty to allow private homes to have phones.

“He later joined with Judge William P. Beko in an effort to get tax money paid by contractors at the Test Site to go to Nye County for new schools to be built. Always interested in mining, he sold his claims to Bond Gold, which brought a modern-day mining boom to Beatty.”

“Marrying the former Florence Perchetti, of Tonopah, at the end of World War II, together they were lifelong advocates for the town of Beatty. Florence started the first Brownie Scout program in Beatty as well as serving as a member of the Beatty Improvement Board. She was active in Eastern Star. She would join or help any organization that would benefit the people of Beatty. The two were known to go out of their way for friends and strangers alike, often paying others’ hospital bills or doctor visits. They would allow travelers a room to stay in their own home if motels were full and it was late at night. They donated to all causes. Never did they expect any payment or thanks for what they had done.”