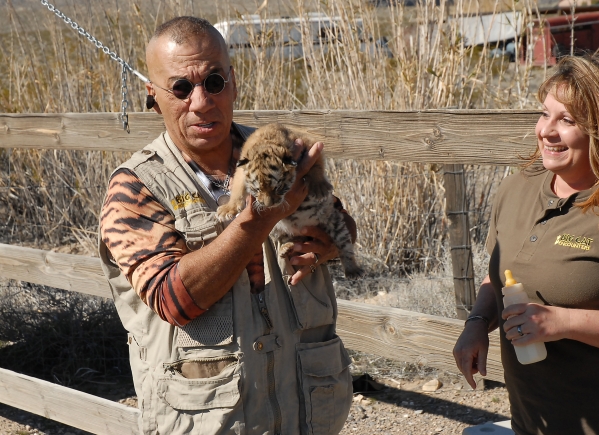 A big cat owner has been given until Sept. 10 to remove the animals or face jail time.

The nearly five-year dispute between Nye County and Karl Mitchell, owner and operator of Big Cat Encounters Ranch, reached a new landmark Tuesday during a hearing before Fifth District Court Judge Kim Wanker to determine whether Mitchell can legally keep his 10 tigers on the property belonging to longtime Pahrump resident Ray “The Flagman” Mielzynski.

Wanker ruled in favor of the county and ordered Mitchell to remove the animals, per county ordinance.

If the tigers are not removed by the time both men return to court in September, they face contempt of court charges, punishable by up to 25 days in jail and a fine.

Mitchell did not mince words when talking about the decision.

“I’m not disappointed, I expected it,” said Mitchell, who added the judge just followed what the county wanted her to do. “She’s afraid of controversy. She claims to read everything, but if she read everything, she wouldn’t have made the decision that she made.”

Mitchell, who is black, also said he knows why he’s being targeted by county officials regarding his tigers.

“Racial hatred and animus is behind all of this,” he said. “I’ve been trying to be a good man, but I’m continually picked at and probed. People need to understand that there are four other facilities in town that are not required to have conditional use permits. There’s one facility one mile from here and they have cats but they are not required to have a conditional use permit.”

Mitchell noted that the acreage his tigers call home, at present, will not see development anytime soon.

“These lots that surround our 20-acre parcel are unbuildable, and will never see any development until a developer puts a half million dollars’ worth of infrastructure to bring water out,” he said. “Nobody’s going to buy a $3,000 lot and spend a half million dollars to get water to it. The fact that it’s unbuildable means that it should be taken out of the planning district and nothing’s going to happen here. There’s been no action here since the 1970’s.”

There appears to be at least two opportunities for Mitchell’s tigers to remain on the property before they’re scheduled to return to court.

Mielzynski said the county commissioners could ease some of the zoning restrictions for the land.

Mielzynski also he believes the judge was in error when she issued the ruling.

He supported his statement by suggesting that local laws and ordinances should not supersede federal laws.

“They are saying that local ordinances somehow trump federal law and it was actually brought out that maybe this should be discussed in federal court,” he said.

Mitchell noted that he’ll sit down and talk with county officials to somehow reach an agreement that would result in a favorable compromise for both parties.

If both sides do not reach an amicable arrangement, Mitchell said he will remain defiant, for the safety of his tigers.

He noted animals suffer unnecessary stress when tranquilized and moved from familiar surroundings.

“I’m not moving them,” he said. “That’s pretty much it. I’m not going to tranquilize my tigers and move them someplace else to satisfy some paper-shuffling a-hole in the planning department.”

Under Wanker’s ruling, all of the tigers must be removed from the property by the time the two defendants are scheduled to appear back before the judge in September.

An additional element of the case the defendants said, is the literal definition of the facility.

Mielzynski said if Big Cat Encounters Ranch was a non-profit agency, the issue would not be an issue.

Additionally, a new designation for the land could also help save the tigers.

“If this land was de-annexed by the county commissioners, this whole issue would be moot,” Mielzynski said. “Even though the property is zoned for tigers, we wouldn’t have to get a conditional use permit.”

Mitchell, meanwhile, said local officials should take the time to learn about a federal law that supports his position.

“The Endangered Species Act states in part, that government will take no action to disturb existing and thriving populations of endangered species,” he said. “That is a direct quote from federal law. To try to disturb us over a minor zoning infraction, is ludicrous.”

Mitchell also said local animal control officials assured him the issue does not fall under the auspices of Nye County Animal Control.

When reached for comment on Thursday, Nye County Emergency Services Director Vance Payne issued a brief statement on the matter.

“We have neither training nor facilities to address big cats,” he stated in an email.

Mielzynski said it was a single complaint from a local resident that put the issue on the county’s radar.