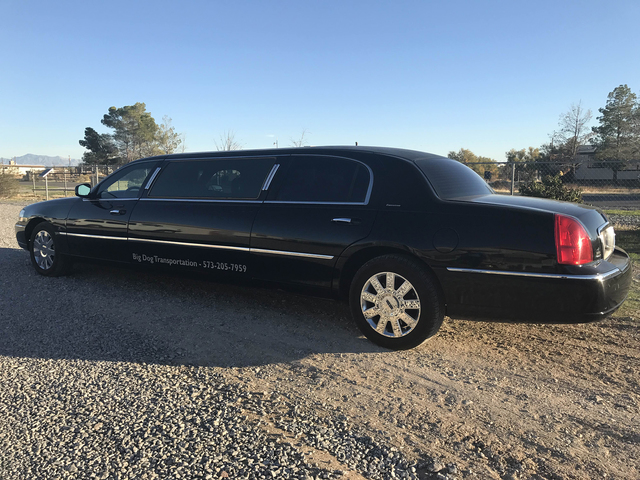 After a tragic accident involving a drunk driver nearly killed his wife, Big Dog Transportation owner Mike Chow got the idea to start a limousine service in town to escort residents around town safely, to special events and more, in a fashion not readily available in Pahrump. Mick Akers/Pahrump Valley Times

With most small towns, options are scarce for those who don’t have a car or want to utilize private transportation for a special occasion.

With just one cab company in town for residents to choose from, one local businessman is upping the ante and providing a limousine service.

Mike Chow, owner and operator of Big Dog Transportation, said he got the idea after a tragic incident involving his wife years ago.

In September 2012, Chow’s life was turned upside down when his wife, Theresa Whitt, was struck by a drunk driver.

Whitt was critically injured in the unfortunate incident, but she is alive and well.

To help prevent more instances like this from happening again, Chow thought of his business idea.

“My wife was run over by a drunk driver here in town and I thought if I could offer a service for people to get a ride home, instead of driving home, I’d like to do that,” Chow said.

He sat on the idea until it happened that one of Chow’s friends had a vehicle that he was looking to get rid of.

“I had a buddy of mine tell me that he had a limo for sale, and I thought that would be fun, so I decided to buy his limo from him,” he said.

Chow just began running his limousine that seats six occupants, a few weeks ago and is ready for all travelers.

At this point, Chow said he’s been doing a lot of trips between local casinos and Mountain Falls, but he has transported fares to special events in town as well.

Aside from local transportation, Chow will take trips outside of town to the bordering tourist attractions.

“I’ll go to Death Valley and take people to Scotty’s Castle or if they want to go to the date ranch, I can do that,” he said.

Down the line Chow hopes to expand his services and transport fares over the hump and back.

Chow charges a flat fee of $70 per hour, with a two-hour minimum on any ride. If a party does not need the six-passenger limo, he also has a town car that can seat up to four occupants as well.

As business picks up down the road, Chow hopes to add another vehicle to his fleet.

“If it catches on I might even put out another limo, so that we could have two running around,” he said.

In all, Chow just wants to ensure residents can go out and enjoy themselves and get home safe at the end of the night, in a style Pahrump hasn’t seen.

In addition to his normal business, Chow said he’s willing to work with organizations and work with them to provide his limo service for special occasions.

To contact Mike Chow at Big Dog Transportation about setting up a limousine ride, you can reach him by phone at 573-205-7959 or email at Mchow70@yahoo.com.

All potential riders are asked to give Chow at least a few days notice for longer trips.