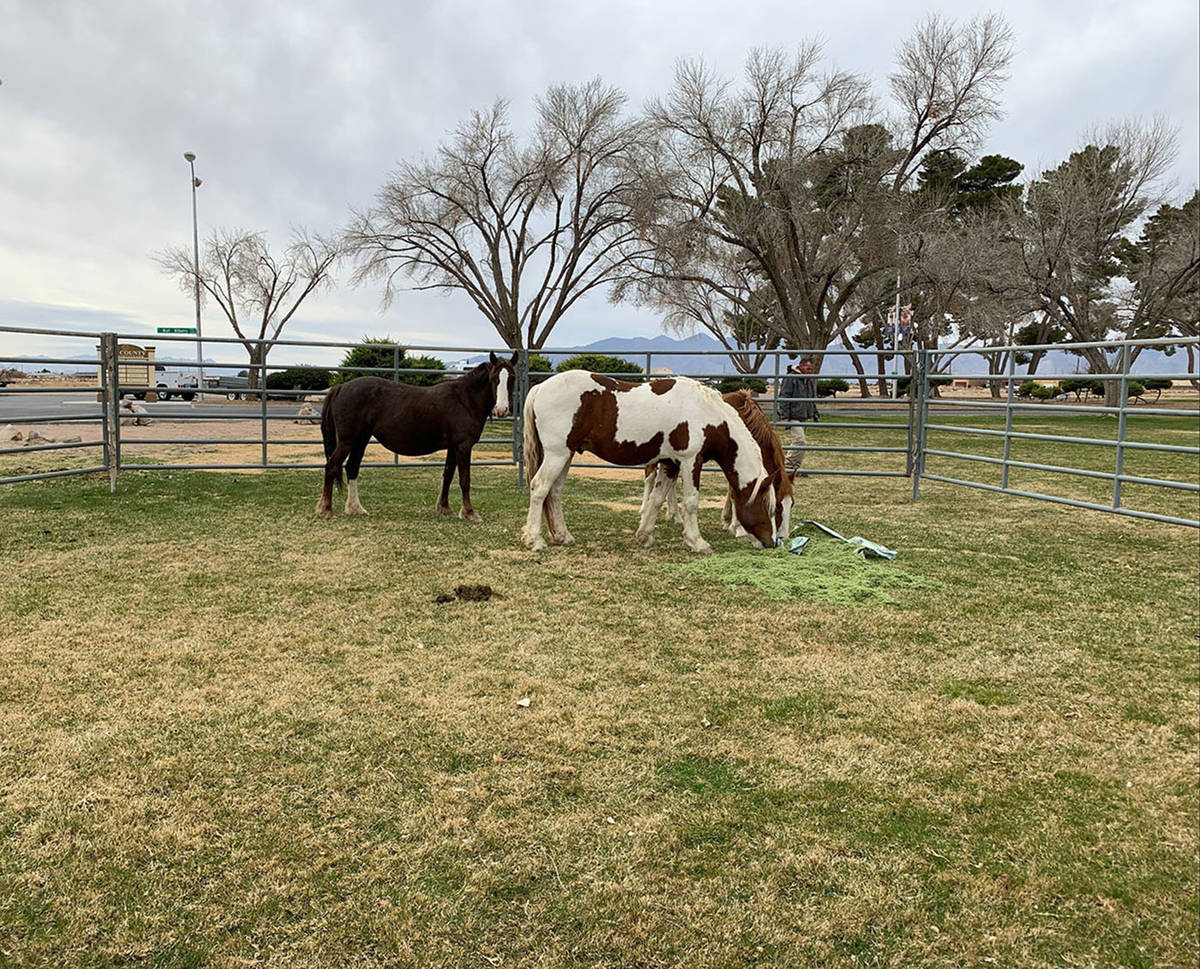 Bureau of Land Management The Nye County Sheriff's Office, along with Pahrump Buildings and Grounds officials, assisted with the removal of at least three wild horses from the Calvada Eye on Tuesday morning, March 9. Corral panels were baited inside with fresh hay, which lured the horses in. Once rounded up, the horses were transported to a facility in Ridgecrest, California.

Additional information has emerged regarding the relocation of at least three wild horses who graze the Calvada Eye.

Though they are a source of amusement and delight to many local residents who drive by the area, Bureau of Land Management officials (BLM) consider them not just a nuisance, but also potentially dangerous to people and pets, according to BLM Field Staff Ranger Ryan Gallagher.

“We did do an emergency gather here at the Calvada Eye, and there were in particular three horses that have been here pretty much exclusively for several weeks now,” he said. “One of the biggest concerns was a stallion paint horse that was hit by a car about two weeks ago, and we noticed him starting to limp so we needed to take a good look at him.”

Another horse that was relocated was also a mare, who was pregnant and close to giving birth to her foal, which was a serious concern for Gallagher and other BLM officials.

“We noticed the stallion acting aggressively toward her in the last week,” he said. “Generally speaking, wild horses are not the most, shall we say, compassionate family groups. If a foal is not that stallion’s foal, and he’s intent on breeding a mare, he will kill the foal in order to get the mare to go into season again. We’ve also learned that particular stud horse has been involved in two persons getting injured after getting kicked, in addition to the car collision he was in. I actually watched him chase the mare and almost run over some folks walking their dogs here who had nothing to do with the horses.”

Conversely, Gallagher said that the actions of individuals can pose grave consequences for the horses.

He spoke about the importance of not feeding the wild horses.

“They can get hurt feeding, and not feeding the horses, because they are getting accustomed to being fed,” he noted. “It does attract the horses and they do cross the highway here, and it actually is incredibly harmful for the horses.”

Aside from the chance of getting struck by a vehicle while crossing the highway, Gallagher said there are some foods that should never be fed to horses.

“Some of the items that the horses are being fed, and they way they are being fed is very harmful,” he said. “Whole apples and whole carrots are hard food objects that a horse can choke on, and choking is a serious consideration with horses because a horse does not have the ability to cough or regurgitate, so if they get a hard object of food stuck in their throat, they’re going to die. Most veterinarians will euthanize a domestic horse if that happens. I’ve had to do that with a personally owned domestic horse and it’s an ugly day.”

As a way to dissuade people from feeding the horses, Gallagher said individuals can and have been cited.

“Folks can certainly be cited for it,” he warned. “It’s both a violation of federal law, and there’s a Nevada state law that prohibits the feeding of feral livestock as well. Feeding a horse that’s not yours, be it a wild horse, a stray horse, or somebody else’s horse in their yard is just not polite and not smart because a lot of horses are on managed diets, and it can really really harm them.”

Additionally, Gallagher said the three wild horses will most likely be put up for adoption at a facility in Ridgecrest, California once they’ve been medically examined.

For additional information on possibly adopting a wild horse or burro, visit www.blm.gov/programs/wild-horse-and-burro/adoptions-and-sales.