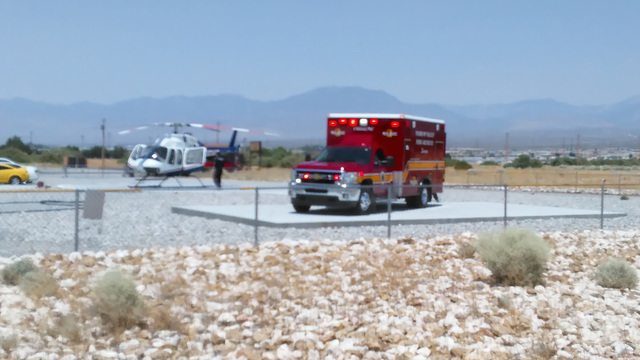 Pahrump Fire and Rescue medics carry a 4-year-old child to a waiting Mercy Air helicopter after he was found at the bottom of the family swimming pool on Monday. The boy was conscious and breathing when medics arrived at the home along the 700 block of Mt. Charleston Drive. Selwyn Harris/Pahrump Valley Times

A four-year-old Pahrump boy was flown to Sunrise Hospital in Las Vegas after a family member discovered him at the bottom of the family pool on Monday.

Pahrump Valley Fire and Rescue crews responded to the home along the 700 block of Mt. Charleston Drive just after 1 p.m.

Initial reports indicated the boy was submerged for roughly one minute before he was discovered and pulled from the pool.

Medics transported the boy, who was conscious and breathing, to the Mercy Air helipad on Calvada Boulevard, where he was flown to Sunrise Hospital in Las Vegas.

Nye County Sheriffs deputies also responded to the scene and are investigating the incident.