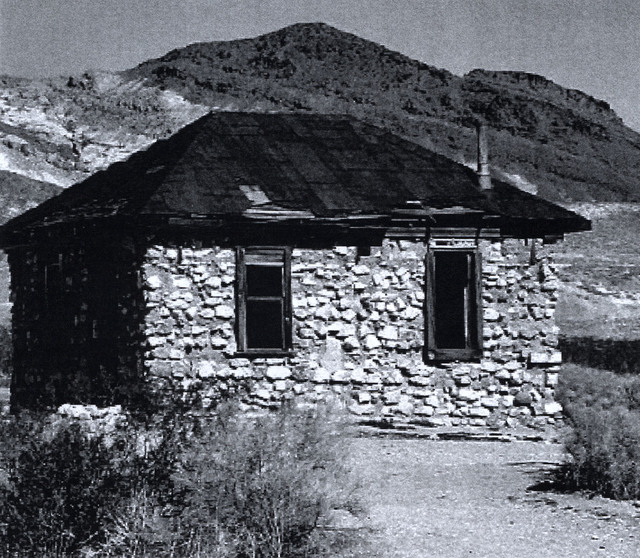 Frank “Shorty” Harris and Ernest “Ed” Cross are credited with the discovery of gold in the Bullfrog Hills in August 1904 that led to the founding of fabulous Rhyolite.

As Shorty Harris said 25 years later, “Rhyolite grew like a mushroom.” By that time, Rhyolite had joined the long list of central Nevada ghost towns. But oh, what a beauty of a town—really a city—it was for a few years! In 1907, Rhyolite’s population was 6,000; it was the fourth largest town in Nevada behind Goldfield with about 20,000, Tonopah with 10,000, and Reno with 8,000.

Rhyolite, of course, had its brothels. And it is still a darn good ghost town. Beatty historian Suzy McCoy, the leading expert on Rhyolite history, reports that 21 Hollywood movies have been filmed in the old town, including Cherry 2000 in 1985.

Mabel Vaughn was the first woman to buy property in Rhyolite. In April of 1905, she purchased a lot on the corner of Amargosa and Broadway Streets for $150 and began doing business in a small crib she constructed on her property. The only other brothel in what became Rhyolite’s red-light district at that time was the Adobe Dance Hall located on two lots on the corner of Amargosa and Colorado streets.

The Adobe was constructed in May of 1905 by an old prospector named Bob Buynum. Robin Flinchum, in her book “The Life and Death of Mona Bell in Rhyolite,” reported that the Adobe featured a dance floor and a bar; women were paid for a dance. Flinchum says the men with whom the women danced purchased drinks of whiskey for them—really tea. A long corridor ran alongside the dance floor that led to several rooms where prostitutes “entertained” customers.

Women who worked in the other establishments along Amargosa Street often came to the Adobe to socialize and spend Christmases and New Year’s there. The Adobe was, says Flinchum, “a social center” … where … “prospectors and miners gathered together to drink, dance and dally with women.” Various sporting events, including boxing, were held there.

Rhyolite’s red-light district soon became firmly established in the neighborhood around the Adobe and within two years the boundaries became official.

According to Flinchum, Mabel Vaughn’s brothel marked the “northwest outer limits” of the red-light area. She says that the district was originally bound on the north by Broadway, on the south by Colorado, on the west by the alley between Main and Amargosa and on the east by Lad Street. Only in this area was prostitution legal.

Women were permitted to work within the district provided each paid a $5 license fee. Flinchum points out that prostitutes were discouraged from living outside the red-light district and were not supposed to stray beyond the district’s boundaries. Mabel Vaughn did buy an upscale lot in town and built a house there which she likely used as a retreat. Most of the women, however, lived in the brothels where they worked and spent their time.

In death however, the prostitutes were the equals of others in town, being allowed to be buried in the local graveyard.

Flinchum says there was wide variability in the brothels in Rhyolite’s tenderloin district. She says they varied from the “sumptuously elegant” to the “raucous sort.” Typically, things were quiet in the red-light district during the day but at night the district came alive.

The brothels in Rhyolite were among the most valuable properties in town. According to the 1907 tax assessment, the Adobe Saloon and Dance Hall’s value was estimated at $2,600.

In contrast, “the entire workings of the Montgomery Shoshone Mine” (not including mineral rights), which was the number one mine in Rhyolite, was estimated at $6,400. Rhyolite brothels thus had a value that could equal that of the best local mine.

By 1908, Rhyolite had reached its prime. In August of 1908, there was a fire on the upper west side of Amargosa Street that destroyed “several substantial buildings including the Jewel Consolidated.” Mabel Vaughn never rebuilt her brothel; she moved to San Francisco. Flinchum says that “eventually a small string of cribs replaced the Jewel, but the days of elegant brothels on Amargosa Street were over.”

Henry Duvall continued to operate his brothel and cribs for several more years.

By 1909, tax assessments were $1,050 on the Adobe and $130 on Henry Duvall’s brothel. In 1910, Henry Duvall was still living in his brothel with several “female ‘lodgers.’” Flinchum states the population of Rhyolite’s tenderloin in 1910 was less than 20 inhabitants, with most “living in less than sumptuous conditions.” She says the hundreds of women who had once lived in the Rhyolite tenderloin had moved on to such places as Tonopah, Goldfield, Pioneer, and California.

Henry Duvall moved to Las Vegas in 1911. Interestingly, to demonstrate how quickly configurations in history can change, Mabel Vaughn maintained her ownership of the property on which the Jewel had been located, then in 1914 let it go for $4.96 tax debt. These figures illustrate the best way for a community to eliminate prostitution, perhaps the only way, is to either destroy the supporting economy or depopulate the area. History makes it clear no other method for ending prostitution really works.

As mining camps in central Nevada grew, the presence of brothels typically became restricted to one or more specified areas of town.

But, as with all rules and laws, such restrictions were sometimes violated; this was the case in Rhyolite.

In January 1907, an editorial in the Bullfrog Miner, Rhyolite’s newspaper, featured an editorial about the tendency of prostitutes and their brothels to stray beyond the boundaries established earlier.

“Early in the history of the camp,” the editorial said, “these bounds were defined and it is the purpose to maintain these limits.”

The editorial noted the comment of a member of the local board of trade, who suggested, “The social evil may be as necessary to a mining town as the burro, but the prostitutes must be kept in their places.”

Robin Flinchum quotes from William Carruthers’s book, “Loafing Along Death Valley Trails,” when he tells of returning to the then-deserted streets of Rhyolite: “I made a campfire in Rhyolite’s empty streets and beside it tried to sleep through a biting wind that seemed aptly enough a dirge. The next morning I poked around … to marvel at the things left behind …the cribs still bore the cast-off ribbons and silks of the girls and for all I know, the satin slipper which I found on a bed may have been the one that Shorty Harris filled with champagne to toast the charms of Flaming Jane.” Don’t you love it?

In a satin slipper filled with champagne Shorty Harris toasts the charms of Flaming Jane.

Today, Flinchum says, “The only real remnant of the old red-light district is the crumbled foundation of the old Adobe dancehall, the first substantial building erected in the Rhyolite tenderloin and the last to give up the ghost.”