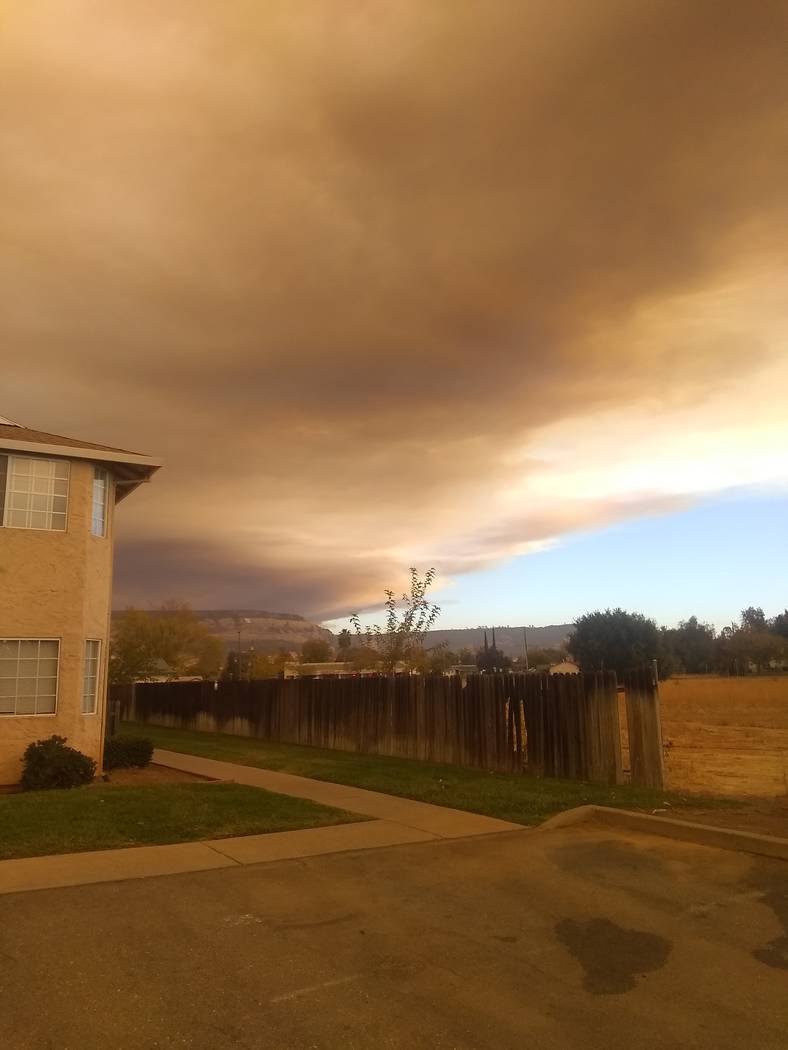 James Schwartz/Special to the Pahrump Valley Times California resident James Schwartz fled the most destructive fire in California state history: the Camp Fire. Plumes of smoke can be seen from his mother's apartment in northern Oroville just two days after the fire broke out in Paradise, California. 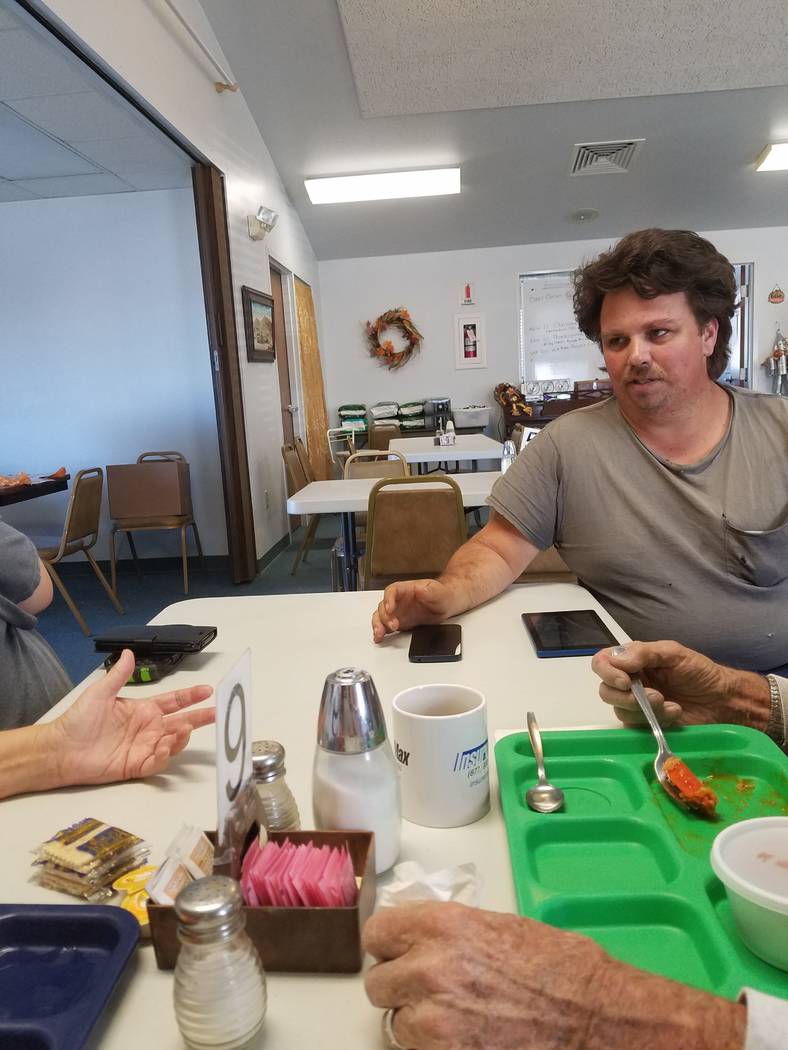 Jeannie Newberry/Special to the Pahrump Valley Times California resident Thomas Schwartz of Oroville, California sits at the Tonopah Senior Center in Tonopah on Nov. 14, 2018. Schwartz left his home in California to escape the Camp Fire, which has burned some 140,000 acres as of 8 a.m. Nov. 15, to stay with family in the Nye County area. 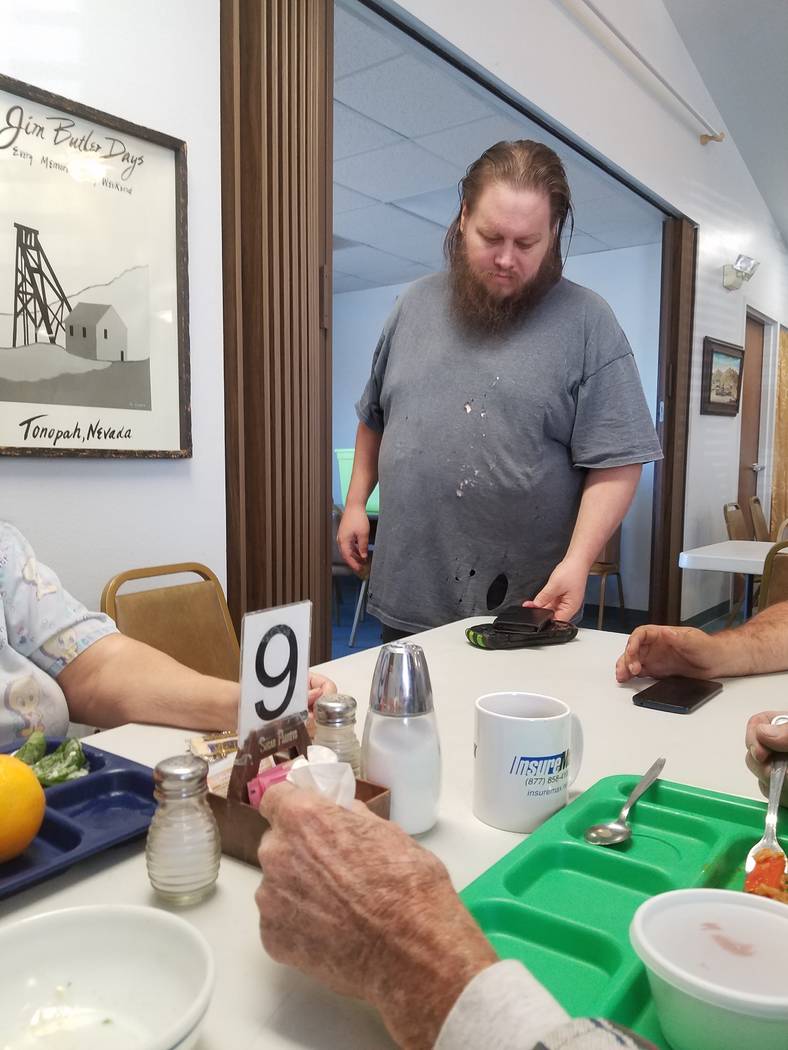 Jeannie Newberry/Special to the Pahrump Valley Times James Schwartz at the Tonopah Senior Center on Nov. 14, 2018. Schwartz is staying in a family residence in Tonopah until wildfires near his home in Oroville, California are under control. 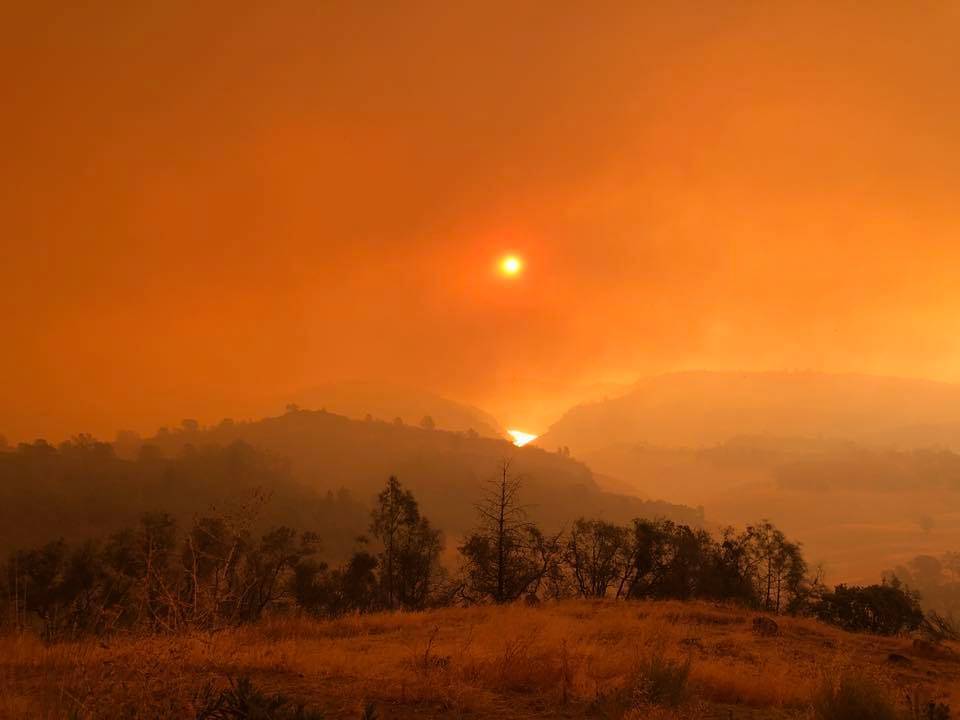 Reno Firefighters Association The Camp Fire that broke out in Paradise, California quickly became the most destructive fire in California state history. In the first two days of its destructive path, over 6,700 structures were destroyed, which increased to nearly 9,000 commercial and residential structures as of 8 a.m. Nov. 15. 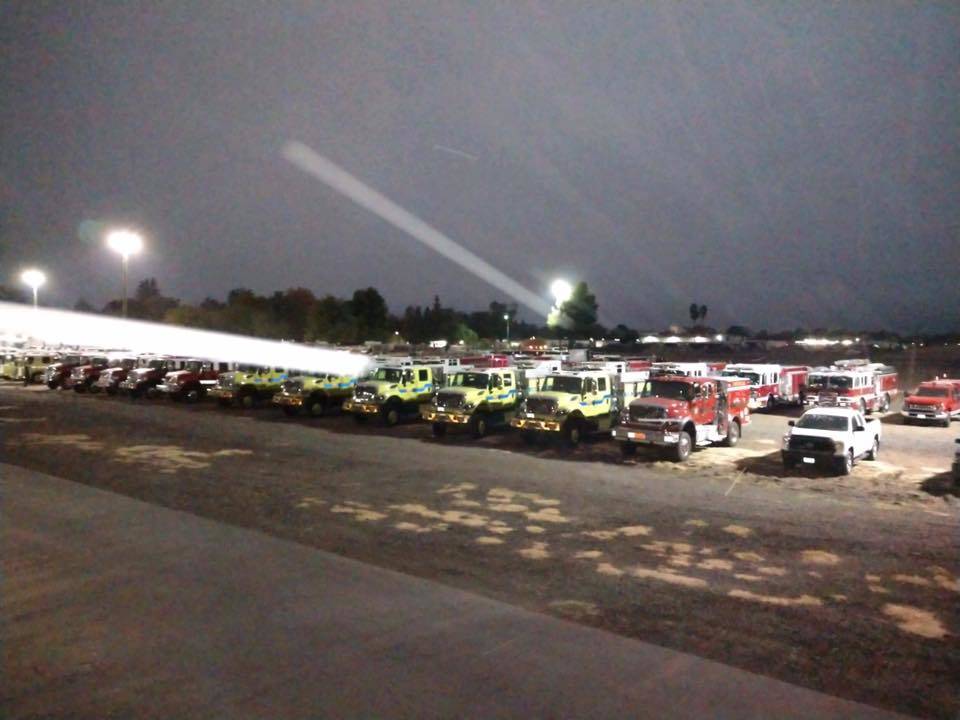 Reno Firefighters Association Over 600 fire engines, two dozen helicopters and more than 5,400 fire personnel are on the ground fighting the largest fire in California state history: the Camp Fire. The blaze has destroyed thousands of structures in Paradise and Butte County area. 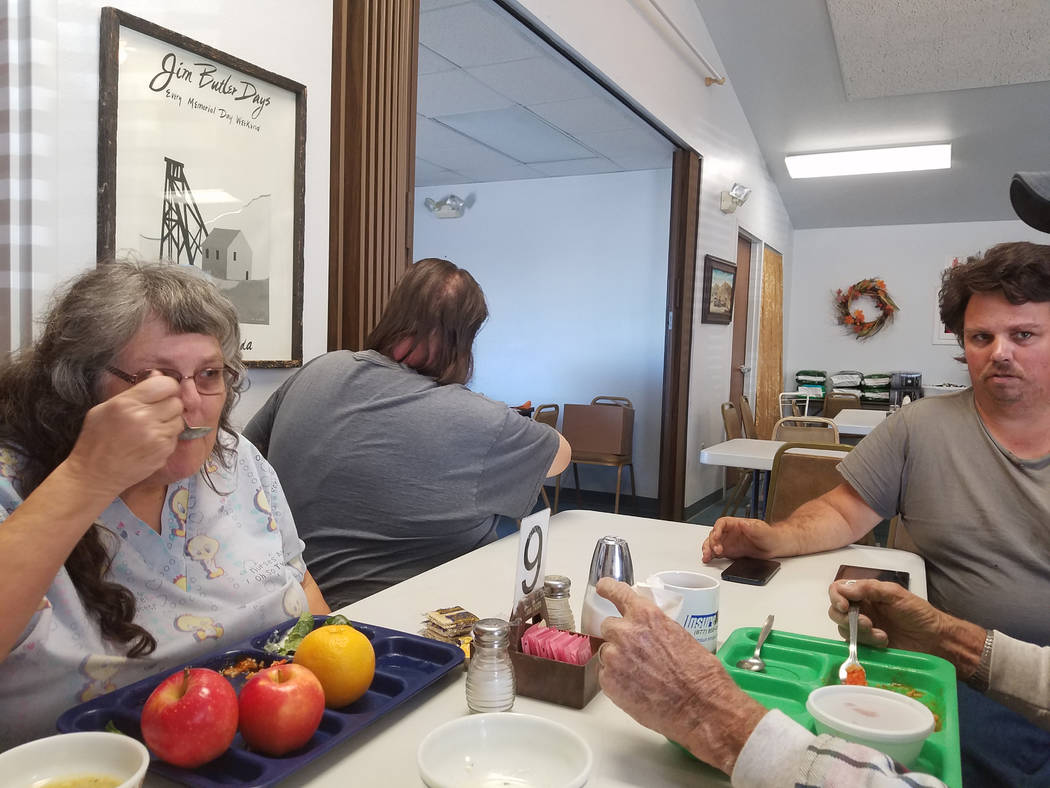 Jeannie Newberry/Special to the Pahrump Valley Times Sharon Robinson-Schwartz sits with her son Thomas Schwartz at the Tonopah Senior Center on Nov. 14, 2018. The two of them, along with Sharon's other son James Schwartz, are staying with family in Tonopah due to the Camp Fire in California that has burned roughly 140,000 acres and destroyed thousands of homes in the region. 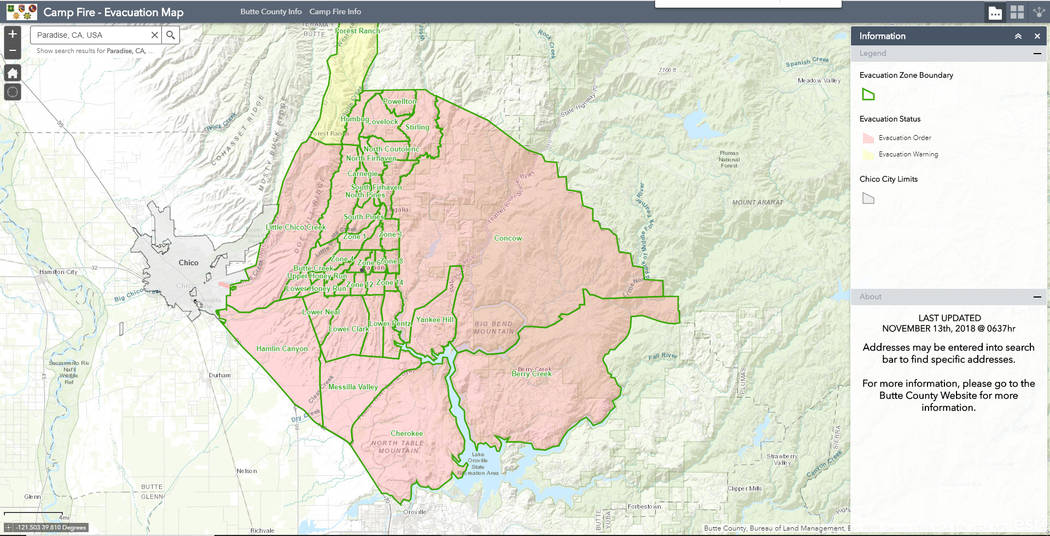 Special to the Pahrump Valley Times Screenshot from nifc.maps.arcgis.com of the mandatory evacuation zone in the Butte County, California area. 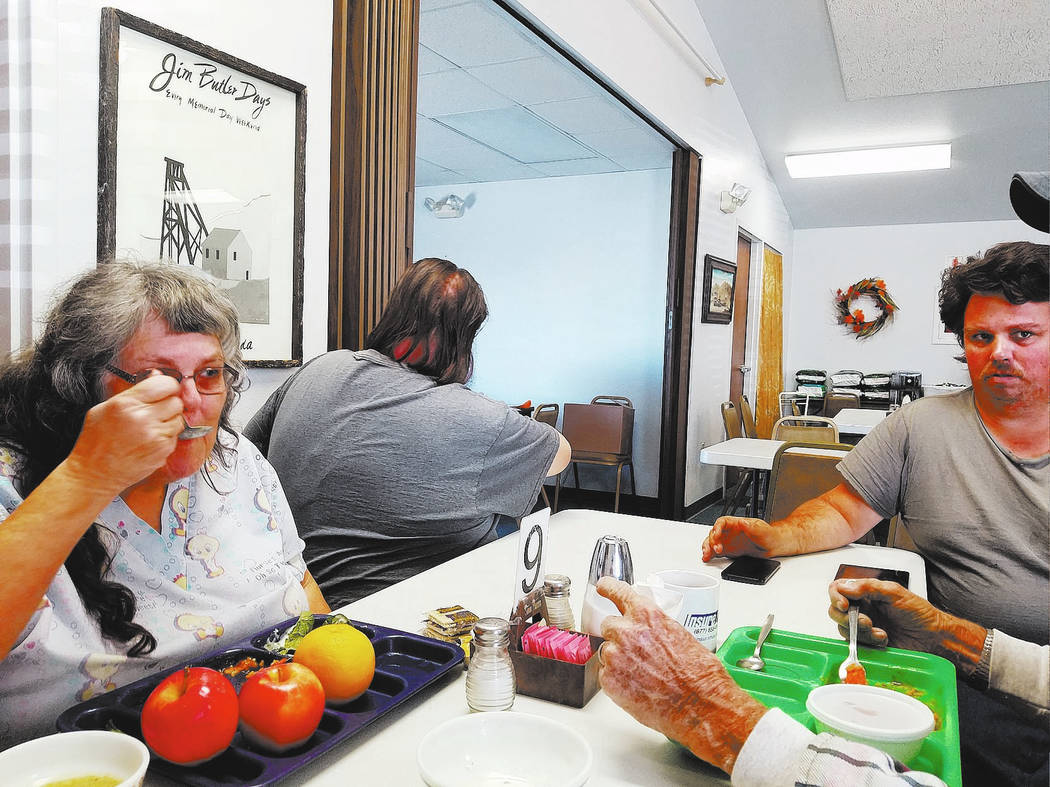 Sharon Robinson-Schwartz, 70, of Oroville, Calif. was visiting her daughter in Tonopah in early November when the Camp Fire, the most destructive fire in California state history, broke out in the town of Paradise, though the blaze is also affecting several surrounding areas as well. Robinson-Schwartz’s home sits just blocks outside the mandatory evacuation zone.

As of about 8 a.m. Thursday, the fire had destroyed more than 8,700 residential structures and 260 commercial structures and was threatening 15,500 more structures. Sadly, 56 fatalities were being reported by Cal Fire (California Department of Forestry and Fire Protection) with three injuries; a list of missing persons released by the Butte County Sheriff’s Office also contains some 300 people.

Robinson-Schwartz, who has lived in the Oroville area for roughly five years, said she is planning to stay in Tonopah until the fire dies down due to respiratory issues.

Sharon was joined by her two sons, James and Thomas Schwartz in Tonopah, who evacuated the area following a warning from another family member in Paradise that they may need to evacuate. Sharon’s apartment in Oroville is within a few blocks outside the mandatory evacuation zone map from Cal Fire.

Sharon is staying with her daughter in Tonopah, Jeannie Newberry. James and Thomas are staying in another property in Tonopah that Newberry owns with her husband.

“At least we have the space for them; that’s a good thing,” Jeannie said.

The three now temporarily displaced by the fire, especially Sharon and James who are asthmatic, don’t want to return until the smoke clears.

According to Cal Fire, as of early Thursday morning, the Camp Fire is now 40 percent contained and had burned 140,000 acres.

Sharon said her boys collected some of her important things from her home in northern Oroville before heading to Tonopah. They were also able to grab Sharon’s cat and bring the animal to a safer place in Central Nevada.

“When they left, they were seeing, it was raining ash and the smoke was so bad,” Sharon said about what her sons saw when they left the area on Nov. 10.

The blaze began burning just a couple days before that on Nov. 8. The fire quickly became listed as the most destructive fire in California state history. Just over a year ago in October 2017, the Tubbs fire destroyed 5,636 structures and caused 22 deaths in Napa and Sonoma counties.

In the first two days of the Camp Fire, more than 6,700 structures were reported as a total loss by Cal Fire.

Despite the dangers, Sharon said she plans to return to her apartment when the fire is gone.

“I have a sister that has heart problems, and she owns a house in the area; so until I know my sister is safe, I’m going to stay close to her because I’m one of her caregivers,” she said.

Sharon said the last major event was when she was evacuated due to issues with what is known as the Oroville Dam. Roughly 188,000 residents were ordered evacuated in early 2017 after a hole in an emergency spillway was discovered, which, at the time, was said could lead to flooding the surrounding area.

Sharon said she hasn’t had any major issues with evacuation with fire before the recent fire keeping her in Nye County with family. Prior to living in Oroville, Sharon was living and working in Napa, though that was before the big fires that struck that area in 2017.

Sharon’s apartment back in Oroville is near several government buildings such as the sheriff’s office and Butte County Clerk-Recorders building.

“I’m hoping with all of them there, they’re going to make sure my place is safe too,” she said.