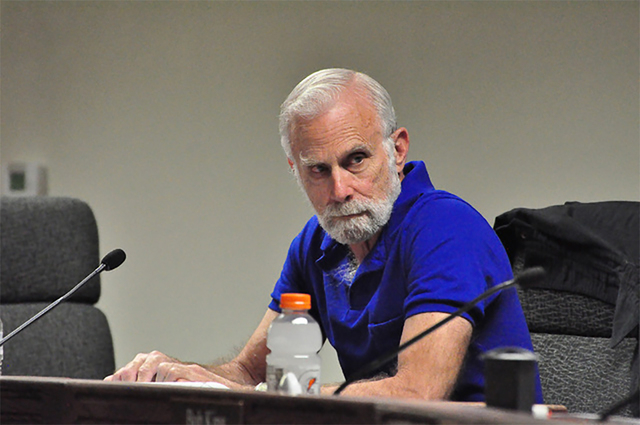 As a candidate for the Nye County District II Commission seat, John Koenig believes his decades of management experience and problem solving provide him with the credentials to take on the position.

Koenig’s 12-year residency in the community came after attending the University of Bridgeport and the Bridgeport Engineering Institute in Connecticut years ago.

His last job before retiring in Pahrump was a systems manager for an eyeglass manufacturer.

Koenig, chairman of the Pahrump Regional Planning Commission and a member of the Nye County Regional Transportation Commission, spoke about his district and what he has been working to help establish.

For years, residents in that area have proposed what is tentatively known as “Last Chance Park,” an equestrian and pedestrian community park to enhance the rural identity of Pahrump.

Koenig noted he and the residents are finally beginning to see the “light at the end of the tunnel.”

“It’s getting closer to reality,” he said. “District II is in the northern area and it’s pretty quiet up there,” he said. “I’m trying to help some people with Last Chance Park, which is in that district. We are trying to get some trailheads set up. Being on the transportation commission, we are trying to help Linda Hatley, a member of the Pahrump Public Lands Advisory Board, get permission to put a few of them in and see how they work out.”

By virtue of his positions on two commissions, Koenig believes his experience outpaces others running for the seat, as outlined on his website.

“A county is an administrative division of a state, typically consisting of multiple municipalities and/or unincorporated areas,” he noted. “County government provides a variety of services, including court systems, health services and public utilities. County commissioners are elected officials who serve as the chief executives of counties.”

Koenig also said the actions of elected officials should always reflect the best interests of voters.

Fiscal responsibility, Koenig said, is an important aspect to the position.

“A county commissioner reviews and approves the county budget, implementing and/or reducing property taxes to meet the county’s financial needs as necessary,” he said. “I believe my background in management and problem solving makes me the best single candidate for county commissioner.”

On the issue of re-establishing the Pahrump Town Board, Koenig said he currently sees no reason to take the action at the present time.

“Cost-saving measures are being introduced to try and ‘build a piggy bank’ for future use in the fairgrounds and other endeavors that the people seem to want,” he said. “I am always available to discuss this with anyone who wishes but it would take a lot of convincing to change my mind.”

Born in Long Island, New York, Koenig and his family and moved to a small town in Connecticut with no high school when he was nine.

“They finally built a high school when the population could support it and I was in the first graduating class,” he said. “I was married at 17 and we went on to have four children and now, five grandchildren and nine great-grandchildren. I have been married to my lovely wife for 34 years now.

Koenig was just 15 when he started working at a Texaco gas station and went on to work for a tech company when he reached 18.

He received his amateur radio license at 21, which allowed him to move up in the company.

Koenig is a life member of the American Production Control Society, an NRA member, and has attended UNR in local leadership.