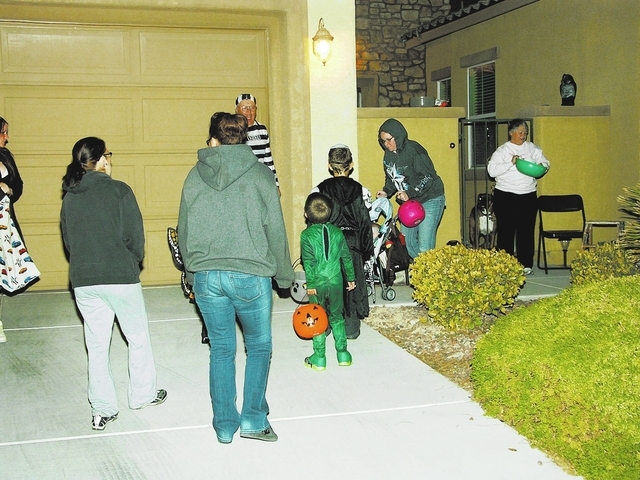 Celebrating Halloween in Pahrump is not as easy as it sounds.

Sure, many residents do take the time to carve pumpkins and put up scary displays in the front yard, but what about the act of actually going door to door in costume and uttering the age old words, “Trick or Treat?”

The problem lies in the sheer residential design of most homes and neighborhoods in the Pahrump Valley.

A large majority have much acreage surrounding the residences, which often forces kids to walk a quarter acre or more just to knock on doors.

Most homes have fences and gates to keep animals and belongings in while keeping intruders out.

As a result, parents of trick-or-treaters seemed to have come up with what appears to be the perfect solution — planned communities.

One such community attracted parents and children like moths to a porch light last Thursday.

Mountain Falls on the far south end of town has been a mecca for families who don’t take the annual event lightly.

Hundreds of celebrants with and without costumes could be seen haunting the streets of the community due mainly to its Halloween-friendly layout as all of the homes have sidewalks and street lights.

Local parent Chad and Taneeka Groen said they take their kids to the community each year just for safety’s sake.

“It makes it much easier because there’s less walking involved and the houses are real close to each other. We live off of Wilson near the hospital. I think we are on our last year because our youngest is getting a little older,” Chad said.

Earl Koppe, an 11-year resident said he relies on the convenience and accessibility the community provides.

Koppe noted that there are few other communities in town safe for Halloween revelers.

“Mountain Falls is a great place to go because it’s safe. The Winery and the Artesia community are also nice places to go. Most families love to go trick-or-treating and celebrate Halloween but the main thing is to keep your kids safe. It’s been excellent tonight so far,” he said.

Longtime resident Susan Moore took her granddaughter to the community.

Moore said those who do make the yearly visit to Mountain Falls should be respectful of those residents who decide not to participate in the celebration.

“It seems to be much easier out here. First you have to figure out exactly where to park and you also have to respect people and see whether they are open for business. If they don’t, you just need to keep going. I’ve noticed that a lot of people have been very respectful tonight. This is actually our first time venturing in here to trick-or-treat. It’s more for my granddaughter than for us. We also went to Southern Baptist Church tonight. There wasn’t a lot of kids but they had games and it was fun for the kids,” she said.

The fun was not just reserved for kids and their parents.

One homeowner in Mountain Falls said she looks forward to the celebration each year.

In fact, five-year resident Carol Grabner was actually greeting the costumed carousers on her front porch.

She could hardly get a word in edgewise as she was passing out an assortment of lollipops, chocolates and other goodies.

“I love Halloween and the little kids dressed up in their costumes; it’s wonderful. They come here in carloads. The very first year we moved here, we ran out of candy because we didn’t know how popular it was here,” she said.

Grabner also stressed the importance of safety on the night where kids approach the doors of strangers in pursuit of satisfying their collective “sweet teeth.”

“I sit out here because I wouldn’t want my child to go into the courtyard of my property alone. I usually go inside around 9 or 9:30. I have been very fortunate because the kids have been very good. Last year I had the whole high school cheerleading squad here. I think I had close to 500 kids stop by,” she said.

Mountain Falls resident Dennis Crooks and his wife spent the evening in the driveway of his home with two large buckets of treats.

Crooks even took the time to don a costume which somewhat mirrored his last name.

He was dressed as a convict with black and white stripes from head to toe which was drastically different from what he wore last year.

“I will say that some people who live here don’t like it but the vast majority I think get a kick out it. It gives the kids generally a safe place to come. We have parents all over the place who are supervising as well. You have to do something out here for the kids. We are all residents in the valley so why not? It’s just one night a year so it’s not going to kill us. We moved out here about five years ago from Wisconsin and we didn’t realize how big a deal this was. The first year we had about four or five bags of candy and it was gone in an hour and a half. Our last year in Wisconsin we had a total of five kids come to the house and now we have hundreds. One thing that I have noticed is that the kids are so very nice and their parents tell them to say thank you. It’s just really a nice polite evening and very little problems from what I have seen, so why not?” he said.