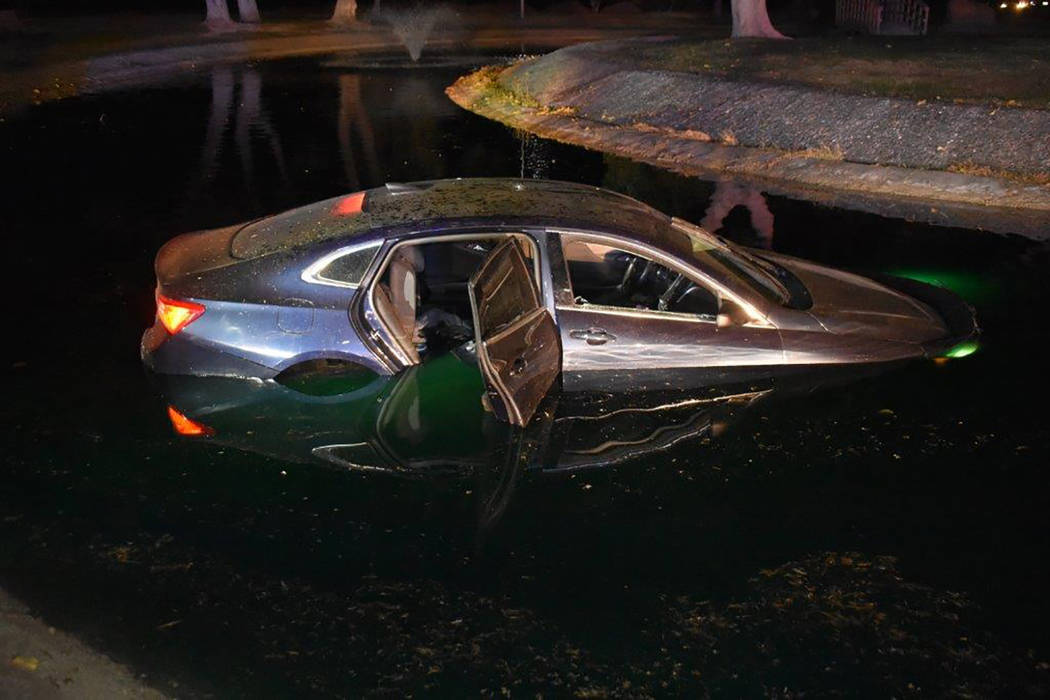 Special to the Pahrump Valley Times Nye County Sheriff's Deputies are investigating an incident where a car ended up submerged in the duck pond at the Calvada Eye. Pahrump fire crews responded, but did not locate the driver of the vehicle. 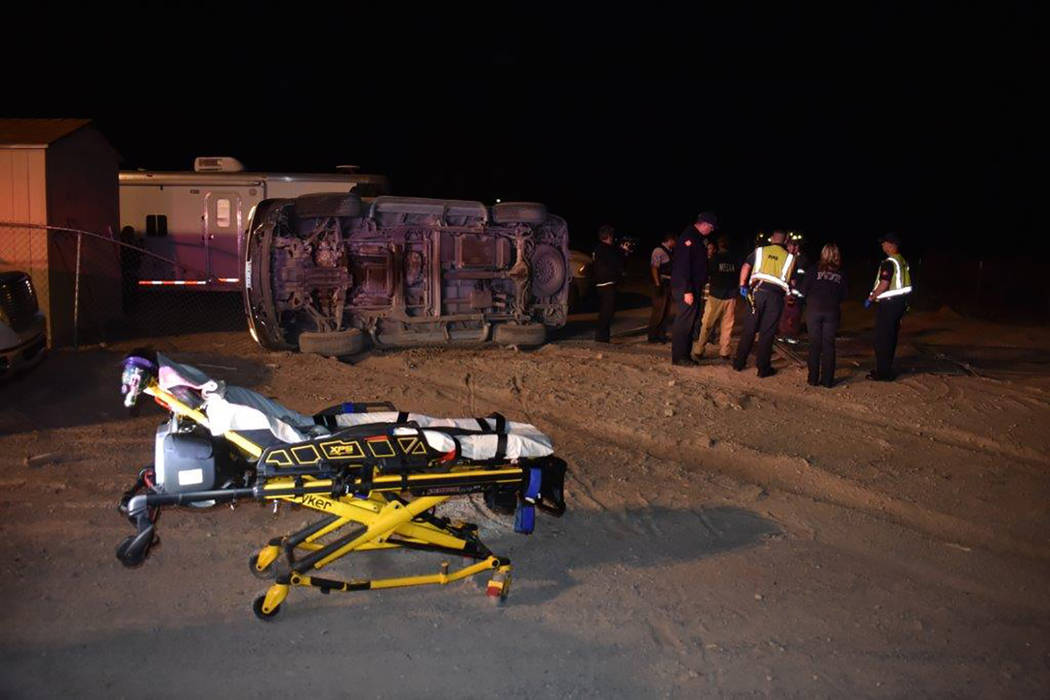 Special to the Pahrump Valley Times On Friday Nov. 9, emergency crews were dispatched to a rollover crash with entrapment in the area of Thousandaire Boulevard and Lisa Street just before 8:30 p.m. One patient was transported to Mercy Air 21 and flown to UMC Trauma in Las Vegas.

Area first responders found themselves responding to a head-scratching situation earlier this month.

“On November 1st, we were dispatched for a report of a vehicle accident with the vehicle resting in the duck pond at the Calvada Eye,” Lewis said. “There was an unknown status of the occupant or occupants. I arrived within a couple of minutes after dispatch and found the vehicle as reported, with the lights illuminated and the doors closed.”

Lewis noted that he and a sheriff’s deputy entered the pond sans waders, but found the vehicle unoccupied.

“We were dispatched for a report of a passenger vehicle fire along Highway 372 at Nye mile marker one,” Lewis said. “Crews arrived to find a well-involved passenger vehicle. Crews extinguished the fire without incident. There were no exposures and the cause of that fire is under investigation.”

The following day, emergency crews were dispatched to Highway 178, roughly two miles west of the Nevada state line for a single-vehicle crash just after 2 p.m.

“Upon arrival, we found a one-vehicle rollover crash with the vehicle resting on its side with entrapment,” Lewis said. “Rescue One went into service by removing the roof of the vehicle. That patient sustained injuries consistent with flight, and was flown from the scene to UMC Trauma in Las Vegas by Mercy Air.”

A vehicle versus pedestrian incident in the parking lot of Smith’s prompted the response of emergency crews just before 3:30 p.m. on Tuesday, Nov. 6.

“Crews arrived to find a 17-year-old female who had her foot run over by a vehicle in the parking lot of that business,” he said. “Crews provided care and transported that patient to the local hospital.”

Also on Nov. 6, fire crews were dispatched to the 2800 block of Dandelion Street for a reported structure fire just before 6 p.m.

“Crews arrived to find a mostly extinguished kitchen fire within an apartment,” Lewis said. “The investigation revealed the cause of the fire was an over-cooking incident which allowed the fire to extend to the remainder of the kitchen. There were two injuries but both patients declined medical transport from the scene.”

On Friday, Nov. 9, fire crews responded to an injury crash along Highway 160 and Dunes Drive just before 6 p.m.

Lewis said at least one person was transported to Desert View Hospital with non-life-threatening injuries.

The highway remained closed for the better part of an hour as crews worked to clear the scene.

Roughly two hours later on Friday, Nov. 9, emergency crews were dispatched to a rollover crash with entrapment in the area of Thousandaire Boulevard and Lisa Street just before 8:30 p.m.

“Upon arrival, crews found that both occupants had been pulled from the vehicle,” Lewis said. “One occupant sustained injuries consistent with flight. That patient was transported to Mercy Air 21 and flown to UMC Trauma in Las Vegas.”

While not responding to service calls, Lewis and crew attended several Veterans Day observances over the past weekend.

“Our tower ladder was in service, which involved the raising of the American flag at 11 a.m.,” Lewis noted. “We just want to thank all of the veterans for their courage and sacrifice that they display during peace and wartime. Thank you veterans.”