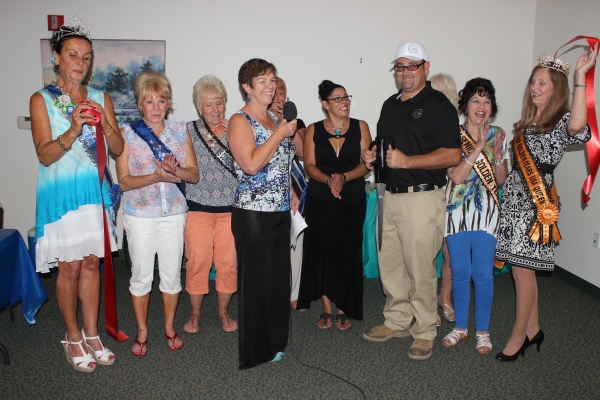 The area’s newest security firm was officially welcomed to the community earlier this month by the Pahrump Valley Chamber of Commerce.

Coleman Ccure Services was introduced to Pahrump on July 9, when CEO of the chamber, Sali Kerr officiated their ribbon-cutting ceremony.

The business began operations July 1 and were pleased with the ceremony’s proceedings.

“I felt that it was important to network with the Chamber and the whole community in order to make sure I establish myself as a new business,” said Coleman Ccure Services owner, Michael Coleman. “We had a bunch of people turn out and my wife made a bunch of goodies, so everybody was full when they left and it turned out good.”

Coleman and his family moved here in 2009 and he has worked in the security business ever since he came to town.

Coleman started the security firm after noticing a need for the service with a new type of business coming to town.

“I saw a need, especially with medicinal marijuana facilities opening up, and they’re required by law to have security,” Coleman said. “So those are some of the contracts that I am going after right now. Hopefully getting some of the medicinal facilities.”

Having a security presence at your unoccupied home or operating business could curtail potential crime, Coleman said.

“I also saw the need with all the hold-ups, the armed robberies and other break-ins and a lot of the property break-ins donât really make the paper because they donât know who did it,” he said. “There is definitely a need, it’s just about trying to reach out to the right businesses and helping to inform them of the risks.”

With him running the business locally, Coleman hopes residents take notice, as he said most of the security companies that operate in Pahrump are based elsewhere.

“The companies that contract those employees are usually not even out of Pahrump,” he said. “So a lot of those profits go to companies out of Las Vegas or headquartered back east. So one of the big things is trying to keep business local.”

With it being so early on, Coleman explained that the response to his new business has been varied thus far.

“The reaction has been kind of mixed,” he said. “There’s a lot of oldtimers that see need but then they don’t see the need. Also, one of my flat rates is targeted toward property management, so a lot of these properties that are managed sit vacant, a lot of them get the AC’s stolen and have loiterers and stuff like that.”

Coleman mentioned he hopes to create a safer environment where less AC’s get stolen and less properties getting vandalized with his flat-rate service, that includes three patrols per week of private residences that are unoccupied.

Coleman is still getting everything up and running and plans to start hiring at the end of July.

Despite being new, Coleman is already planning for the future once his business grows, as adding additional services is his goal.

“Hopefully as the business starts taking off, I hope to expand the services to professional bodyguards; and I am looking to grow throughout the state.”

In his spare time Coleman also volunteers with the Southern Nye County Search and Rescue as the training officer. Also, having twin boys with autism, Coleman and his wife feel it is important to stay active in the community, and are involved in several different causes in town.

Now until Aug. 31 Coleman Ccure Services is running a special on their flat-rate service which takes 20 percent off the total amount.