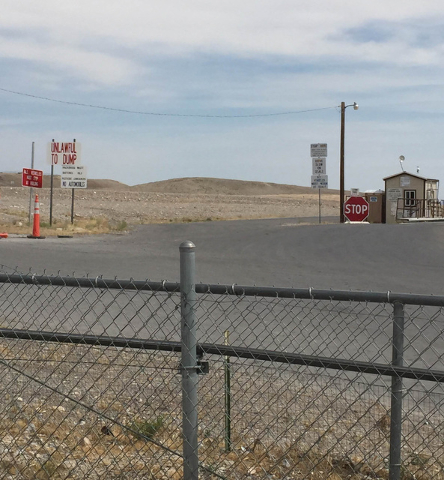 With illegal dumping around Pahrump increasingly becoming a big problem, a possible solution could be in place if one county commissioner has her way.

Donna Cox mentioned something needed to be done to curtail the problem during the Nye County Commission meeting May 5.

Cox suggested placing large dumpsters in six areas of town to save those who have a large item or excess trash a trip to the Pahrump landfill.

“This isn’t for small items,” Cox said. “I’m thinking of things they could do like cleaning up their yard, especially during spring cleaning, or old appliances.”

A recurring weekly pickup is what Cox is envisioning, but if that isn’t possible a less frequent service would suffice as well.

“They (Pahrump residents) all pay for garbage service anyway, so if we can throw an extra can out there it would really help,” she said. “Maybe they can pick it up when it’s full, or have a schedule like once every two weeks. Not a big thing where it’s picked up every day or every other day.”

Cox said even when residents do find their way to the dump, if the facility is closed when they arrive they tend to dump illegally in the area surrounding the dump.

This idea could also aid those who are elderly or just don’t have the means to transport large items to the dump, as the in-town bins could simplify getting rid of old, unneeded appliances for area residents.

“Just something to help those who don’t have any trucks, or any way to haul their bigger items,” Cox said.

So in addition to adding the additional bins around town, Cox also hoped the landfill would change their hours to better accommodate residents.

As it stands now, the landfill is open seven days a week from 8 a.m. to 5 p.m., although Cox is under the impression that they close at 4 p.m.

Cox explained that she has seen similar programs like the one she proposed work in other areas, so she’s confident it could work in Pahrump.

“I’ve seen this done in other small cities, like Mesquite and parts of Utah, so it’s not that uncommon,” she said.

The town already has an annual clean up day when they have a dumpster set out for those who want to help clean-up town. Making it more of a permanent program is the hope of Cox, in an effort to help beautify Pahrump.

Cox still has to meet with representatives from public works and the landfill to get this project rolling, but she will continue to work toward it coming a reality.

“I’d like to do this as soon as possible,” Cox said. “I thought that since I brought it up to (Public Works director) Dave Fanning that he would get to it and get back to me at the next meeting if I’m not able to get to anybody in the meantime.”