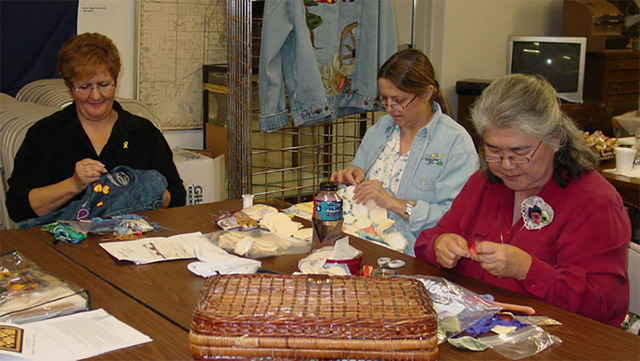 Members of Pahrump’s Shadow Mountain Quilters will begin creating pillowcases and hygiene bags this month for valley students in need. Upward of 500 of the items will be given away to the children later this year. Special to Pahrump Valley Times

Children in the Court Appointed Special Advocates (CASA) program also stand to benefit from the effort.

Hickman said several sewing groups in the community, including the Shadow Mountain Quilters, will assemble the bags and pillowcases for the more than 300 homeless students enrolled in campuses throughout the district.

The addition of children in the coalitions Youth Werks program and CASA, brings the total number of handmade items to close to 500.Organizing the sewing circle is longtime community member and professional seamstress Barb Johnston.

They also knit skull caps for the wintertime and just before winter break, we send all the schools the pillowcases and hats, he said. At the beginning of school, we pass out the hygiene bags, which contain shampoos, conditioners, bars of soap and toothbrushes.

Aside from donating fabrics, Hickman said they will gladly accept cash donations where the volunteers can purchase the materials themselves.

There will be a variety of different styled knitted hats, Hickman said. They like to get materials with colorful cartoon characters, and for the older kids, theyd like various patterns that look cool.

Fabric and monetary donations can be dropped at the coalition office, at 1020 E. Wilson Road, the Nye County School District Children in Transition Office at 484 S. West Street, or Nevada State Bank at 1301 S. Highway 160.