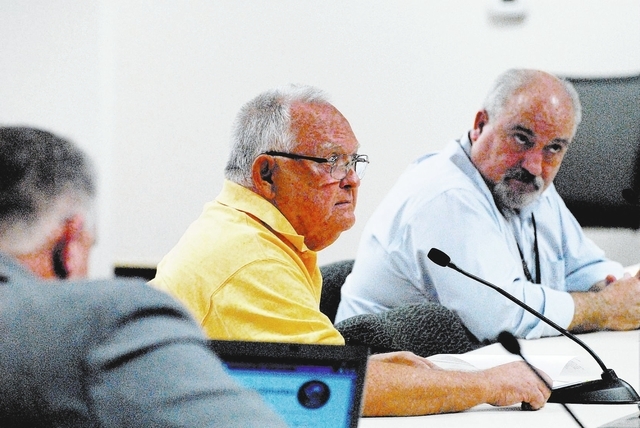 Nye County Commissioners denied a solid waste permit for B.A.E. Industries for a mulch and compost facility on 10 acres along Cook Road owned by the Settlemeyer Trust in Amargosa Valley, the latest dispute over dumping in the sparsely populated valley.

BAE Industries, out of Las Vegas, said they will be raising pigs to sell, and composting trees, brush, shrubs, grass mixed with food biproducts that would be fed to the pigs or composted. Compost will be applied to the land, sold or given away. The company said their material is organic and non-toxic, noting the nearest homes are 1,000 to 3,000 feet away.

During a Dec. 11 meeting the Amargosa Valley Town Board declared the operation a nuisance that wouldn’t provide any positive benefit to the area. A letter from town board chairman Joseph Cohan said it would have negative effects ranging from air and water pollution to flies. Nye County Code declares in its county policy no solid waste may be received or disposed of in Nye County unless the benefits accruing to the county exceed any adverse effects.

Amargosa Valley Town Administrator Mike Cottingim told county commissioners the company planned to ship 3,000 cubic yards of compost material, which would create a pile of compost 10 feet wide by 600 feet long and 13.5 feet deep every month. He said the compost pile is already visible from the highway a half-mile away. He expressed concerns the liquid pig waste would leach into the groundwater.

Amargosa Valley Town Board member John Bosta said they were unaware of the pig farming operation and questioned where the dead pigs would be buried.

Property owner Steve Settlemeyer vouched for the safety of the operation at the county commissioners’ Dec. 16 meeting.

County Commissioner Frank Carbone made a motion to deny the solid waste permit at the start of the agenda item discussion. County Commission Chairman Dan Schinhofen said the town board didn’t support it, he added commissioners received a complaint from an Amargosa Valley resident that trucks were already bringing in material.

Nye County Planner Darrell Lacy said B.A.E. Industries was planning to bring in some material from casinos in Las Vegas that would require a solid waste permit.

“Staff recommends 90 days would be given so we could clarify what exactly we’re doing. This is a farm. There is no solid waste on the property. Everything there is mulch to enrich the land and feed the animals. We’re bringing in a mulch material. It’s all farming material. It’s all organic, there’s nothing there you couldn’t sleep on,” Settlemeyer said.

“We never wanted a solid waste permit. We wanted to get some more time. When we went to the board in Amargosa it was almost like they were going to lynch us. We’re not trying to get anybody hurt, we’re just trying to farm the land in Amargosa,” he said.

But Carbone said there’s more to the story than just mulch and compost.

Cottingim said the type of material B.A.E. Industries wanted to dump in Amargosa Valley had been dumped in Pahrump and generated complaints to the Nevada Division of Environmental Protection.

“it doesn’t sound very organic to me,” he said. “At this point we don’t know exactly what is coming on site or for what purpose other than it is just not leaving.”

“I think they’re using a livestock area so they don’t need a solid waste permit,” he said.

County Commissioner Dan Schinhofen said there’s nothing in county code prohibiting the owners from having 200 pigs.

Settlemeyer said there’s nothing wasteful about trees and grass that are going to be mulched. He said the mulch machine cost $45,000.

NDEP wrote to Giovanni Nanci, of B.A.E. Industries, that state regulations allow a compost facility to operate without a solid waste permit if it’s used for agricultural purposes with no sale of the product off-site.

“Property values will go down even more. With the addition of this operation along with U.S. Ecology, Yucca Mountain, (the) dairy, that is all we will have in our area is waste,” Cottingim wrote in a letter to county commissioners. “Amargosa Valley is not Nye County’s dump.”

U.S. Ecology, 11 miles south of Beatty, is a federally-designated hazardous waste site, at the northern end of Amargosa Valley.

Amargosa Valley, where 1,000 people are spread out in a valley larger in area than Pahrump Valley, has had instances of dumping in the past.

In November 2010, A Honey Wagon was ordered by NDEP to stop dumping cooking oil in pits in Amargosa Valley from Las Vegas businesses. Three Nye County Commissioners had visited the site but didn’t find evidence to prove the oil pits were a public nuisance. Charges were dismissed in Beatty Justice Court against A Honey Wagon owner Mike Kostelac after he ceased operations.

In April 2004, U.S. Sen. Harry Reid, D-Nev. was credited with stopping the shipment of sewage sludge by the Orange County Sanitation District to the Funeral Mountain Ranch for use as fertilizer. A group in Amargosa Valley called Citizens Against Sewage Sludge organized to try to stop the shipments. The Orange County Sanitation District was shipping four trucks per day of bio-solids.

Reid, who was a member of the Senate Committee on Environment and Public Works, contacted then U.S. Environmental Protection Agency Administrator Mike Leavitt, expressing strong concerns over the application of municipal sewage sludge.

Amargosa Valley groundwater is also down gradient from the Yucca Mountain Project.