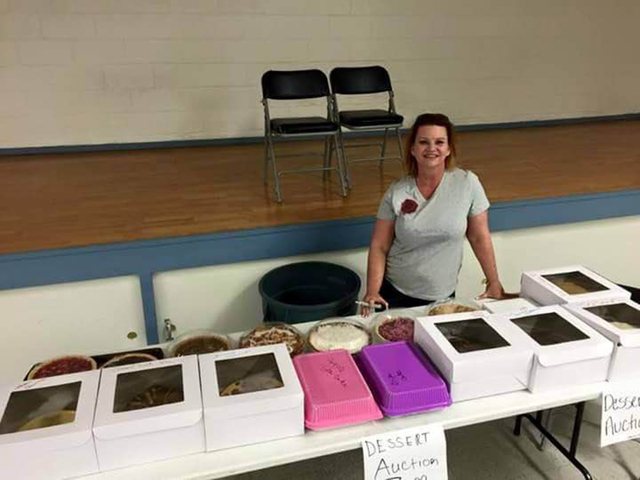 During her time working as a dispatcher with the Nye County Sheriff’s Office, a local business woman turned to the kitchen to help her deal with stress that her daily grind presented.

Learning to bake proved to be a perfect way for Nikki McPherson, owner of Debauchery Kitchen, to get through the tough spots in her day.

“There was some high stress stuff, some low stress stuff, nothing devastating, and I didn’t really know what to do to get over it. So I learned to bake,” McPherson said. “I started then, and used it as a stress reliever.”

McPherson, a Pahrump resident since 1997, admits she does not have a huge sweet tooth herself, so she turned to her co-workers to gauge how her creations turned out.

“I don’t eat the stuff, I don’t like sweets,” she said. “So I found myself taking it and feeding the deputies, dropping it off at juvenile probation or sending it to the fire department.”

McPherson has since moved on to the District Attorney’s office as an executive legal secretary, where she works side-by-side with attorneys, helping mainly with trial prep.

With the overwhelmingly positive response she’s gotten from her co-workers over the years, McPherson’s significant other gave her the encouragement to finally take the step of turning her hobby into more of a business.

“My boyfriend is a detective at the sheriff’s office, and about a year-and-a-half ago he said, ‘you need to do a business,’” McPherson said. “Cottage food laws in Nevada passed, so we’re going to start a bakery.”

Cottage food laws allow for a variety of foods to be sold, but all sales must be made in-person and yearly sales must not exceed $35,000. A permit from one of the four health districts in the state is also required.

McPherson now makes her treats that include, cakes, pies, cookies and jams, for various functions including birthday parties, coming away celebrations and weddings to name a few.

McPherson’s former employer, the sheriff’s office solicited her to bake some of her sweet creations to be sold at a dessert auction that was held a couple of weeks ago. The sales from her various treats were able to raise over $1,000 for charity.

Despite the popularity of her treats, McPherson sees Debauchery Kitchen as more of a side business for now, as her position at the District Attorney’s office and everything that come with that being too good to walk away from.

“I’d like to at some point start an actual bakery, but the problem right now is the licensing is all different and realistically to start a bakery would mean giving up my job, my retirement and my insurance.”

For now she’ll sell to anyone who makes a request and occasionally has an offering for patrons at Mom’s Diner like her cinnabon apple pie.

Her goods vary in price depending on the size of the dessert, but McPherson said a dozen palm-sized cookies run around $10.

Always looking to experiment with recipes and flavors, one of Debauchery Kitchen’s biggest hits is the jalapeno cheesecake that McPherson said she was inspired to make while watching a cooking show on television.

Although she is now in business selling her desserts, McPherson still uses baking as a stress reliever, and during the holiday season her ability to bake was hampered by equipment issues.

“I had just finished my very last cookie order, I pulled them out of the oven at 10 o’clock at night and at 3:30 in the morning alarms were going off,” she said.

Her oven issues kept McPherson from baking for three weeks, to which she found her loathing for her craft and tried to come up with different ways to suit those needs.

“I went through withdrawals,” she said. “I tried to make cupcakes on the barbeque, it didn’t work. So no barbeque cupcakes.”

You can reach Debauchery Kitchen at 702-327-9172, or online at www.debaucherykitchen.com.