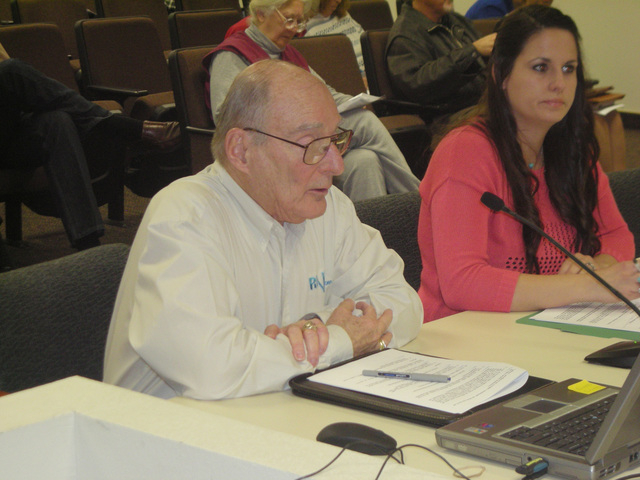 But Allan Parker, director of the Pahrump RNDC office, with support from a few others, including former Pahrump Town Manager Bill Kohbarger, made his case anyway at the Tuesday commission meeting. The request was granted. It will help with a $29,415 shortfall for the Pahrump office.

Parker said he has $10,000 in contributions pending from the Town of Pahrump and the Nye County Regional Economic Development Authority (NCREDA). He said Pahrump is one of 12 small business development centers in the state.

Due to sequestration, funding for the Small Business Development Center, Governor’s Office on Economic Development, NCREDA and others has been cut in half over the past three years. Up until now, the RNDC was able to absorb the shortfalls, Parker said.

The goals of the RNDC are economic development, business financing and healthy housing. Parker said he is a counselor for the Small Business Development Center, they also do business financing as a lender of last resort. There are also housing programs for residents including weatherization, homeowner rehabilitation and down payment assistance. Parker said the RNDC built the income-assisted Courtyard Apartments on Dandelion Street and the Palm Terrace on North Leslie Street.

Parker’s presentation said the business services include help drawing up business plans, information on starting up a business, capital formation, financial analysis, management advice, education and training. He said in his 11 1/2 years, the Pahrump RNDC office helped 433 clients, helped create 33 jobs and retain 28 jobs, when those 61 workers are multiplied by $30,000 annual salaries it equaled $1.83 million of capital infusion into the economy. The RNDC also helped residents obtain loans totaling $931,000, he said.

“Since we are also a lending of last resort we have also assisted 14 businesses which created 30 jobs and retained another 24, which again amounted to an income injection of $1.6 million. This time RNDC actually financed those businesses,” Parker said.

He offered to provide a free 13-week course in drawing up a business plan for up to 25 entrepreneurs of business executives in exchange for approval of the funding, which normally costs $395. Students would only pay $95 for books.

Commissioner Lorinda Wichman, the only commissioner outside Pahrump, wanted to know how much of the services went to other areas of Nye County. Parker said the vast majority are Pahrump figures, because 82 percent of the county population lives in Pahrump, but added he has funded accounts in Tonopah.

Schinhofen said he wasn’t going to support the funding, but changed his mind after two other local boards agreed to contribute.

Wichman reminded the board the county also made a pledge to provide $10,000 to the RSVP program which provides respite for caregivers of the very ill. County Manager Pam Webster repeated the pledge during the RSVP Radiothon on KNYE radio Tuesday.

Former Pahrump Town Manager Bill Kohbarger said he worked with the RNDC for 13 years, eight years in Carlin before he came to Pahrump.

Cles Saunders said Pahrump residents have to go to Las Vegas for too many things already.

“Small business is the backbone of America. To have this expertise in Pahrump is a good thing for me,” he said. “when people start a business they have good ideas but they don’t know how to implement it.”

“This addresses the cause and the cause is we need more businesses and jobs in town,” Pahrump Town Board member Harley Kulkin said. He said it was a sign the working relationship between the town and county is getting better.

Hansen was cut off from making more comments by Borasky who advised him of Eastley’s proverbial saying.