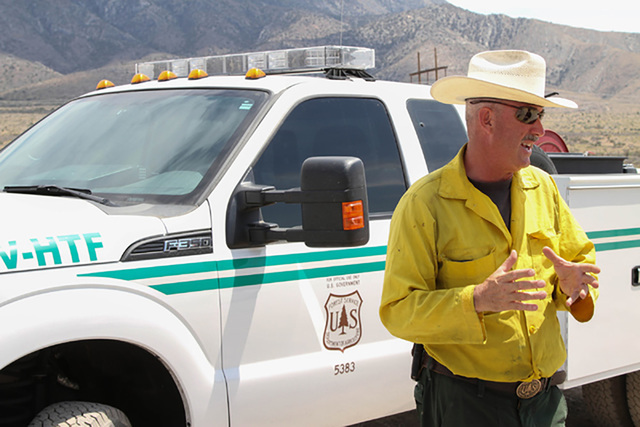 Ray Johnson, a fire prevention officer with the U.S. Forest Service, speaks to the media about the wildfire near State Route 160 and Lovell Canyon Road east of Pahrump in June. Richard Brian/Special to the Pahrump Valley Times

Nye County will take the money out of its contingency fund to help finance Wildland Fire Protection for the northern part of the county.

The inter-local contract with the Nevada Division of Forestry will cost $50,000.

“There is a conservation camp run by the forest service up in northern Nye County,” Nye County Commissioner Lorinda Wichman said. “If any community in Nye County has a fire and needs resources, needs people, we can call them, and they come out and fight the fires wherever they are, it doesn’t matter whose property it’s on.”

According to the documents, Nevada Division of Forestry will provide the services at the cost of $50,000 per fiscal year not exceeding $75,000 for the term of the contract with quarterly installments payable in advance on the first of each quarter, starting July 1 of each fiscal year.

“We’ve already signed the agreement for this year, this contract has already been signed and agreed to, but we don’t have the funding source at the time, that’s why we are back to do that. So, I would not recommend doing a contingency more than once,” Nye County Manager Pam Webster said.

In October 2015, Nye County commissioners passed the bill that repealed the chapter from Nye County abolishing the policy that restricted the use of the five special revenue funds. The original purpose of the emergency endowment fund has been deemed no longer necessary.