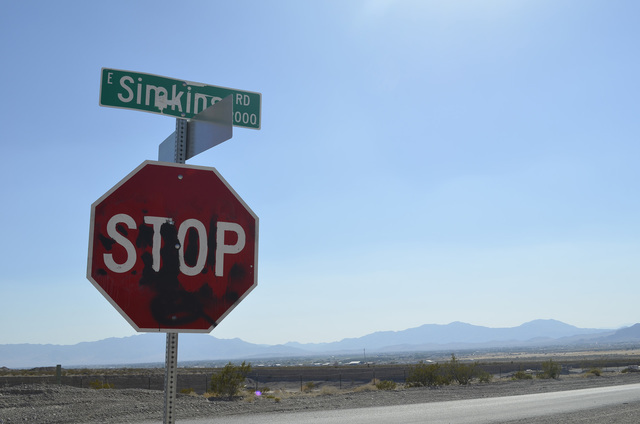 Nye County commissioners approved a agreement with Valley Electric Association, Inc. for future off-site improvements on Simkins Road where the co-op's solar plant is located. Maintenance can be deferred to a later date when the county deems them “necessary.” Daria Sokolova/Pahrump Valley Times

Under the restrictive covenant, the required road improvements to Simkins Road to the location of the VEA solar plant can be deferred to a later date when the county deems them “necessary.”

Nye County Commissioner Frank Carbone said the road was originally going to have either blacktop or chip seal, but after the agreement, the road is considered “minor.”

Roads that are neither main nor general county roads but have been established by usage, or constructed for use by the public are designated as minor county roads, Nye County Public Works Department Road Superintendent Tim Carlo said.

“This section does not require any maintenance for minor county roads,” Carlo said. “The state and the county are immune from liability for damages suffered by a person as a result of using any road designated as a minor county road.”

So far, no one has been responsible for the maintenance of the half-mile stretch from the end of the pavement of Simkins Road that leads to the VEA’s solar plant.

According to the documents, the county has determined that compliance with the off-site improvements is either “unfeasible or undesirable” at this time and should be temporarily suspended and deferred until compliance shall be deemed “feasible and desirable.”

“We have never had right of way fronting this (plant) and in an effort to get right, the developer has to grant it and the county accepts it with a road designation,” Carlo said.

The existing applicable laws, ordinances, rules and regulations of Nye County require compliance with certain off-site improvements about the proposed development, or use in association with the VEA solar power generation site, according to the documents.

Among the off-site improvements listed in the documents are 3.5 feet asphaltic concrete for 8,215 square yards, roadway base for 2,610 cubic yards and 5,280 linear feet street striping.

The county plans to maintain the section of Simkins Road between Highway 160 and Blagg Road with the proceeds from the gas tax increase, Carlo said.

The Public Works developed a list of roads in need of repairs based on the feedback that it got from several entities.