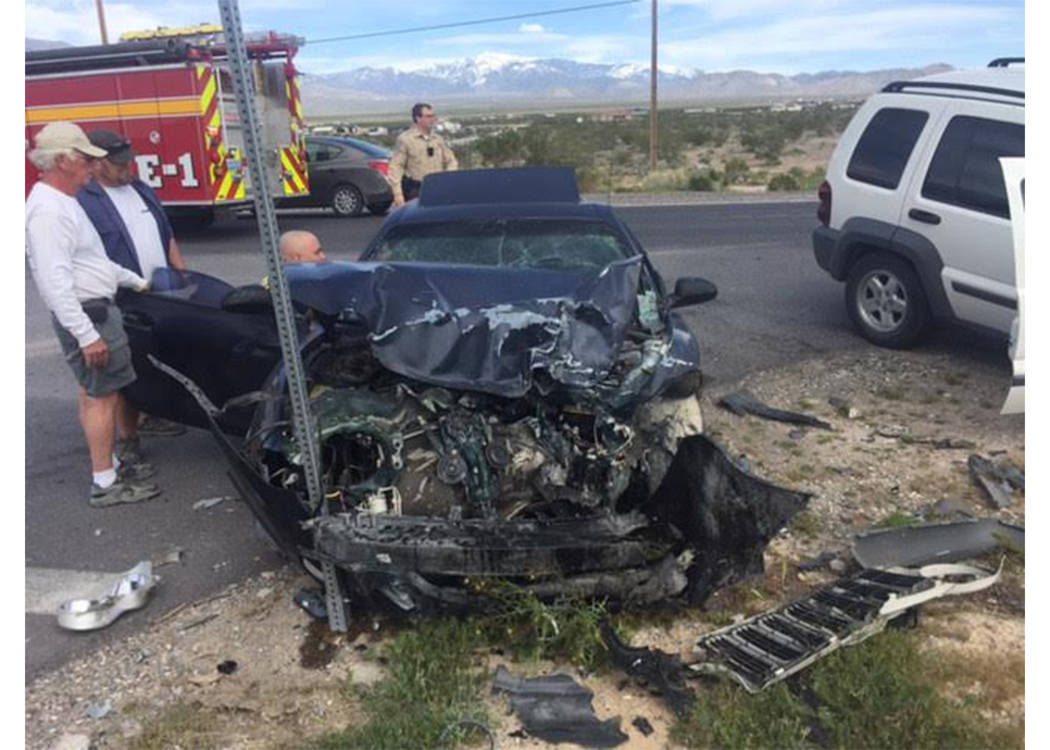 Two people were flown to UMC Trauma following a two-car head-on collision on Highway 160 near Bell Vista Avenue on Sunday. The high-impact crash caused major damage to both vehicles. The highway was shut down while traffic was diverted onto side streets as crews worked to clear the scene. Special to the Pahrump Valley Times 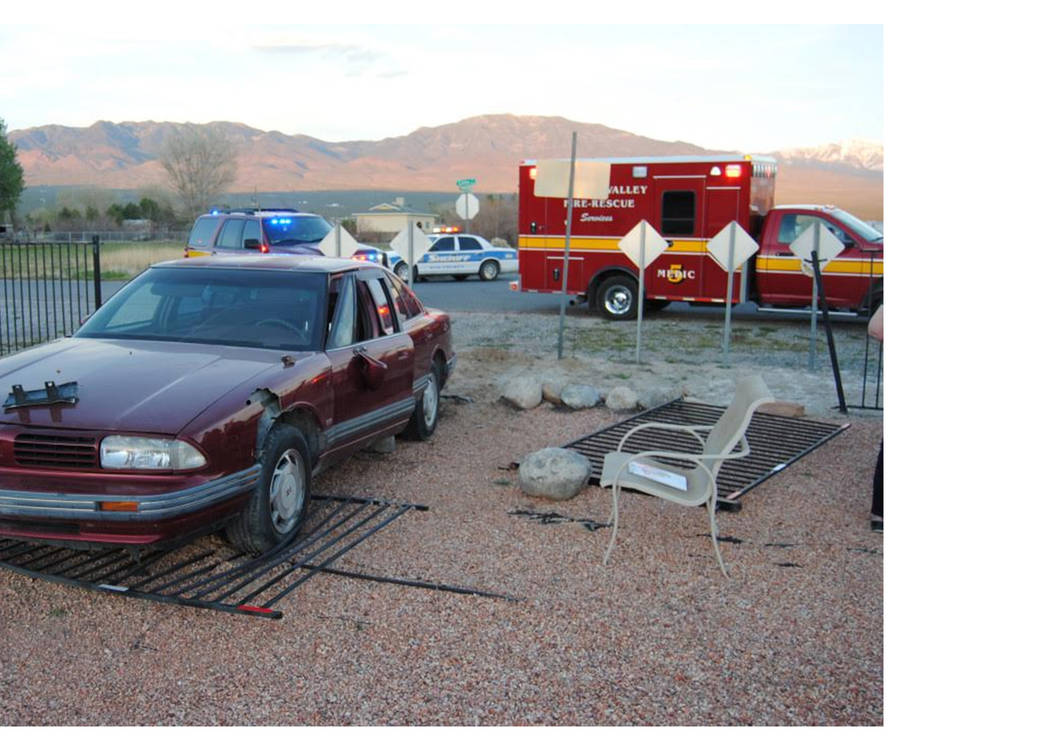 Fire crews were dispatched to the area of Highway 160 and Country Place Road for a property damage crash March 15 after the driver plowed into a wrought-iron security gate. No serious injuries were reported, but the elderly driver of the car was evaluated by EMTs. Special to the Pahrump Valley Times

Fire Chief Scott Lewis said crews were dispatched to the area of Highway 160 and Country Place Road for a property damage accident last Wednesday evening after the driver plowed into a wrought-iron security gate just after 6:30 p.m.

No injuries were reported, but one person, the driver of the car, was evaluated by EMTs.

The following day, fire crews responded to a two-vehicle collision involving a Nye County school bus in the area of Harris Farm Road and Highway 160 just before 1:30 p.m.

“Upon arrival, we found an accident with no injuries,” Lewis said. “The school district was managing the student transfer to another bus and all assignments were completed without incident.”

On Friday morning, fire crews were dispatched to the 4800 block of south Vicki Ann Road for a brush fire.

Lewis said the investigation revealed the cause of the fire was related to a power equipment failure in the area.

No injuries were reported as a result of the grounds cover fire.

“Upon arrival, we found a work crew member who was above ground in a bucket truck when a mechanical failure occurred with that apparatus,” Lewis said. “There was no egress ladder affixed to it so our tower ladder responded and extricated the sole occupant of that bucket truck. There were no injuries reported.”

On Saturday, fire crews responded to the area of Dandelion Street and Calvada Boulevard for a single-vehicle collision just after 3 a.m.

“We were dispatched for a report of a motor vehicle accident involving a car, a power pole and then a structure,” Lewis said. “Upon arrival, crews found a significant damage accident in which a vehicle had actually wrapped around a power pole on south Dandelion.”

Lewis said the vehicle just missed hitting a nearby structure after the initial impact with the pole.

“While there was no entrapment, there was one injured person, who declined to go by flight to UMC Trauma,” he said. “They were taken to the local hospital. All assignments were completed without incident.”

“Upon arrival, we found a significant impact accident involving two vehicles,” Lewis said. “Two patients were flown from the scene to UMC Trauma. If a third helicopter had been available, all three patients would’ve been flown from the scene, but the third patient was transported by ground to the local hospital with various fractures.”

On Monday this week, fire crews were dispatched to a home on the 800 block of West Indole Street for what was originally thought to be a rubbish fire just before noon.

“As we began our response for the rubbish fire, we were informed that the fire had extended to the primary dwelling, thus the assignment was paged out as a structure fire in which we added additional resources,” Lewis said.

“They found some extensions on the underside of the exterior wall and quickly extinguished it with no further extensions,” Lewis said. “The investigation revealed that apparently somebody discarded smoking materials into an outside trash receptacle placed up against the exterior wall. The winds kicked up and ignited both the trash can and contents, which extended to the dwelling. No injuries were reported.”