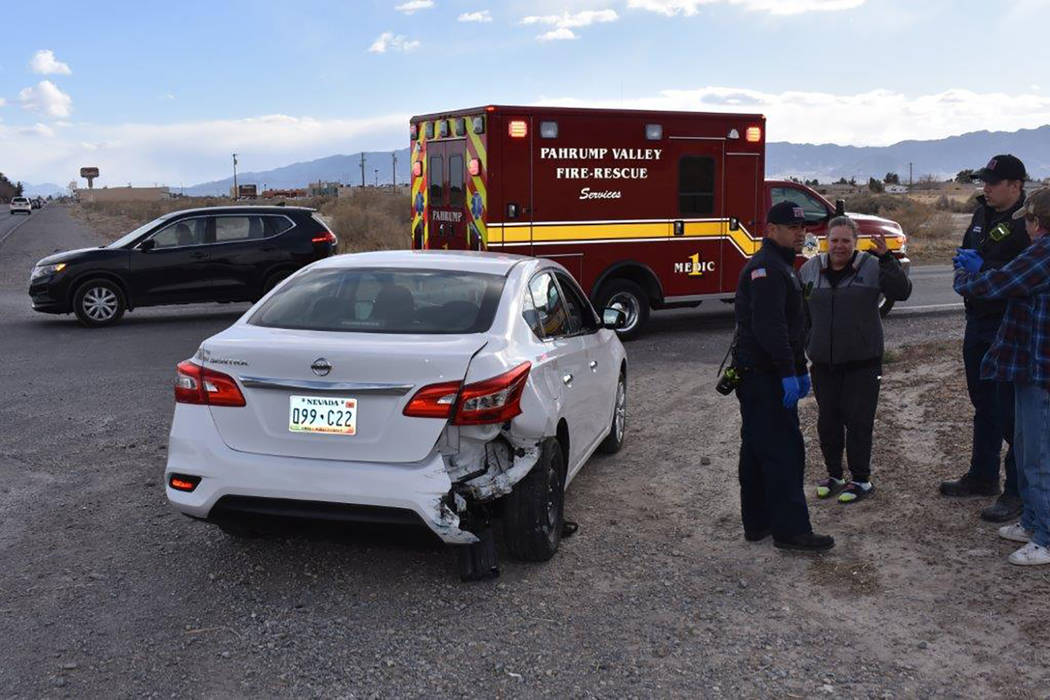 Special to the Pahrump Valley Times No serious injuries were reported following a two vehicle crash Thursday afternoon Feb. 22 along Pahrump Valley Boulevard near Calvada Boulevard. Local emergency crews arrived on scene and assessed the condition of the individuals involved, but none were transported to the hospital.

A two-vehicle crash along Highway 160 resulted in the arrest of one person earlier this week.

The incident occurred on Monday, Feb. 26, where Pahrump Valley Fire and Rescue Service crews were dispatched to the scene just north of Dandelion Street at 12:14 p.m.

“Upon arrival, crews found what was a significant impact, hit-and-run accident, where we transported the patient who remained on scene,” he said. “Shortly thereafter, we were redispatched for a report of an injury from the original accident in the area of Erie Street and Moccasin Avenue.”

Upon arrival to the updated location, Lewis said they found the second vehicle in the rear parking lot area of the Saddle West Hotel, Casino &RV Resort.

“Apparently, the hit-and-run vehicle was not able to get too far from the scene,” Lewis said. “The driver of the vehicle parked back there and there were individuals in the care and custody of the Nye County Sheriff’s Office. All of the individuals were assessed and the sheriff’s office may have taken someone into custody.”

The report of a power pole fire prompted the response of fire crews to the 600 block of south East Street on Thursday, Feb. 22, just before 5 a.m.

“We were dispatched for a report of a power pole fire in that area,” Lewis said. “The engine company arrived on location, finding the incident as reported with the top part of the power pole arcing. Crews created a safe area while awaiting the arrival of Valley Electric Association crews. There were no injuries.”

It was another earlier start to the day on Saturday as fire crews responded to a reported structure fire on the 3400 block of south Adobe Court, at 5 a.m.

“Upon arrival, fire crews found nothing showing from the exterior,” Lewis noted. “Their investigation revealed electrical arcing within the HVAC system. The fire was contained to the area of origin with no extension. There were no injuries reported.”

A visible law enforcement presence was evident at Rosemary Clarke Middle School in Pahrump, as well as other campuses throughout the county on Thursday morning.

Officials also stressed that they have no hard evidence that the post was a credible threat.

Area AT&T customers looking to make long-distance phone calls via landline could not complete their calls as dialed on Wednesday afternoon.

The 911 phone services were not affected.

During the interruption, non-emergency service calls were completed via Facebook or sheriff@co.nye.nv.us., the sheriff’s office said.