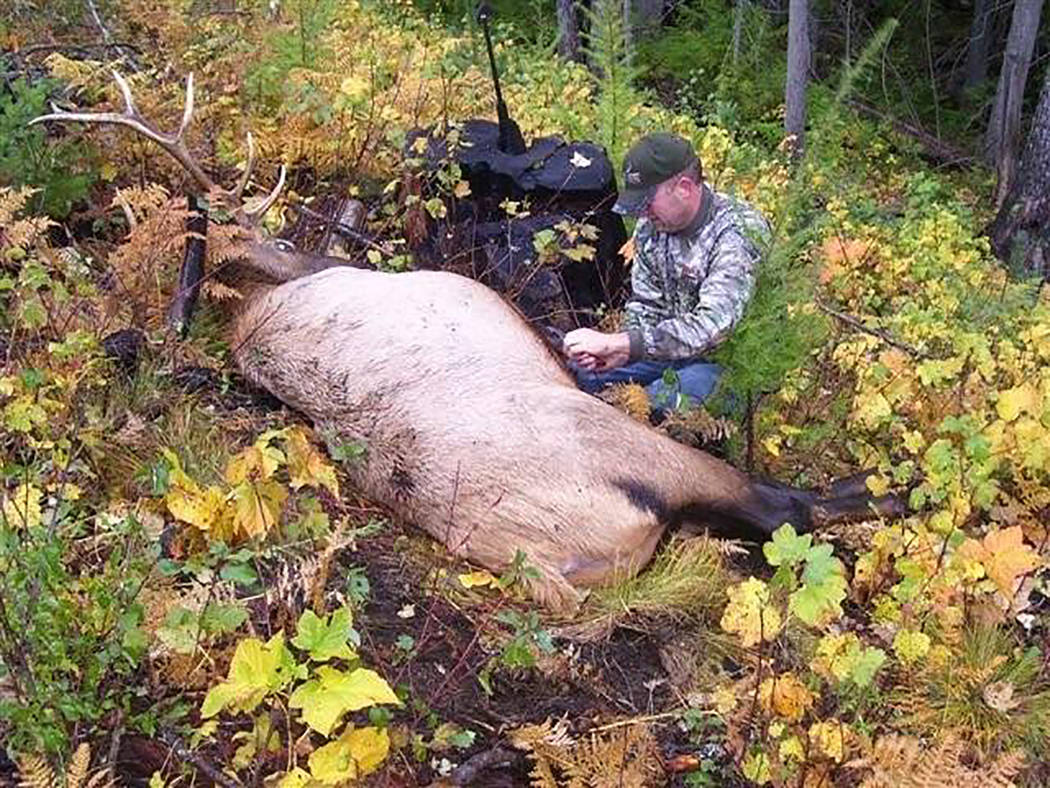 Photo provided by Dan Simmons The Marines landed and were ready for battle, as always, not with an enemy, Dan Simmons writes, but with other worthy adversaries: The mule deer, elk and moose of northern Idaho. Simmons shares a special story as Memorial Day arrives.

As we celebrate and honor our veterans this Memorial Day weekend and give a heartfelt, “Thank you for your service” to those who have returned and a “God bless” to those who didn’t.

We also celebrate the bond we share as veterans, as this story of two Marine vets illustrates.

This is their story:

The Marines landed and were ready for battle, as always; not with an enemy, but with other worthy adversaries: The mule deer, elk and moose of northern Idaho.

Their story begins with Sgt. Don Trudeau (co-owner of Saitta Trudeau Chrysler Jeep Dodge) and Corporal Larry Ardito meeting while in the Marine Corps. They served together in the 169th Helicopter Marine Light Attack Unit supporting Cobras and Hueys. The year was 1986, and their bonding and friendship continues to this day, as is often the case with soldiers who have served under the same banner.

The Marine motto “Semper Fi” translates to “Always Faithful,” and they still are. Both spent time at El Toro; Yum; and in Japan. Don gives credit to his corporal for always being on guard, both in the field and when on liberty in places like the Wagon Wheel, Polish Hand and Goodies (You Camp Pendleton boys may have heard of these places).

But, this story is about fishing and hunting and their first mission after being discharged was fishing for 25 and 30-pound blues and stripers out of Connecticut and New York (Long Island Sound). This time Larry gave the orders. He used his secret GPS coordinates to pinpoint hot spots and drift-fished with live eels and heavy weights.

He checked the drift, gave orders to crank the reel up three turns, hook-up, they had two big blues. Then it was on to the striper spot. Eels, weights and three cranks later, same results with stripers. These were the biggest fish that Sgt. Trudeau had ever caught, and remain so to this day.

Next, it was on to New York City for a tour of Ground Zero, Trinity Church (the 9/11 emergency control center) and dinner in Little Italy. This time their liberty was a bit quieter though, as they were joined by their wives.

Last year, they were on assignment once again; it was northern Idaho, Don’s backyard, and he took point. Just like the old days and as he tells it, “Larry didn’t take orders then and he hasn’t changed. He’s my buddy, but a true rebel.”

They drove to their base camp on the Lochsa River in Don’s Dodge Ram 4X4. Then it was a forced march up the mountains in search of elk. It was mission accomplished at sunset the first day with a nice 6X6 bull. On the edge of a clear cut, Don dropped him in his tracks at 300 yards with his 300 Weatherby. Then the Marines were packing as they had been trained to do.

It was then Larry’s turn. They formed an early morning scouting party and hit the trail of a nice buck on Pardee Mountain, out of the community of Kamih. Larry did the final tracking, got close and dropped it. That made it two up and two down, but there was more to come. Don’s brother-in-law, John Strombeck, a member of the Nez Perce tribe, had a permit for a Shiras moose.

Naturally, he enlisted the Marines’ help as packers and spotters. It didn’t take them long before they found one and called in the heavy artillery. John then demonstrated his equal marksmanship and it was more meat for the village freezer. It was a nice way to end the trip, but the adventure continues. These are Marine veterans and veterans of the hunt. Semper Fi.