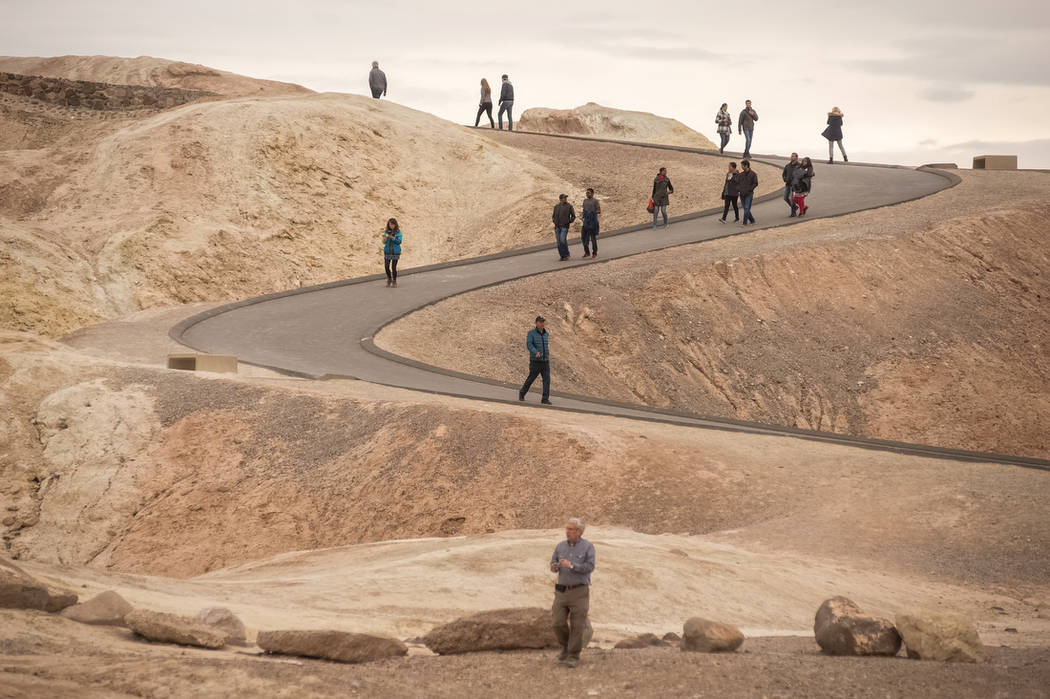 Death Valley National Park attracted a record 1,296,283 people from around the world in 2016, a 12-percent increase in visitation over 2015, park officials said in a press release. While officials attribute some of the park’s spike in visitation to last year’s superbloom, they said social media also played a role, as visitors posted photos and encouraged their friends to visit. Special to the Pahrump Valley Times

Death Valley National Park attracted a record 1,296,283 people from around the world in 2016, a 12-percent increase in visitation over 2015, park officials said in a press release.

“We noticed a lot of first-time park visitors this year,” said Mike Reynolds, superintendent of Death Valley National Park. “It’s rewarding to think that a new audience of people are experiencing and caring for our nation’s most special places.”

Officials attribute some of the park’s spike in visitation to the wildflower season last spring, known unofficially as a “superbloom.” Over 209,000 people visited the park in March, more than any other single month in the park’s history.

Last year’s number also represented a 5-percent increase over the park’s previous record of 1,227,583 visitors, which was set in 1999. Visitation dropped below one million a few years later and continued falling to a low of 704,122 visitors in 2007.

“Flowers alone don’t explain how busy the park was last spring. We attribute it to social media. Park visitors posted photos and encouraged their friends to visit. This snowballed until Death Valley’s flowers made international news.”

“Clearly the fall visitation wasn’t due to wildflowers,” Wines said. “Some of the increase was probably due to special events and publicity related to the centennial of the National Park Service in 2016.”

Visitation was up in most national parks across the nation in 2016. Death Valley National Park was one of the 20 percent of the National Park Service sites that reported new visitation records last year.

In the third consecutive year of record-setting visitation, the National Park Service welcomed nearly 331 million people in 2016, up 7.7 percent over the record that was set the year before.

“At times it was extremely challenging for park staff trying to ensure park facilities were prepared for the 200,000 additional visitors who came to Death Valley last year,” he said in a press release.

Some of last spring’s weekends saw the park’s campgrounds filled to capacity while the closest available hotel rooms were two hours away, Wines said.

“Google maps even reported delays due to traffic congestion. We’ve never experienced that in Death Valley before,” she said.

Although the bloom on the valley floor is unremarkable this year, officials encourage visitors to see the salt pan, canyons, sand dunes and mountains in the park.

Park officials also recommended advance reservations, as hotels in the park and surrounding communities can be fully booked in spring.

Furnace Creek is the only campground in the park that accepts reservations. All other campgrounds accept tourists on first-come, first-served basis.

Officials said monthly public use numbers for January and February have not yet been posted.