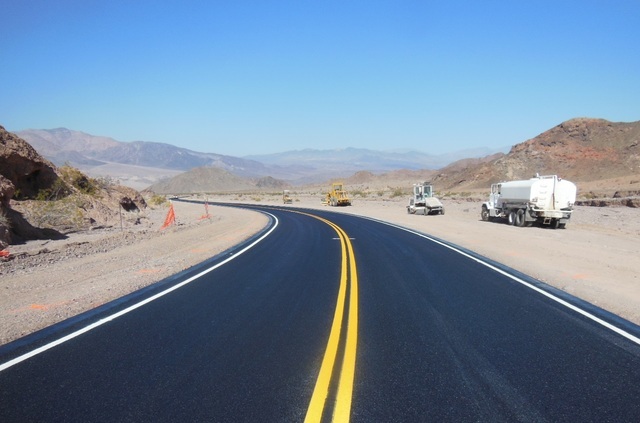 The public is invited to join in on the Jubilee Pass Jubilation Friday, beginning at 8:30 a.m. at the gravel parking lot at the junction of CA-190 and Badwater Road in Death Valley National Park. The event, which includes a ribbon cutting ceremony to symbolize the road opening, and to educate visitors about the importance of the road and what it took to reopen it after sever flooding damaged the road in October 2015. Courtesy of the National Parks Service

After being shut down for almost a year, Jubilee Pass in Death Valley National Park is set to reopen this week.

The public is invited to join in on Jubilee Pass Jubilation Friday, beginning at 8:30 a.m., at the gravel parking lot at the junction of CA-190 and Badwater Road.

The event, which includes a ribbon-cutting ceremony to symbolize the road opening, will offer an opportunity to learn about the history of Badwater Road, the work required to reopen it, and its importance to visitors and Death Valley National Park’s gateway communities.

Flash floods heavily damaged Badwater Road in October. National Park Service staff were able to clear debris off the northern 47 miles of the road to open a portion within a couple of months.

However, due to extensive missing pavement, the road base in the Jubilee Pass section was beyond the park’s ability to repair.

The Federal Highway Administration provided the funding and project management of the repair work, which was done under contract by William Kanayan Construction.

The Jubilee Pass section of Badwater Road reopened to the public on July 22, again allowing a direct route between southern Death Valley and the gateway community of Shoshone, California.

NPS said the closure created frustration among park visitors during the spring wildflower “superbloom,” which drew droves of tourists to see the floral display.

October’s storms also caused heavy damage at Scotty’s Castle in the northern end of the park and repairs to utilities at the site are underway.

Other repair work at the site will be done in phases over the next two years, with a planned reopening date for Scotty’s Castle in 2019.

The total estimated costs to repair all the damage from the flooding, including road work, is $31 million, NPS said.