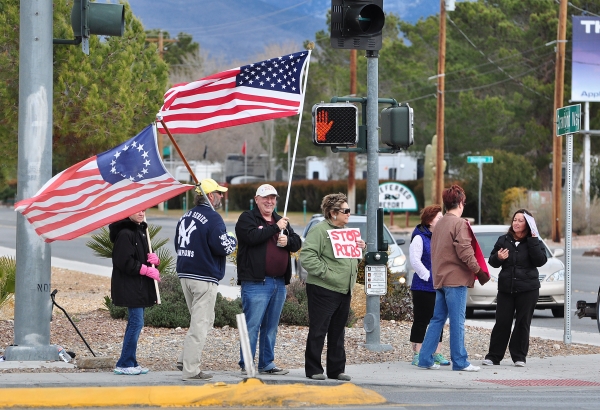 In a unanimous vote, members of the Nye County Water District Governing Board tabled the project that had created much controversy in recent weeks until further discussion “in the interest of public safety and concerns.”

“I find the information that was submitted by staff on this agenda item to be insufficient, not adequate at best,” Nye County Water Governing Board Chair Greg Dann said.

Under the permit granted by the Pahrump Regional Planning Commission a few weeks ago, UICN planned to construct two basins, or RIBs, at the former Willow Creek Golf Course by modifying existing overflow ponds located on the property for the purposes of effluent disposal, flood control and groundwater recharge.

The two conditions of approval stated that UICN will share results of all testing with the county officials and that Nye County has the option to sample the water if they decide to do so.

UICN wants to use the effluent from Wastewater Treatment Plant No. 3 for reuse or storage in various ponds on site and to send the water to Lakeview Golf Course for reuse or dispose of the effluent in the new onsite RIBs on the property.

James Eason, vice president of UICN, who spoke on behalf of UICN President Wendy Barnett said by installing RIBs, the company was hoping to fix a former problem that it had inherited during the court case when it acquired Willow Creek Golf Course, which was later renamed Discovery Park.

“We had acquired that property in order to outline the 425,000 gallons that goes to the golf course. What do we do with another 125,000 (gallons)? As soon as fix the park and we get all these permits in place, we can start putting that reuse back into the ground. There, how it has been for the last 40 years. That’s what we are trying to accomplish,” Eason said.

“The plan is for 125,000 (gallons) to go to Discovery Park, but we cannot do this right now because all the irrigation is broken. And that’s what they are in the process of doing,” he added. “The RIBs are (for) fixing those ponds in the Discovery Park.”

The effluent water that is steadily coming out from the Wastewater Treatment Plant No. 3 currently goes to Lakeview Golf Course.

The proposed RIBs have been deemed safe by NDEP and the PUCN and promoted by the Nye County Groundwater Management Advisory Committee in legal testimony and approved by the Pahrump Regional Planning Commission, according to Barnett’s letter.

Under NDEP approval, UICN would be exempt from monitoring wells.

“This is the safest project that they felt application in the state whether it’s in Washoe County, Elko County, Esmeralda County, Nye County, this is a common practice,” Eason said. “This project has been reviewed extensively by NDEP and it has to be because the last thing anyone wants to do is to contaminate the groundwater.”

Officials also said a number of RIBs already operate across the county in Beatty, Tonopah, Round Mountain and Gabbs. There are currently three RIBs in Pahrump.

“We have other RIBs in the valley already,” general manager of Nye County Water District Darrell Lacy said. “It is the standard of treatment that both NDEP and EPA and other regulatory agencies around the country have identified as a very safe and beneficial use of the water so we don’t waste that water.”

The discussion brought many frustrated Pahrump residents to the county chambers, where they expressed their safety concerns and questioned whether RIBs could cause pharmaceutical contamination of the water.

Pahrump resident Kenny Bent, who was at the helm of several well owner meetings, had recently filed an appeal to the RPC approval of the conditional use permit.

The appeal will appear on the Nye County Commission agenda within 60 days.

At the meeting on Wednesday, Bent alleged that the information presented by the UICN failed to address the conditions of the soil and calculations to the water table.

“There’s any number of things can throw the system out of balance,” he said about RIBs.

Frank Maurizio, president of the Private Well Owners Cooperative Utility of Nye County, submitted a request on behalf of the cooperative requesting that beneficial use of all water rights in Basin 162 should be addressed as an action item by the Water District Governing Board and put on their agenda at the next meeting.

“We now include a discussion of the Source Water Protection Areas in all planning approvals,” Lacy said in an email following the meeting. “The CUP at issues was for a high risk potential contaminant source which should not be placed in a wellhead protection area. This project is not in a wellhead protection area and is over Â¾ of a mile from the nearest one. There is no scientific or legal basis for staff to recommend denial.”

Eason and Tim Hafen, president of Pahrump Utility Company Inc., offered officials and residents tours at their facilities to demonstrate how RIBs work. The dates of the tours are yet to be determined.