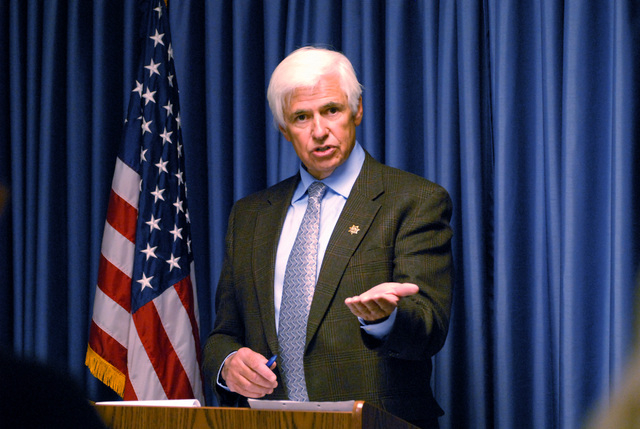 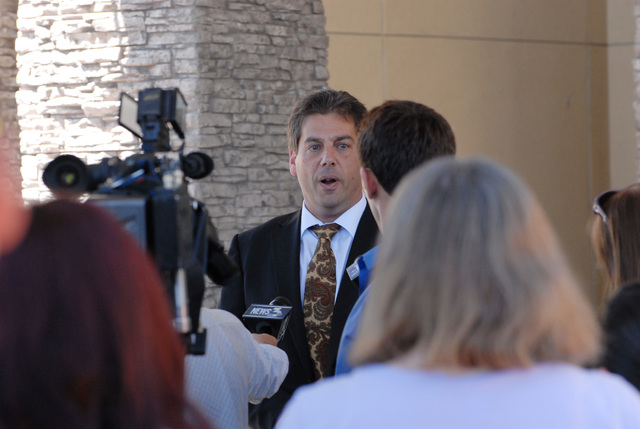 An attorney representing the Nye County Law Enforcement Association says video captured of the county’s assistant sheriff and long-time volunteer allegedly taking several political signs and their subsequent arrests may disprove some of the claims the two have made about the incident.

“You will see on the video, contrary to the claims that the occupants were in fear for their lives, or thought they were going to be shot, you will see Mr. Gulley relaxing, almost lounging against the back of the pickup truck talking to the deputies. You’ll also see a very relaxed atmosphere while the deputies were questioning Mr. Gulley and the assistant sheriff before making their determination that they did in fact have probable cause to arrest,” Adam Levine, NCLEA’s attorney, said during a press conference Thursday outside the Pahrump courthouse.

Levine said a second video, captured by Steven Lee, president of Citizens to Elect an Ethical Nye County Sheriff and the man responsible for the “Anybody but Rick” signs Assistant Sheriff Rick Marshall and NCSO volunteer Ben Gulley were accused of stealing on April 22 also allegedly shows Marshall bending down and looking both ways before picking up an “Anybody but Rick” sign and tossing it on the ground at the intersection of Blagg Road and Mesquite Avenue.

Lee handed out CDs before the press conference containing video of both the alleged theft and Marshall and Gulley’s arrests.

Levine said they hoped by releasing the video and clarifying some of the finer details of the incident they could restore faith in the NCSO deputies involved with the arrests.

When asked if the videos would support the arresting officers’ claims that Marshall resisted arrest, the attorney said the video was not shot from the best angle and may have obscured that portion of Marshall’s arrest.

When asked why portions of last week’s incident were not called out over the radio, but instead handled by cell phone, Levine replied those involved may not have wanted the assistant sheriff to hear everything they were doing over the radio system.

Although Levine acknowledged some people have questioned the number of deputies who responded to Marshall and Gulley’s traffic stop, the attorney said they were simply responding to a fellow officer’s call for backup to a crime in progress. Levine also stated they wanted to have one or more vehicles at the scene equipped with dashboard cameras to videotape the entire investigation in case parts of it were called into question.

Marshall’s attorney Josh Tomsheck said as of Thursday afternoon he had not yet seen or been provided with a copies of Lee’s videos.

He did, however, note it may explain why the arrest was handled the way it was.

“I think it gives an explanation for what transpired. Certainly there is someone in the community that has a personal vendetta against my client. You have to look no further than the fact he started a political action committee and put up signs all over the valley against my client. But what concerns me is that it’s pretty apparent that members of the sheriff’s department are taking directive from a member of the community who has a personal vendetta,” he said.

Sheriff Tony DeMeo said Wednesday he still has a number of concerns about whether it was necessary to have six deputies, some traveling at high rates of speed, respond to what amounted to a misdemeanor charge, and why a supervisor was not contacted before Marshall and Gulley were taken into custody.

DeMeo, who was on vacation on the Mediterranean Island of Malta at the time of the arrests, said he also had concerns regarding possible surveillance video turned into his office by a local store, which allegedly shows Boruchowitz meeting with Steven Lee, president of a political action committee called “Citizens to Elect an Ethical Nye County Sheriff” and the man responsible for the anti-Marshall signs which the assistant sheriff was accused of stealing, prior to Marshall’s arrest.

“I know there is surveillance video of Det. Boruchowitz talking to Mr. Lee at some store prior to (the arrest),” DeMeo said. “Someone came forward and said that it was kind of odd Det. Boruchowitz would be talking to this guy making all these anti-Rick Marshall signs. I have questions about that, and we’re going to look into it, as to whether there was enough time to contact Lt. Jarvis or contact a supervisor who was working or contact me. Understand this, where I come from that would be a notify a supervisor moment.”

The sheriff said while he knew the alleged video supposedly showed the two meeting prior to the arrest, he was unsure on exactly when the meeting took place.

Levine said Thursday, however, that he saw nothing wrong with a detective meeting an alleged victim as part of his investigation.

To help the sheriff get a clearer picture of what he would be walking into upon his return from vacation Tuesday, DeMeo had Lt. Mark Medina conduct a surface level investigation into whether there were any policy or criminal violations committed by the officers involved in Marshall and Gulley’s arrests.

“My concern as the sheriff was to address a lot of the rumors that were going on,” he said.

Based on video footage Medina and another detective were able to view, DeMeo said the lieutenant told him there did not appear to be any egregious violations of policy or the law that needed to be immediately addressed.

“What we did find out was there was a deputy looking into some signs that had gone missing. The deputy then gave that information to a detective, outside of policy,” DeMeo said. “There was a gun drawn, but the gun was not pointed at anyone in particular from what we understood from what we saw… Lt. Medina and Det. Joe Close looked at what video we have and they did not see any types of offenses occurring in the direction I gave them.”

DeMeo said there was also no indication, however, of whether or not Marshall and Gulley were given the opportunity to provide statements to officers on scene explaining their side of the story, another concern he says he has over the handling of their arrests.

In regard to his decision to place both Marshall and Det. David Boruchowitz — who was involved in Marshall’s arrest — on administrative leave over the last week, the sheriff said he wanted to ensure there was no immediate concern for the safety of the public or his office if they continued with their normal duties.

After speaking with Marshall following the incident, DeMeo said he informed Jarvis that Marshall would be reinstated, with restrictions on where he can go.

After the sheriff said Medina informed him there did not appear to be any major infractions on the detective’s part, they reinstated him to active duty Tuesday.

To avoid any conflicts of interest in the handling of this case, DeMeo said both the criminal investigation and internal investigation of the incident will be turned over to an outside agency.