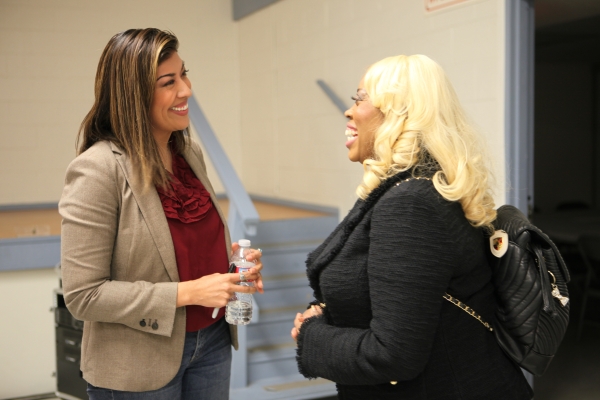 As the Democratic competition for the second largest congressional district in Nevada intensifies, candidates in the race reach out for support to many corners of the district even where they are dominated by Republicans.

Ruben Kihuen, a Nevada state senator currently serving in the 10th district, who campaigns on increasing the minimum wage to $15 an hour, equal pay and equal work for women and college affordability, said he was running for the office to “protect the American dream.”

For Kihuen, who was first elected to the state Assembly in 2006 before running for the Nevada Senate in 2010, this will be the fifth election.

Former Assemblywoman Lucy Flores is expected to challenge Kihuen in the Democrat-leaning district. Flores told the Pahrump crowd about her personal struggles and path to success in her early life and statewide experience as a state lawmaker later on.

“Because of my background and because of all of the challenges that I had and because of the fact that other people cared about me too that I was able to have the opportunity to even be here, as a lawyer, as a former elected official, I had those opportunities because people spent some time helping me and so I think it’s really, really critical to get back and to be able to do the same for others,” Flores said.

The Flores-Kihuen matchup is expected to be one of the main highlights of the race, as the two will be competing for the considerable Hispanic vote in the district.

Flores emphasized the need of investing in young people and paying attention to their issues.

“I think that one of the most important things that we can do as elected officials, as (state) representatives, is just be out there,” she said. “I talk to high schoolers, I talk to college students, I talk to young people all the time. And it’s important to talk to them about the issues that matter to them, they are tired of hearing talking points. They want someone who’s just real and who understands the issues that they are facing.”

While the conversation veered from immigration and minimum wage to gun control, crumbling infrastructure and domestic violence where candidates sometimes had a difference of opinion, all four unanimously criticized Hardy’s politics.

“I think one thing is clear: That any of us are much more qualified than Congressman Hardy to be in Congress,” Kihuen said.

Hardy took over the district in 2014 after defeating former incumbent Steven Horsford, D-Las Vegas. No Republican contenders have expressed interest in challenging Hardy.

Cliff Arnold, chair of the Nye County Democratic Party Central Committee, who hosted the event said in future years they hope to bring Nye County candidates into the race.

“We are in Republican country and we know that. And they have their candidates up and that’s what it’s about. We are going to get ours up there too. Competition is healthy,” Arnold said.

Susie Lee, a longtime community leader from Las Vegas and president of the board for the nonprofit Communities in Schools of Nevada, is the only political novice in the race. Lee named job growth, economic development, education and taking care of seniors and veterans among her top priorities.

“I think the future of this country is dependent on restoring our middle class and economic prosperity for all and I think that was reflected here. People are frustrated that what’s going on in Washington is not equating to better conditions and better future for our middle class and our working families back home and we need congress people who are going to fight for that,” she said.

Former Assembly Speaker John Oceguera pointed to his status as a fourth-generation Nevadan and spoke about his track record of community service in the Assembly and as a firefighter.

“This is a very diverse district. And if you want to be effective as a leader, as a congressman in this district, you are going to have to talk to a lot of different people,” he said, following the event. “You can’t get elected and do things that you want to do without coming out here and listening to people in this area the same as you are going to listen to them everywhere.”