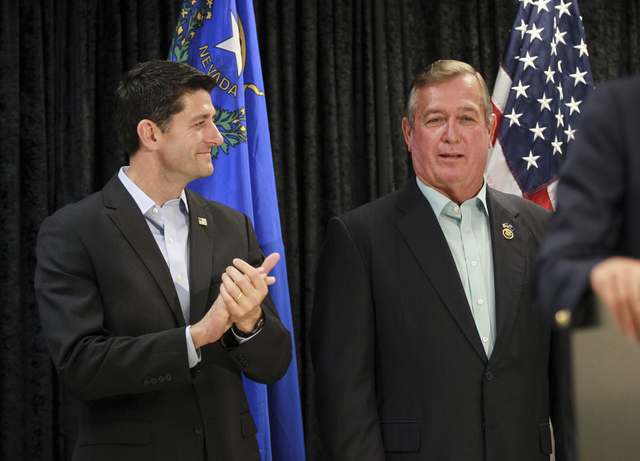 As Donald Trump and Hillary Clinton race toward the presidential finish line, their parties are battling to determine whether two of Southern Nevada’s congressional districts turn from red to blue.

The outcome on Election Day will demonstrate the reach of the Democratic machine in Nevada and will test whether having Donald Trump as the GOP presidential nominee will help its two candidates in the 3rd and 4th Congressional Districts, dampen their support or neither.

Ryan, the 2012 vice presidential nominee who ran with Mitt Romney, rallied at a North Las Vegas community center with U.S. Rep. Cresent Hardy, R-Nev., who is running for re-election in the 4th Congressional District against state Sen. Ruben Kihuen, the Democratic candidate.

Ryan is working to keep the House in GOP hands with as wide a margin as possible, regardless of what voters think of the presidential candidate atop the ticket. He’s helping Republican candidates with an eye on tight races and talking to voters about his “Better Way” policy agenda, which addresses bread-and-butter issues such as poverty and health care.

“We need to get people to the polls,” he said. “We need to win this election.”

Ryan’s Southern Nevada visits are part of a crammed October and November itinerary featuring trips to more than 20 states and more than 70 campaign events for GOP House and Senate candidates.

Ryan’s visit followed Friday’s announcement that the FBI was reviewing new emails possibly relevant to Hillary Clinton’s use of a private server while secretary of state. The emails came to light in a letter from FBI Director James Comey.

Ryan told the Las Vegas Review-Journal, “It’s too soon to say” how, or if, the news will affect down-ballot congressional races, because “no one knows what’s behind this.”

That’s about 28,395 more Democratic voters than Republican voters. Another 56,541 voters who have cast ballots are unaffiliated with a party or belong to third parties.

“We expect to see historic voter turnout across Nevada in this election,” said Stewart Boss, a spokesman for the Nevada State Democratic Party. “Our coordinated campaign, including an amazing staff of field organizers and an army of dedicated volunteers, is firing on all cylinders and mobilizing Nevadans to vote early for Democrats up and down the ticket. Right now Democrats are keeping pace with 2012 levels, but we still have a long way to go until November 8th.

“Just like it was in 2012, we expect next week to be tighter,” Boss added. “We know we’re going to see day-to-day fluctuations over the early vote period, so we can’t let our foot off the gas.”

Marlon Marshall, director of state campaigns and political engagement for Clinton’s campaign, said the mobilization aims to aid both Clinton and down-ballot races.

“We are making sure we’re helping Democrats up and down the ticket,” Marshall said Thursday in a call with reporters.

In the 4th Congressional District, Hardy unseated Democrat Steven Horsford in 2014. Horsford won in 2012 with Obama carrying the district.

Kihuen’s campaign notes the Kihuen doesn’t need a blue wave to beat Hardy and believes Hardy is a weak incumbent in a Democratic-leaning district.

But a senior adviser on Hardy’s campaign countered by pointing to polls showing the race is still tight and Republican voters’ increased use of absentee ballots and voting on Election Day.

Hardy’s campaign had knocked on 191,107 doors by Friday. Eighty volunteers were signed up to knock on doors Saturday, which will put the campaign above 200,000 door knocks.

“I think Democrats thought they had this race in the bag since Day One,” said Ross Hemminger, Hardy’s campaign manager. “This is going to be a race to the finish.”