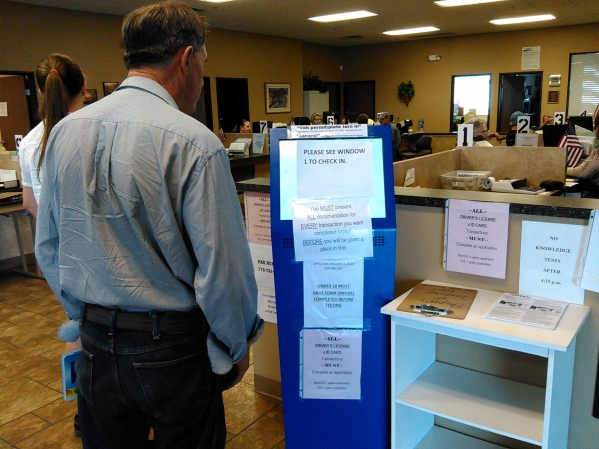 Pahrump’s DMV will continue operating the DashPass system, even though the state’s Department of Motor Vehicles offices announced it is eliminating the service in some metro areas.

DashPass was unveiled last September to ease overcrowded offices and overworked staff by sending customers text updates or call backs with an estimated wait time, eliminating the need to wait at the office.

In a three-week period from June 29 to July 17, the DMV in Las Vegas averaged in excess of 6,500 customers per day at its five metro offices. However, it was many of those customers who played a role in the system’s demise.

DMV public information officer Kevin Malone said that offices in Las Vegas and Reno have shut down the system because customers were not coming back when notified, increasing wait times for others.

However, Pahrumpâs customers use the system more efficiently.

“This does not affect the Pahrump office because the outside check-in is still available because we haven’t had the same problems that we’ve had here,” he said.

Not long after the program was implemented, customers in Las Vegas and Reno offices made appointments via the outside system, but many times failed to show or were late.

Malone said office efficiency and customer convenience were compromised as a result.

“The problem with the no-show rate is that we had employees just sitting there doing nothing while they’re waiting for people to show up,” he said. “It’s only like one minute per customer but you add that up throughout the day with several hundred no-shows and it adds up to a lot of wasted time.”

Malone said the affected DMV offices have seen an increase in productivity since the program was eliminated 10 days ago.

“We have found that just cutting out the remote access has really cut the number of those no-shows and it’s improving the wait times for everyone,” he said. “There is a very noticeable difference in the offices in Las Vegas.”

However, no direct help is on the way to trim normal wait times in Pahrump. But, new staff positions in the Las Vegas area will likely cut down wait times here.

The DMV just recently hired 93 new employees who will be trained by September to provide additional relief, according a press release. Malone said though Pahrump will not see any of the new hires, he expects the lines at the local office to eventually shrink.

He noted many people from Las Vegas visit the Pahrump office to do their business because the wait time is slightly shorter.

“You can do any transaction at any office in the state and when our wait time started going up last year, we started getting a lot of Las Vegans going to Pahrump so it should improve the waiting times in Pahrump because you won’t have so many people going there from Las Vegas.”

Malone also noted why he believes Nevada DMV offices, especially those in Las Vegas, have experienced a big increase in customer visits in recent years.

“The rebounding in the economy in the number of vehicles sold in Nevada has more than doubled since 2010,â he said. âThe population is growing at a very high level and we’ve got new people always moving into this state.”

Malone also noted the addition of new DMV programs will contribute to what he hopes will be a reduction in wait times, in addition to another new pilot program.

“The driver authorization cards, the eight-year driver’s licenses and the federal Real ID Act are in effect right now,” he said. “The agency also plans to roll out a pilot appointment system in Reno later this year. If it’s successful, the appointment system will be expanded statewide. Cutting wait times is our number one priority.”