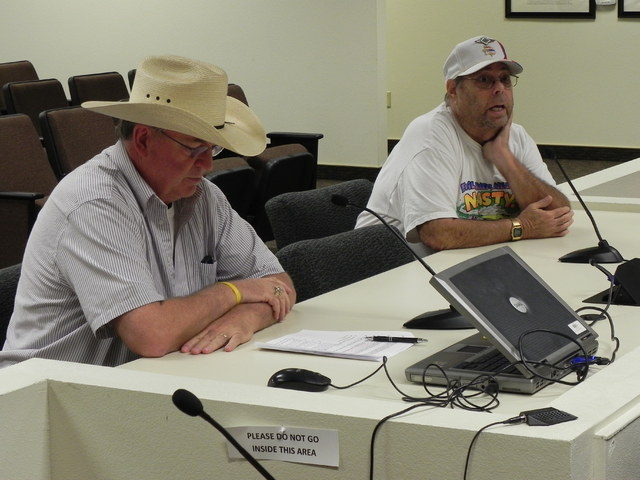 Fanning is the wife of Public Works Director Dave Fanning and has already been a county fiscal analyst, specifically in charge of grants. She was the choice of County Manager Pam Webster.

“I wish your appointee well and I think everybody should read the words in Webster’s dictionary on nepotism and cronyism,” Dolan said.

Dolan accused the county manager of lying on the agenda form by stating all applicants were interviewed. He said former Pahrump Town Manager Dave Richards applied but wasn’t interviewed.

Richard Goldstein, who joined Dolan at the microphone to complain about different commission actions at the meeting, said he grew up in Santa Ana, Calif., and never heard of California Coast University. Fanning’s resume states she graduated with honors and a Bachelor of Science in Business Administration from the university in 2013. That followed an associate degree in business management from the College of Southern Nevada in 2009.

Fanning has been a budget/fiscal analyst II since July 2010. Before that she was a human resources generalist from 2005 to 2010, she began her employment with Nye County as a clerk typist for the assessor’s office from February to May 2005.

Commissioner Lorinda Wichman made a motion to “enthusiastically approve” the appointment. It passed unanimously.

County Commissioner Donna Cox inquired about the nepotism charge, which prompted District Attorney Brian Kunzi to respond. Kunzi said nepotism is defined by law as a person hiring someone they are related to.

“Mr. Fanning, as director of public works, has nothing to do with this. Mr. Fanning is not in the chain of command of Amy. There is absolutely no merit of any argument this is a violation of Nevada’s nepotism statute,” Kunzi said.

Commissioners approved the filling of a budget/fiscal analyst to replace Fanning, as well as a deputy treasurer, deputy recorder, a sheriff’s deputy and a dispatcher.

Kunzi said the deputy treasurer will be an important position that can research properties for the annual tax sale. The county budgeted $55,621 for the position. The county will save $10,313 as the employee begins work part way into the fiscal year.

Recorder Deborah Beatty said she had to close her office at 10 a.m. on a Thursday morning a couple of weeks ago. She lobbied for another employee.

“My daughter is down having my grandbaby, I’m in Vegas and her daughter had an emergency. We had to shut the doors,” Beatty said.

She said the position won’t be just to comply with a Nevada Revised Statute requiring records dating back to 1939 to be digitized. The state law was changed to extend a 2016 deadline. Beatty said recorders office employees work on that project from 6:30 a.m. until doors open at 8 a.m. and over the lunch hour, during their four-day work week. She said the walk-in traffic is huge, adding when she was first elected she had three employees in Pahrump; now she has one.

The commission budgeted $67,193 for the deputy recorder, which would be a savings of $21,885 in the shortened budget year.

Commissioner Frank Carbone abstained from the vote on the sheriff’s dispatcher. He wants the county to hire detention officers for the jail using the half-cent sales tax proceeds. Webster said the increased sales tax raised $188,000 during the first month, on line with their projections it would raise $2.2 million for the fiscal year. Half the money is earmarked for the sheriff’s department, the other half for county fire departments.

Webster said commissioners will review a plan by Sheriff Tony DeMeo for the allocation of his office’s half of the sales tax increase at the Aug. 19 meeting.

Schinhofen inquired about whether people could be cross-trained to work in the treasurer’s, recorder’s, assessor’s offices. Shamrell said there would be a lot of training required in the different departments to bring them up to a deputy position, but the county could hire a clerk/typist or receptionist type position.