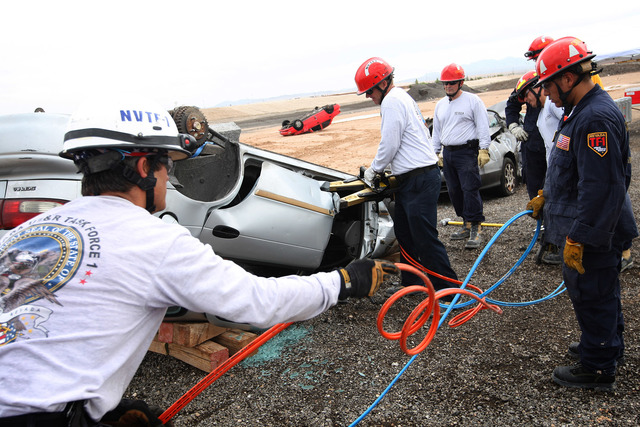 The Nevada Urban Search & Rescue Task Force during a rescue drill in 2013. FEMA-designated disaster response team will be involved in a large scale Nevada/California earthquake preparedness drill that will involve some drill activity in Pahrump. Jessica Ebelhar/Special to the Pahrump Valley Times

Don’t be startled if you see a large presence of military vehicles rolling through Pahrump next week, it is only a test.

A large-scale drill, called Vigilant Guard 17, will take place around Nevada and California, practicing emergency response to a strong earthquake.

The purpose of the drill is to exercise communications systems, damage assessment capabilities, search and rescue in a collapse setting, population migration, logistics capability, and general problem-solving for a large event.

The two-day drill, kicking off on Monday, will involve three FEMA Urban Search and Rescue teams, Nevada and California National Guard and emergency management offices throughout the region.

Tuesday, numerous military transport vehicles will pass through Pahrump performing a point of distribution drill, in cooperation with the Nevada National Guard and the Nye County Emergency Management team.

The drill will begin at the emergency management team’s buildings on Siri Lane and end at the Training Center on Mesquite Road. The purpose of the drill is to test the team’s ability to transport water, food and supplies to a location where the public can be supplied in an orderly fashion, in the case of an emergency.

The presence of official-looking vehicles will be even more noticeable in Las Vegas, especially on the north side of the city, near the speedway, where similar drills will take place on that side. Vigilant Guard 17 will conclude on Thursday, only Monday and Tuesday involve Pahrump. Remember, this is only a test.