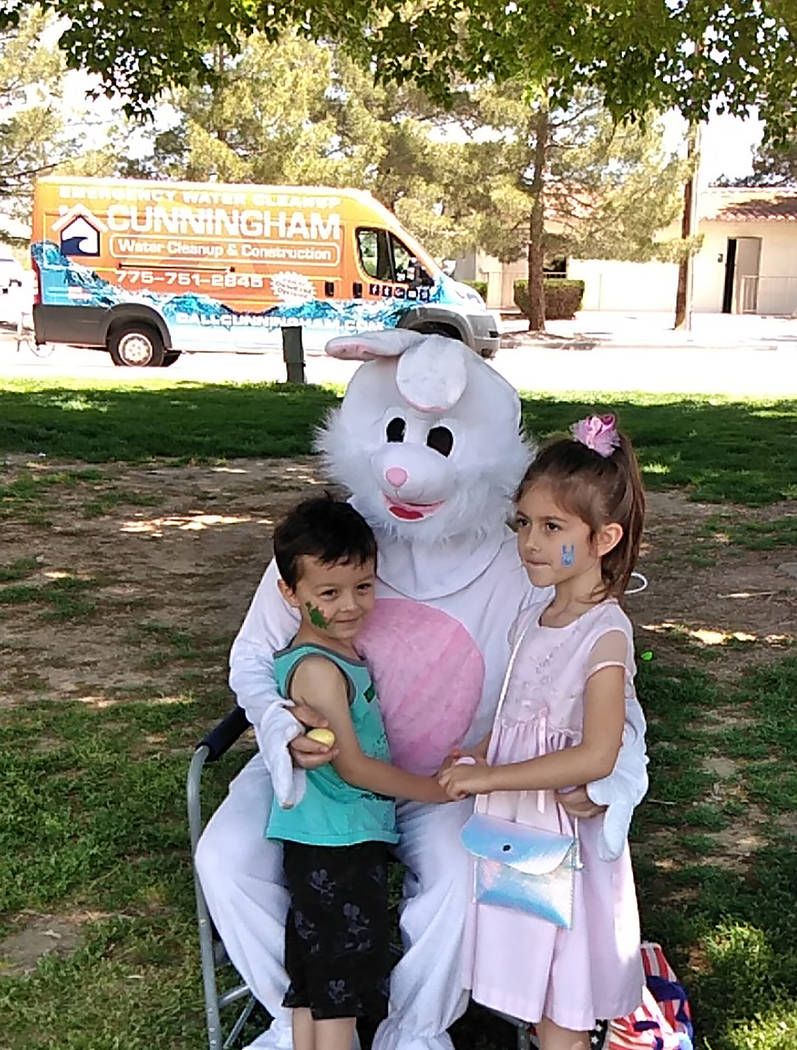 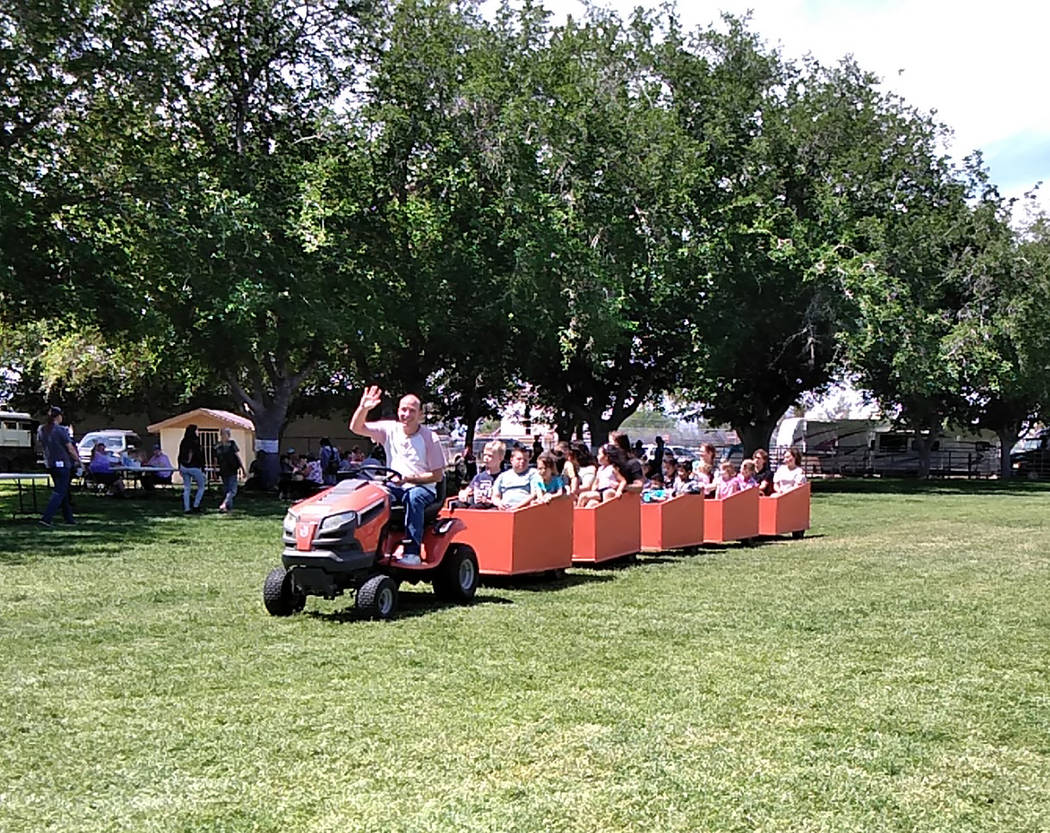 Selwyn Harris/Pahrump Valley Times Officials from the Pahrump Disability Outreach Program brought in the ever-popular "Children's Train," providing rides around the park grounds, much to the merriment of of both kids and adults. 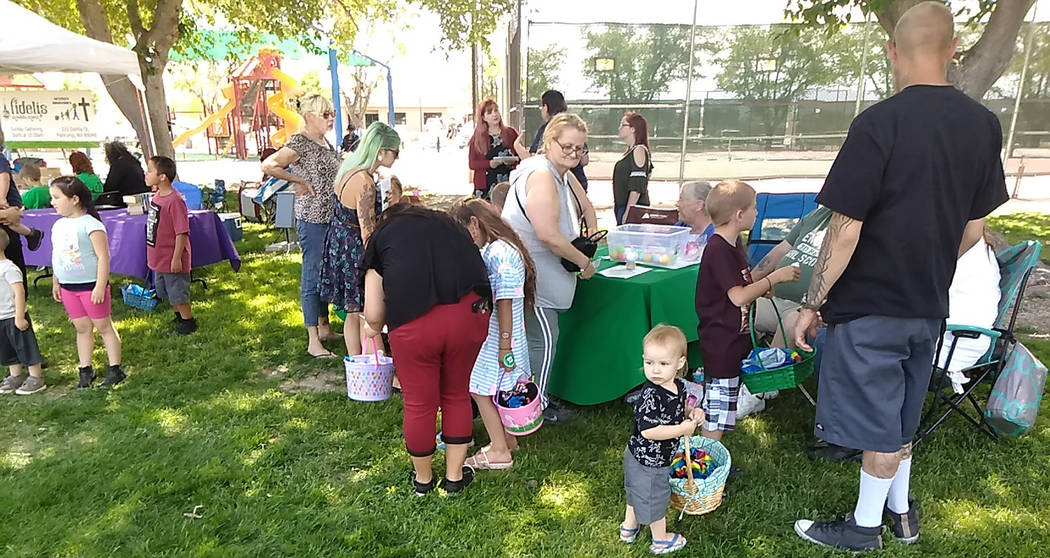 Selwyn Harris/Pahrump Valley Times The Girl Scouts of Southern Nevada was one of more than two dozen vendors who set up a booth at Petrack Park. Brandy Smith, council trainer for the organization in Pahrump, said it was the first time the organization participated in the annual event.

Boruchowitz, who is the founder of the Pahrump Disability Outreach Program, (PDOP), said the annual event attracted more than 2,000 attendees this year.

PDOP was once again a co-sponsor for the event, along with the NyE Communities Coalition’s Holiday Task Force.

“We handed out almost 7,000 eggs, which is unheard of, so things are going great,” he said on Saturday. “This year we did not coincide with spring break, so I think we’re doing a little better because some families travel out of town during spring break. We’re almost out of food and we’re almost out of eggs, and that’s a good problem to have. We probably had about 2,000 to 3,000 thousand people out here today.”

“Today was fantastic, we had a great turnout and the kids really enjoyed themselves,” she said. “We had a lot of organizations that came out and set up vendor booths, and of course we had the Easter Bunny here.”

Wright also spoke about a brand new addition to the annual celebration.

“The Fun Zone kind of started out a bit slow, but I went over and noticed that the kids were very much enjoying it,” she said. “We had several games in the Fun Zone, and the kids took to it quite well. We didn’t know that we would have a monster truck here at the park, but they were getting set up for the monster truck show this evening and they brought one over so the kids could check it out. It was great.”

Upward of 25 vendors participated in the event, which featured what’s known as an “Egg Scramble,” where kids would drop by each booth, to get an egg filled with sweet treats.

One such booth was that of Brandy Smith, council trainer for the Girl Scouts of Southern Nevada in Pahrump.

“It’s been really, really busy today,” Smith said. “It’s been great and there’s been a lot of kids coming by who are interested in the Girl Scouts.”

Though the Girl Scouts have been established in the Pahrump community for several years, Smith noted that 2019 marked the first year the organization opted to become a vendor.

“Erica Johnston from RNG Farms is one of our Girl Scout leaders,” Smith said. “She asked if I would like to put up a booth to recruit Girl Scouts and I told her that I would absolutely be there. We have 11 troops in the Pahrump area so we have been very busy. The age range is from kindergarten through the 12th grade.”

The train kept a rolling

Meanwhile, Boruchowitz said that throughout the day, both parents and their children enjoyed a brisk jaunt around the park in what’s known as the new and improved “Children’s Train.”

“We normally use it for PDOP’s annual “Pumpkin Days,” but we figured we would debut it here,” he said. “Operations at PDOP doing great. We are getting ready for Pumpkin Days coming up, which will be our 10-year anniversary. We’re going to do something big, but we haven’t quite decided on all of the particulars. Next month we will be announcing our 10-year anniversary package for the community.”