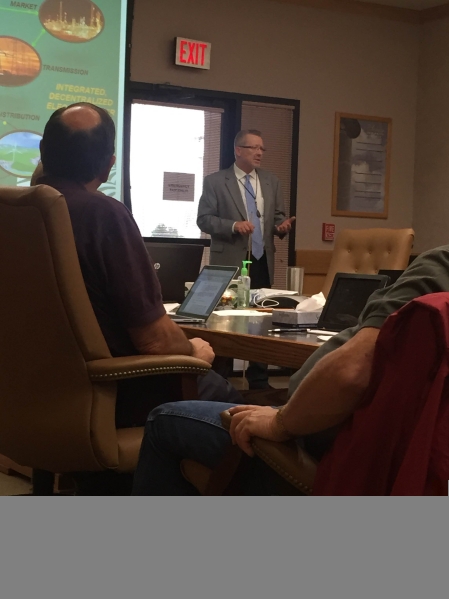 The planned electric charging station planned for Beatty has an official home, Valley Electric Association, Inc. announced at its monthly board of directors meeting Monday.

In addition, Brooks said that they are in talks with a big-name electric car maker to install another charging station next to the co-op’s planned station.

“We are in talks right now with Tesla to see if they will come in at the same time,” he said. “They had planned on potentially putting one there, and this might help them build at the same time.”

Sandoval announced the initiative at a news conference last month, which will install charging stations in key rural areas in the state along the U.S. Highway 95 corridor between the two largest cities in Nevada, Las Vegas and Reno.

Now residents that have solar panels, like rooftop ones, can participate in the wholesale energy market for the first time. This will allow smaller resources to be bundled together by utilities or third parties so that they collectively meet the half-megawatt minimum requirement for participating in the energy market.

“Say for instance somebody on the edge of town wanted to build a large subdivision and everything had solar on it,” Husted said. “All those homeowners, or the owners of those particular solar panels â¦ to come together and put that resource into the market just like a generator.”

“I see this as a win-win for the whole region,” VEA board member Dave Dawson added.

In addition to rooftop solar and energy storage, plug-in electric vehicles and demand response are at the forefront of the distributed energy revolution in which consumers can use and sell power, the California ISO press release stated. The ISO said it recognizes that distributed energy resources are growing and are an important aspect of the future resource mix.

VEA also announced the write-off of second quarter bad debt, which included 37 accounts and one property damage bill. The total write-off amounted to $29,886 that can be used for recovery of future capital credit.