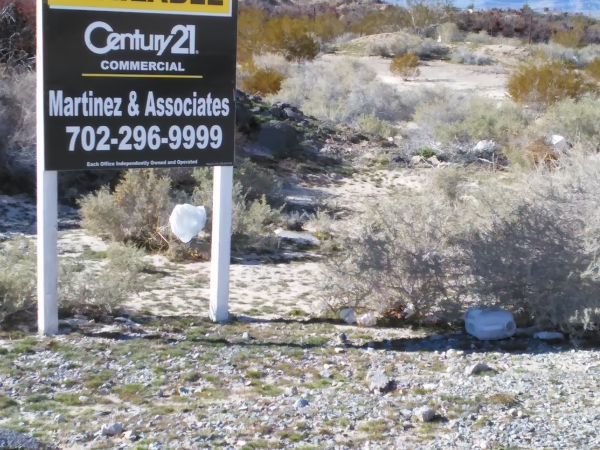 Local television personality Deanna O’Donnell is trying to use her profile to get area residents to “help clean up Pahrump.”

Dubbed “Let’s Clean up Pahrump,” the event kicks off this Saturday, Feb. 20, at the Bob Ruud Community Center beginning at 9 a.m.

O’Donnell, news director of KPVM News 46, is organizing the event with

She said the idea came about following a recent incident in front of her residence.

“A lot of people take their trash to the dump and one day somebody had lost some of their load in front of my house,” she said. “I went to get my own trash can and clean it up. I asked my son if he could help and he asked me why should we clean up their trash and I told him who else would?”

After clearing the abandoned trash, O’Donnell said she began to think about encouraging others in the community to do the same.

“My mother is a real estate agent and she tells me how hard it is to sell homes if the neighborhood looks trashy,” she said. “There’s a lot of problems selling property because of the conditions next door or across the street. We then realized that many are older, disabled people who can’t physically clean up their yards or the area around their yards.”

O’Donnell also made sure to note the neighborhood cleanup effort is not related to the annual Pahrump Town Cleanup, occurring each April.

“I think there’s enough trash for both a town and a neighborhood cleanup,” she said with a laugh. “We want this to be a positive thing so we’re giving folks the opportunity to participate. That’s all we’re doing. If they want to do it, we would really appreciate it, but if they don’t, that’s no problem. If they need help, we have many people that want to help. This is for neighborhoods, while the town cleanup usually covers the highways and main roadways.”

Both O’Donnell and Coblentz are receiving support for the effort, as a Nye County commissioner and a member of the Legislature are also supporting the neighborhood cleanup, along with several area agencies and businesses.

She noted many volunteers have also expressed interest.

“Assemblyman James Oscarson is sponsoring the trash bins. We are going to put bins around the neighborhoods that we are focusing on for that particular month,” she said. “(Nye County) Commissioner Frank Carbone is involved, as well as the Disabled American Veterans and Pahrump Kiwanis Club.”

O’Donnell said plans are underway to plan the logistics of the cleanup scheduled to begin next week.

“We were thinking about splitting up the town into at least 12 sections and each month, a different section would get done,” she said. “People can choose to participate or not, because we are just giving them the opportunity to do so. We are also going to provide water, trash bags, safety vests and other items.”

The first cleanup, O’Donnell said, will focus on areas near and around Petrack Park, just prior to the Third Annual Pahrump Hot Air Balloon Festival.

“We bring in so many people from out of town with that event,” she said. “When the people fly in the balloons above our town, they will notice the area and what kind of condition it is in. Basin Avenue tends to have a lot of garbage strewn about, as well as Mesquite Road. We are hoping to get those areas cleaned first. Valley Electric Association said they have volunteer ambassadors lined up.”

Coblentz said the focus will be on areas in and around neighborhoods.

“We won’t be going on people’s property to do this, but if they need help, there are drug court volunteers to help people clean up their own property,” he said.

Additionally, Coblentz said the initial effort will determine how much interest there is among area residents.

“This is a test run and it’s designed to see what kind of response we can get from promoting it and pushing it and seeing how the people will react,” he said. “If we get a great turnout and we get those bins filled really fast, we are just going to grow and expand. You can call this a big social experiment.”

When the interest does expand, Coblentz said other neighborhoods can form their own respective neighborhood cleanup project.

“People in various neighborhoods can create their own committees to encourage other people to participate if they want to participate,” he said.

O’Donnell noted the effort will be an ongoing one throughout the year.

“We are looking at every month, and with the help of local business Quality Signs, we have permanent signs that are going to be made so we can identify which neighborhoods are participating,” she said. “We will also keep up with the commercials on radio and TV to tell residents which areas that we’re cleaning up.”

For additional information call 775 537-0250. O’Donnell emphasized this is a personal effort and is not being sponsored by the television station.