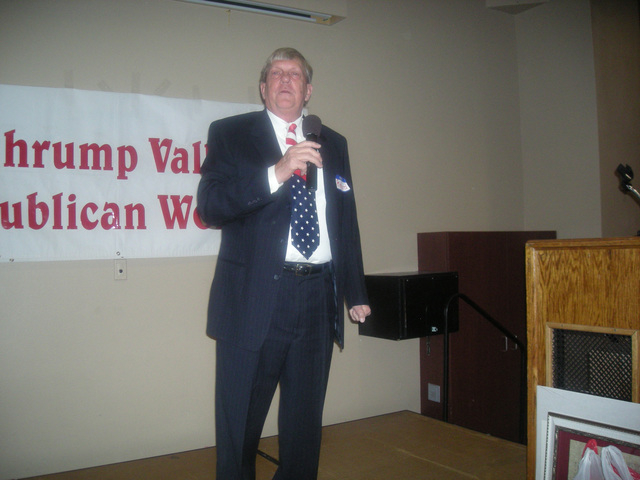 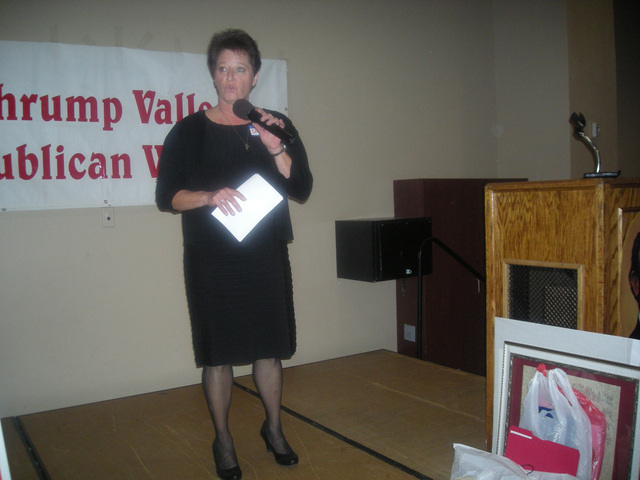 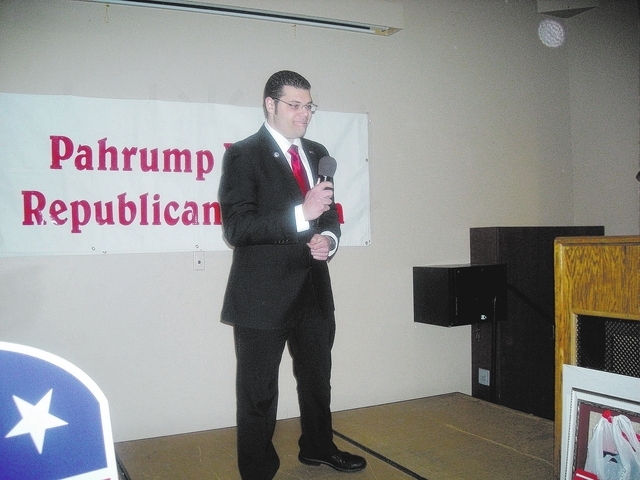 Sheree Stringer, a personal property appraiser/collections clerk at the assessor’s office is running for her boss’s position, along with Richard Marshall, who was an appraiser for the city of Virginia Beach, Va., for 31 years and Carmelo’s Restaurant owner Leonardo Blundo. They join Dave Roberts, lead race instructor for Exotics Racing at Las Vegas Motor Speedway, who announced his candidacy early.

Embattled Nye County Assessor Shirley Matson announced on a television talk show she plans to seek reelection to a second term. Matson was fined by the Nevada Ethics Commission after negative emails surfaced in March 2011 about Hispanic-looking workers at the new county jail project. She was also reprimanded by the Nye County Commission. District Attorney Brian Kunzi blocked her attempts to fire two employees. Last October, the FBI raided Matson’s office, confiscating two computers after allegations surfaced she may have tampered with a package that went through her office, which served as a county mail depository. County mail no longer goes through her office.

But in an interview kicking off her campaign, Stringer refused to criticize Matson.

Stringer has lived in Pahrump 38 years. She began working for the Nye County assessor’s office as a clerk in 2003, working her way up from data clerk to her current position, doing collections for personal property, which includes mobile homes, aircraft, billboards and equipment. She received her personal property appraiser certificate in 2009, then a general appraiser certificate in 2011 but added it will still be a learning process if she’s elected assessor, requiring some continuing education.

Before the assessor’s office, Stringer was a teller at Bank of America where she was instrumental in bringing the Relay for Life event to Pahrump in 1998. Stringer and her late husband also owned Desert Pump Service and Supply from 1995 to 2007. She plays softball and her family races at the Pahrump and Tonopah speedways.

Her prepared speech for the Lincoln Day dinner states: “I am not only ethical, but I am honest and I have integrity. I want people to see me for who I am. I am a strong woman with strong leadership skills. I am a team player who isn’t afraid to do any job I am asked to do. I have strong communication and customer service skills in which I am capable of multitasking and possess the ability to stay organized and on task in such a manner that I can complete any task for me, when given the opportunity.”

When asked why she’s running for office this year, Stringer told the Pahrump Valley Times, “I think there just needs to be a change. There needs to be a change in leadership and the way the assessor’s office is going. Taxpayers need to know that we are doing our job and that we are doing it correctly to the letter of the law and we’re not singling out people. So we just need to get back to that open door policy where taxpayers are not afraid to walk through the front door, that they can come in and find out about their assessments.”

Stringer said the assessor’s office is basically governed by the Nevada Department of Taxation, under Nevada Revised Statutes Chapter 361. “When I first told a few people I was going to run for the assessor’s position they said good, you can lower my taxes. No I can’t,” she said.

Marshall retired in 2005 and moved to Pahrump, where he had moved up to an appraiser three position for the city of Virginia Beach, second only to the assessor. He did residential appraisals for 14 years and then commercial appraisals for 17 years.

In Pahrump, Marshall served a four-year term on the Nye County Board of Equalization, took a year off, then was reappointed to a second term last year, experience he said also prepares him for the assessor’s job. He also worked at the Saddle West Hotel and Casino doing the gaming audit, then accounts payable and payroll until a year and a half ago. Marshall has a bachelors degree from Virginia Wesleyan College and took graduate courses at Old Dominion University.

“I did extensive interactions with homeowners, property tax representatives and of course various municipal departments regarding any factor that would affect property values,” Marshall said of his career. “On many occasions I took my sales data maps to customer’s kitchen tables to explain the sales that were occurring in their area and basically took the time to explain how the process works because it affects their pocketbook.”

Marshall said if he knew former assessor Sandra Musselman would take the early retirement buyout he would’ve run for assessor then. Mussselman defeated Kathy Bienenstein in the 2010 Democratic primary, then took the buyout but was too late to be removed from the ballot. Musselman still ended up with 6,028 votes, 43 percent, in her loss to Matson, who had 7,984 votes, almost 57 percent of the tally, in the November general election.

“There’s a real difference between an auto mechanic and an airplane mechanic. There’s a real difference between a realtor and a real estate appraiser and the current assessor was formerly a realtor,” he said. “The citizens of Nye County deserve to have a real estate assessor ready to serve all citizens and an office environment free of controversies.

“As far as I know the office does a very good job. I believe everybody there is qualified to be doing what they’re doing with the exception of the assessor,” Marshall said. He believes 100 percent in being open to the public.

“I’m more than willing to explain any procedures that we use and have used and how your value was arrived at.”

In his dinner speech, Blundo said he represents ideals like leadership, integrity, transparency, efficiency and hard work ethics. “As a successful business owner in the community, seven years and strong, I wish to carry these qualities with not just my patrons, but everyone in this room and everyone in this county,” he said.

Blundo’s parents retired in Pahrump 20 years ago. He has owned Carmelo’s Bistro for seven years, even after attending real estate school. He is a member of Kiwanis, the Salvation Army board, Moose Lodge, Elks Lodge and an AYSO soccer coach.

“Government is a service business, like the restaurant business is. Your job is to serve the public. Owning and managing the restaurant requires similar leadership and personnel skills that running the assessor’s office requires,” Blundo said when asked his qualifications for the office. “Saving the taxpayers money by increasing office efficiency, improving transparency and addressing the concerns of the public are areas of importance.”

“One of my goals as assessor will be to keep my office out of the newspaper, except for the public notices that we have to publish.”