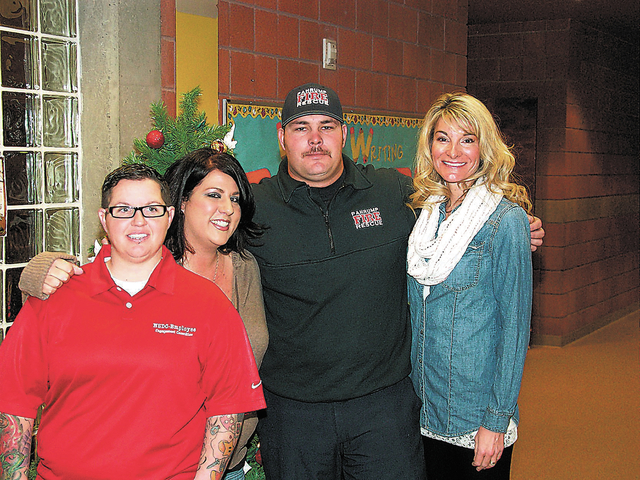 It’s official, the holiday season is now in full swing and many local organizations are gearing up to make this Christmas a memorable one for area families.

The Angel Tree attempts to bring joy to children and families who are less fortunate.

She said the “wish lists” are much longer than she has seen in previous years.

“We have trees at Floyd Elementary, J.G. Johnson and Rosemary Clarke Middle School. I am a little stressed out with the numbers that are on the trees. J.G. Johnson has about 100 angels placed on their tree and Hafen is about at 60. It just goes to show how many people need assistance during the holiday season. Outside of that, we are super excited and we have so much help from the community, that I know these kids will have something to unwrap on Christmas morning,” she said.

Excited anticipation is one thing, but reality is entirely different as not all of the angels are selected by participants.

In that case Lopez said she will actually purchase the gifts herself.

“The angels that don’t get chosen from the community, Dustin Knutson and I will go and pick all of them and make sure every angel is chosen and every kid has a gift,” she said.

The process is simple enough.

Anyone can pull an angel off the tree and make good on the request written on the paper figure.

Lopez said she has noticed that toys don’t seem to be a priority on the lists this year.

“I have kids at Hafen alone just asking for socks and underwear which are really things that we normally take for granted. You just pick the angel and purchase the things they ask for. We put three items on the list and some people purchase one, others purchase all three or more. You wrap the item and attach the angel to it and I will hand them out by the 18th,” she said.

As far as toys are concerned, Lopez said there is one ‘hot item’ that is especially popular among young girls in town.

“This year the trend seems to be “’Hello Kitty” and “Monster High” which are not very expensive. We went shopping this week for about 76 kids and we bought well over 200 items for less than $1,500. We made sure those kids had two or three gifts each. The boys are into “Ninja Turtles,” scooters and toy cars,” she said

Lopez also noted that one youngster who was mature beyond his years, had something different in mind for Christmas.

His request had to do with a family member.

“I had a little boy ask for something for mother and that’s all he wanted. He saw me at Hafen and told me that he didn’t want his name on an angel tree, but he wanted to have something for his mother and I cried. I get emotional because I hope the next generation of kids will grow up and do the same things,” she said.

Since Lopez announced the angel tree event, she has been on her cell phone almost non-stop this week fielding calls both from those who want to make donations and others who put in requests for the angel tree.

“I have answered about 75 calls just today. When I checked my home voicemail, I had 14 missed calls in a matter of two hours. This endeavor takes a lot of effort and organization and help from the community. I have said many times that if we didn’t have the support from local businesses and generous individuals with big hearts, this program would not thrive,” she said.

Lopez said she is hoping an upcoming “Santa Shop,” which was formally a toy drive event, should also help bring in additional joy to local kids next month on the 14th.

“Anybody can bring their kids to see Santa. They can take pictures with Santa and it’s free. In the past, our toy drive would encourage people to come by with an unwrapped toy and we would deliver it. This year kids can get the toys that day so we won’t have to deliver. We’re not just hitting 30 families, we are hoping to hit the entire community,” she said.

Lopez also requested that families who don’t really need assistance with Christmas gifts, give other families an opportunity to enjoy the event.

“We do want to reach every family that needs help but with that said, if they are with another local organization, we would urge them to try and stay with that organization so we can reach out to the families that are truly in need of assistance,” she said.

Lopez and her legion of volunteers have been making wishes come true for more than four years in the community.

She said she will do her best to continue the effort for future holidays.

“The very first year was kind of small but progressively it has gotten bigger. This year we added another school and facility like Maplestar. This year we have about 200 more kids compared to last year. Even if we had 30,000 kids, I would find a way to have every child open up a gift on Christmas morning,” she said.

The entire community is invited to the official decorating party on Dec. 7, with the lighting ceremony taking place the following day at 6 p.m.

The event will include a visit from Mr. and Mrs. Claus along with coffee, hot chocolate and cookies for all.