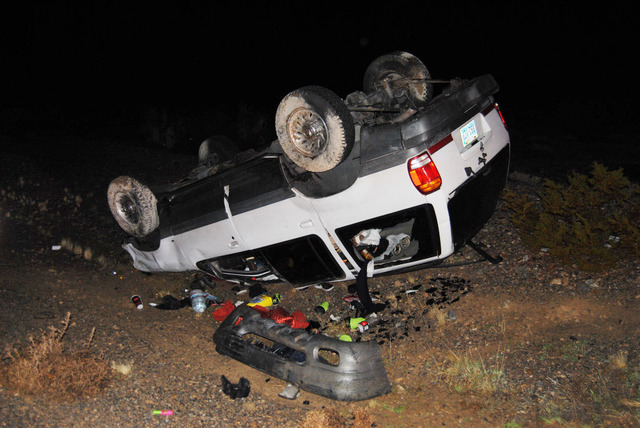 The occupants of a vehicle involved in a rollover crash declined medical treatment late Saturday evening. The incident occurred on South Highway 160 just after 10 p.m. NHP is investigating the cause of the crash. Special to the Pahrump Valley Times 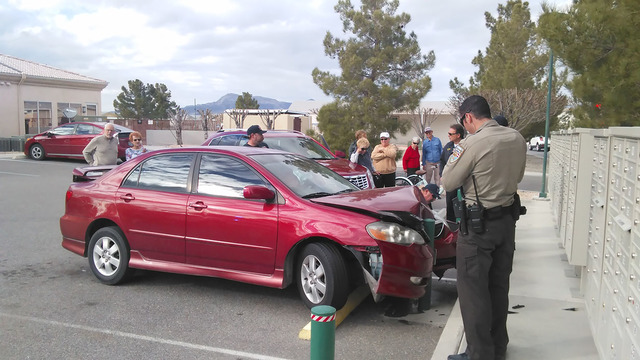 A Desert Greens resident was examined by Pahrump Valley Fire and Rescue medical crew after hitting a barrier in the retirement community Feb. 7. The unidentified driver claimed her foot became ensnared in the pedals as she was attempting to park. The woman, who was transported to Desert View Hospital, is expected to recover from her injuries. Selwyn Harris / Pahrump Valley Times

A series of motor vehicle collisions and structure fires made for a busy start of the month for area first responders.

“It was initially thought there might be an entrapment of the driver because there was an indication that the driver’s feet may have become stuck with the pedals,” Lewis noted. “The vehicle struck a fixed object. There was no entrapment, however, there was an injury which required transport to the local hospital.”

The exact cause of the crash is under investigation, Lewis said.

The following morning, fire crews were summoned to the intersection of North Linda Street and Mesquite Avenue for a report of an injury crash just after 8 a.m.

“Upon arrival, we found a one-vehicle accident involving a motorcycle, where the rider was still on the ground,” Lewis said. “We assessed the patient and found injuries consistent with a transport to a trauma center. Mercy Air 21 landed on scene where patient care was transferred and that patient was in fact, flown to UMC Trauma in Las Vegas.”

Later that morning, crews were dispatched to a mutual aid assignment for a vehicle fire on Highway 160 at mile marker 36, where Nye and Clark county crews extinguished an engine compartment fire in short order.

Fire crews encountered yet another vehicle crash along Highway 160 near Betty Street just before 2 p.m.

Upon arrival, crews found a motorcyclist was involved in a crash.

Lewis said though the rider appeared to have been shaken up, he refused to be transported medically.

“We were dispatched for a mutual aid assignment to Inyo County, California for a recreational vehicle fire on Old Spanish Trail Road,” Lewis said. “Upon arrival, crews found a mostly consumed fire that was easily extinguished with no extensions. Inyo crews arrived a short time later where the scene was turned over to them and we returned without incident.”

On Saturday, fire crews were dispatched to the area of Bell Vista and Ash Meadows roads for a rollover crash just after 2 p.m.

Upon arrival, crews found the occupants of the vehicle had self-extricated and refused medical treatment.

Later that evening, Lewis said crews were summoned to Highway 160 for a rollover crash at 8:10 p.m.

“We were dispatched for a mutual aid assignment to Clark County at mile marker 39 for a one-vehicle rollover accident,” Lewis said. “Upon arrival, we found two occupants within the same vehicle, including in infant. All occupants met flight criteria, however, Mercy Air was unavailable due to weather conditions. Our crews transported the patients to Las Vegas via ground.”

Less than two hours later, fire crews were again dispatched to Highway 160 for a report of an injury crash just after 10 p.m.

“Upon arrival, we found a three-vehicle accident where one vehicle had fled the scene,” Lewis said. “One vehicle was overturned resting on its roof and the investigation revealed that no occupants were in the overturned vehicle, however, we later learned that all occupants of both vehicles were located at another location. Both showed signs of injury but declined medical transport.”

A home heating unit is believed to be the cause of a structure fire on Monday, Feb. 13, just after 1 a.m.

“We were dispatched for a report of a possible structure fire on the 5600 block of South Bonnie Street,” Lewis said. “Upon arrival, we found a malfunctioning heating unit that was quickly extinguished. There was no extension to the primary dwelling and no further fire department services were required.”