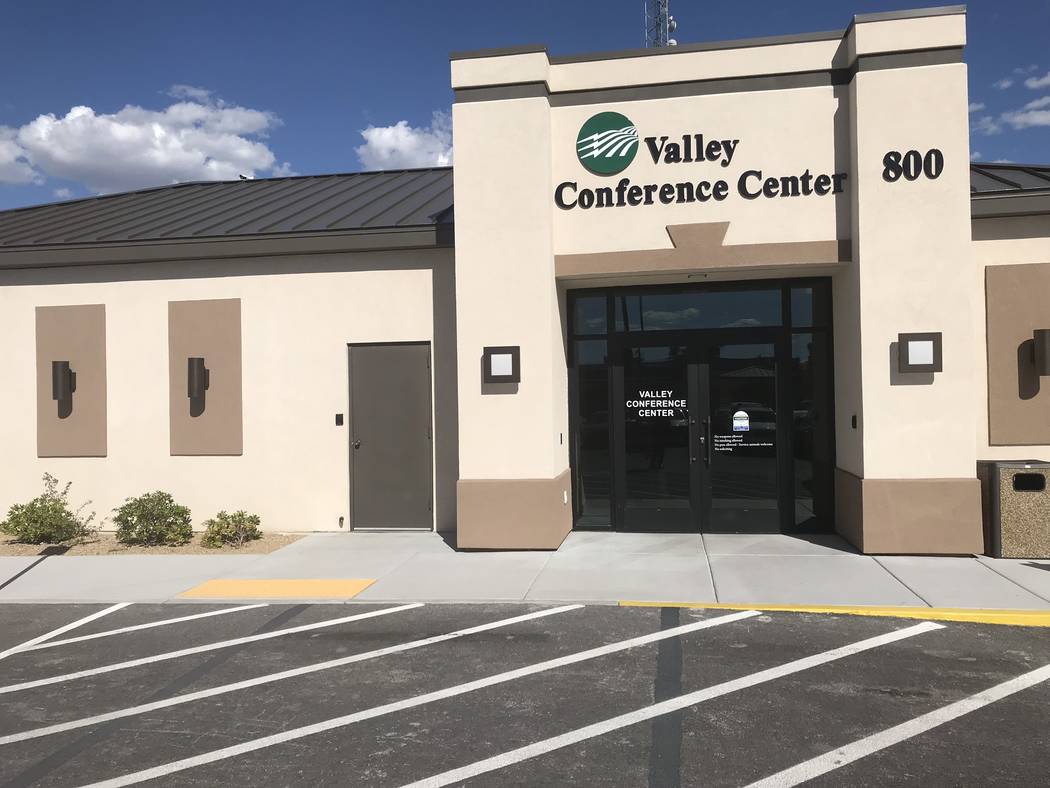 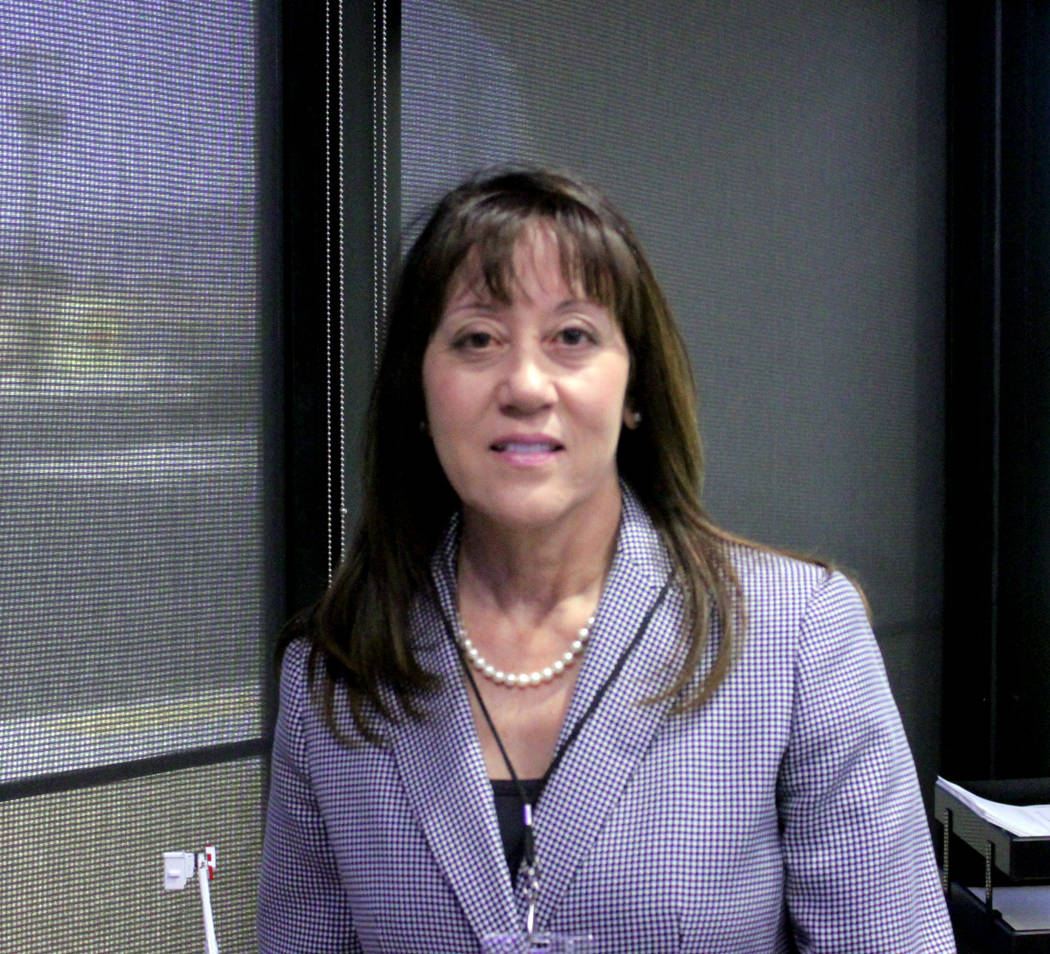 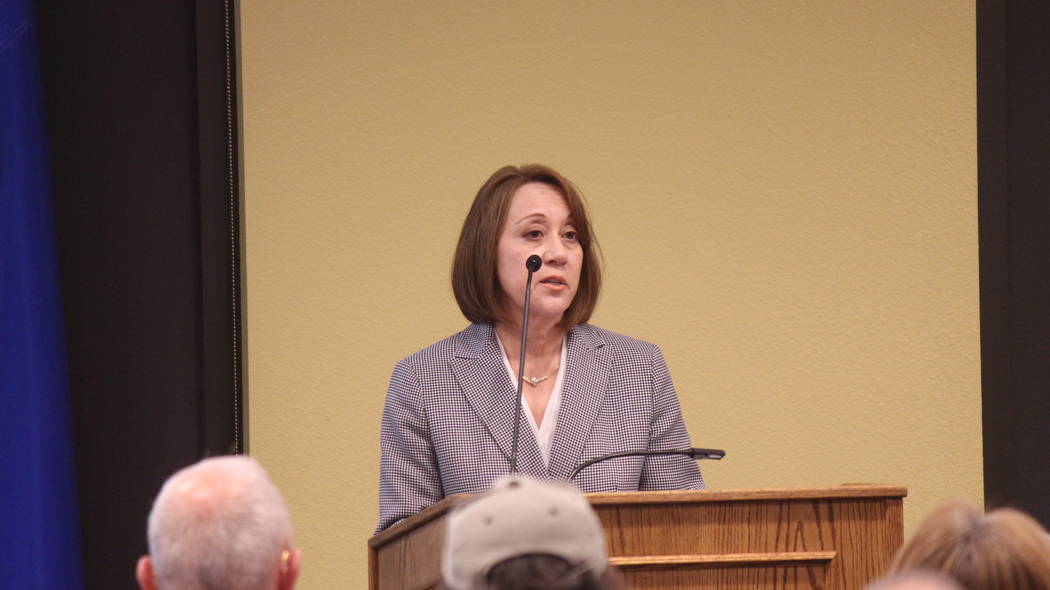 Jeffrey Meehan/Pahrump Valley Times Angela Evans, newly appointed CEO of Valley Electric Association Inc., speaks at the Valley's conference center at 800 E. Highway 372 on Dec. 5, 2018. The event was the first of several events Evans spoke at during her meet and greet tour in December.

The recently named CEO of Valley Electric Association Inc., Angela Evans, spoke about the co-op’s past initiatives and future plans in Pahrump at the start of a tour across Valley’s service area in December.

Evans, who was named CEO of Valley in October, offered insight into the co-op’s plan for its rollout of its fiber-optic system, stability of electricity rates for member-owners and other topics at the Valley Electric conference center on Dec. 5, 2018. That’s the day Evans launched her tour of Valley’s service area, which the co-op had billed as a “meet and greet” with the new CEO in a news release about the event.

“Let me begin by saying that Valley has made remarkable achievements in the past decade through the guidance of its board and its dedicated employees,” Evans said to a room full of member-owners, employees of Valley and others on Dec. 5, 2018 at the co-op’s conference center.

In May, Evans was named interim CEO of the co-op after the sudden announcement by Valley’s board of directors that former CEO Thomas Husted was retiring, effective immediately. She joined the association in February 2017 as executive vice president of operations and was later named chief operating officer of Valley.

Evans has worked at the executive level at utilities for over 18 years in New Mexico, Texas, California and most recently Nevada. Evans is a native of Santa Fe, New Mexico and has a bachelor’s degree in political science from the University of New Mexico.

Evans was joined by board of directors from Valley’s District 1 and 6: Peter Gazsy (south Pahrump) and David Dawson (north Pahrump). Evans also stopped in Sandy Valley, Amargosa Valley, Beatty and in Fish Lake Valley, which was the final stop in the December tour.

Evans spoke about the structure of power at the co-op, stating that, per the association’s bylaws, “the business and affairs of the association are managed by the board. That requires a strong and collaborative relationship between the CEO and the board—one that is based on transparency and trust.”

Evans spoke about her efforts to build a collaborative relationship with the board and the importance she felt to understand the direction the board was leading the co-op toward, she explained.

“…further, our consumer-members look for this transparency and trust in this person selected by the board, especially when it comes to implementing the objectives of the board,” she said. “What better way to demonstrate, than engaging the membership.”

“In addition to relationship building, the board of directors tasked me with managing the cooperative’s business, as well as supporting me in my eagerness to understand the context within which I would be working,” she said.

Evans said by the end of June, there were several matters to address with the co-op.

“At the top of my list was securing a new purchase power agreement for our baseload energy to keep energy rates stable,” she said.

Evans explained that in the recession period of 2008 to 2009, Valley worked to keep rates stabilized, rates that are stable today, she added.

She went on to explain that “escalators that were applied in the latter years of the contracts that we executed” during that recession era would have brought higher prices to the cost per megawatt-hour.

The cost of the electric power Valley purchases comes in at a rate of $35.75 per MWh, which Evans said is a significant decrease.

Another focus Valley has had is on the rollout of its fiber-optic network in Pahrump.

In July, Evans said the rollout of the network was evaluated in terms of what the new network could net in new subscriptions.

“Well, quite frankly, it didn’t mean a lot,” Evans said. “In July, having evaluated the fiber-optic construction schedule, we decided to take a different course.”

Evans said that as a result of an analysis, Valley decided to step back and review its plans for rollout.

“During this assessment period, we determined that a more tactical approach would be to scale back the fiber buildout and concentrate on areas that would generate new revenue through obtaining new subscribers,” she said. “So while 90 percent of the backbone structure is in place, it is those extensions needed to reach individual areas that are our focus now.”

“We set targets for individual subscriptions,” she said. “We allocated our internal resources to achieve these targets. Focusing on these areas, to us, makes the most sense.”

Evans went on to say that “in keeping with the most responsible management with our assets and our resources, all three communities that I’ve mentioned are among the most diversely populated in the community. I’m certain that there are others, but installing fiber to homes constructed in close proximity to each other, helps us hold down costs. Just sort of a footnote, with our aggressive schedule and having multiple contractors in the early part of 2018, we were seeing expenses in the area of $1 million or more for contractors and that is something very hard to keep up with.”

Valley’s fiber-optic network may roll out slower than originally anticipated, but it is rolling out.

“For some of our members, fiber may arrive later than we have hoped, but it is coming,” Evans said. “We regret the delay, but we believe that it is the correct way to deploy our resources.”

Valley is also planning to change course on its use of contractors and consultants as it has done in the past.

“Our organization now is a reflection of our ability to better manage our functional needs with developing a staff, capturing synergies and reducing our dependence on contractors and consultants and obviously that means reducing our costs going out the door,” she said.

Evans, among other topics, spoke about the board’s efforts to participate in an in-depth strategic planning process of the co-op. Questions from the audience were also fielded by Evans at the event.